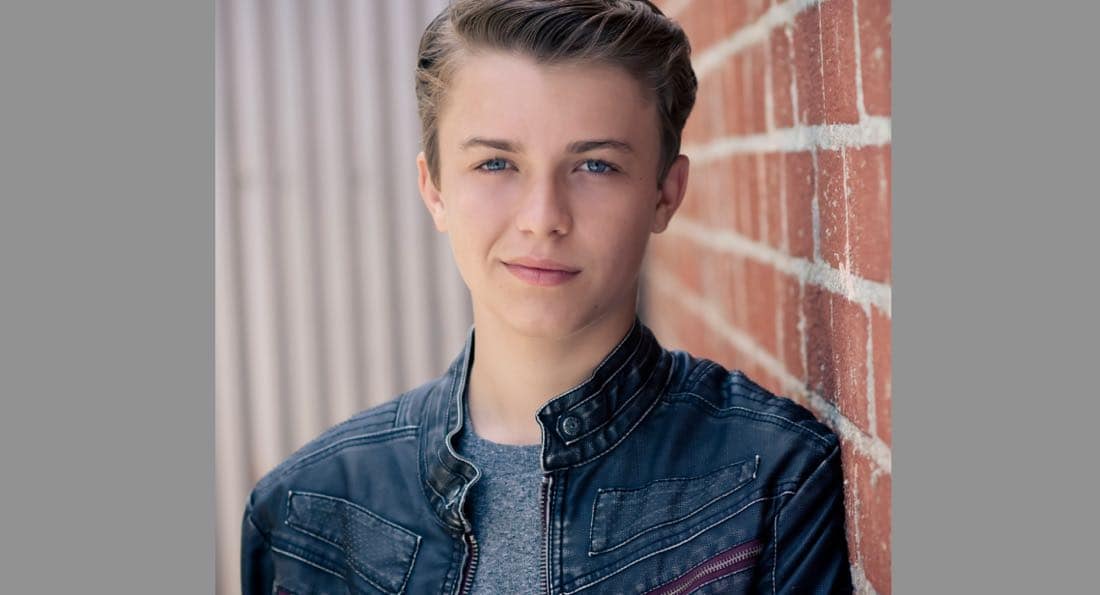 Up and coming actor Jacob Hopkins is already a pretty seasoned vet with over 20 different television and film appearances, including arcs on both HBO’s TRUE BLOOD and ABC’s THE GOLDBERGS.  He also voices Gumball Waterson in the animated youth program THE AMAZING WORLD OF GUMBALL on Cartoon Network.  In an exclusive interview Jacob talks about the fun he is having portraying Gumball and getting to stretch his acting talents in a variety of film and television projects right now.

What drew you to the role of Gumball Waterson in the THE AMAZING WORLD OF GUMBALL?
JACOB:  I was huge fan of the show before I got the role, and I’ve always wanted to voice a cartoon character! The show is super creative and awesome writing!

How would you describe your character?  What do you most admire and/or like about him?
JACOB:  Gumball is a sarcastic, fast talking, witty, but lovable blue cat. He is an adventurous kind of dude! I admire his strong-willed spirit and how he never gives up easily.

What journey does your character undertake in this series?
JACOB:  Each episode can undertake different journeys. The majority of the journeys he takes end up teaching good morals and values.

What was your favorite part about working on this project?
JACOB:  My favorite part is every time I walked into the booth and voiced this amazing dude!

What was the one thing you took away from working on THE AMAZING WORLD OF GUMBALL?
JACOB:  The amazing experience of voicing such a unique and multi-layered character like Gumball and the special bonding with the people who work on this show. I will treasure all of that forever!

What do you hope viewers take away from watching THE AMAZING WORLD OF GUMBALL?
JACOB:  First of all, I hope they are laughing a lot and having fun. I want to them to recognize all the morals and values it teaches. To recognize all the clever Easter eggs that are in the episodes too!

What are the funnest aspects of working in an animated TV series?
JACOB:  Well when you are singing a song about butts, things get super funny. I can’t even tell you how many times I cracked up in the booth because the writing and animation on this show is hilarious!

You also work on ABCs THE GOLDBERGS in the role of Chad Kremp. What was the initial appeal of that role?
JACOB:  First off, the show is hilarious and the writing is awesome! It is so cool to play a younger version of a real life person.

How would you describe Chad?  What do you most admire and/or like about him?
JACOB:  Chad is a good kid raised on good standards and morals. He’s got an inner nerd going on, determined, and a smart person. He’s loyal, a good friend, and willing to walk on the wild and fun side of things with his buddy, Adam.

What was it like working with Sean Giambrone, Troy Gentile, Jeff Garlin and Patton Oswalt?  Who cracks you up the most?
JACOB:  Working with Sean, Troy, and Jeff is awesome and there is never a dull moment! They each bring it to their characters and are so great to work with!

What was your favorite part about working on the show?
JACOB:  Going back to the 80’s is an experience in itself. All of the memorabilia, people, and other things I never experienced in my life now, I get to get to be apart of on the show.

What was the one thing you feel you have learned working on THE GOLDBERGS?
JACOB:  I’m always learning as an actor.

Then what drew you to the film “The Boy Who Cried Fish”?
JACOB:  This was an out of the box character for me to play and to portray an autistic child helped me step out of my comfort zone.

How would you describe your character Adam?  What do you most admire and/or like about him?
JACOB:  Adam is autistic, but super smart and aware of everyone’s emotions and environment. He just has problems expressing it into words. I admire his bravery!

Were there any particular challenges as an actor portraying someone who is autistic?
JACOB:  Yes, autism is very different and I spent time researching and observing various types of autism. I wanted to bring truth and care to the role.

What was your favorite part about working on the film?
JACOB:  I worked with Breeda Wool as my mother, and she was great to work with. The experience of playing an autistic child alone was very unique to me.

What was the one thing you feel you have learned working on it?
JACOB:  I learned a lot about autism and it was an experience I will never forget.

At this stage of your career, what do you think you have learned from the amazing variety of roles and projects you have worked on?
JACOB:  I’ve learned I can be very versatile as an actor. I’m always learning. I enjoy the process very much too.

Has there been any great advice you have gotten?  What advice would you offer to other upcoming and aspiring actors?
JACOB:  Elizabeth Banks told me once to stay true to myself and never sell out to the cheap materials.

Do you have any other upcoming projects that you can share that fans should keep an eye out for?
JACOB:  Keep an eye out on “The Nerd Posse.”

What do you aspire to do next?
JACOB:  I would love to be in a super hero movie or voice a super hero. I am a HUGE Marvel and DC Comics fan!

To see more of Jacob’s wonderful work, be sure to tune in for all new episodes of THE AMAZING WORLD OF GUMBALL airing on Thursdays at 5:00 p.m. on the Cartoon Network, and new episodes of THE GOLDBERGS on Wednesday nights at 8:00 p.m. on ABC.  His upcoming films  “The Nerd Posse” which will be released on April 9, 2017 and “The Boy Who Cried Fish” coming Summer 2017.