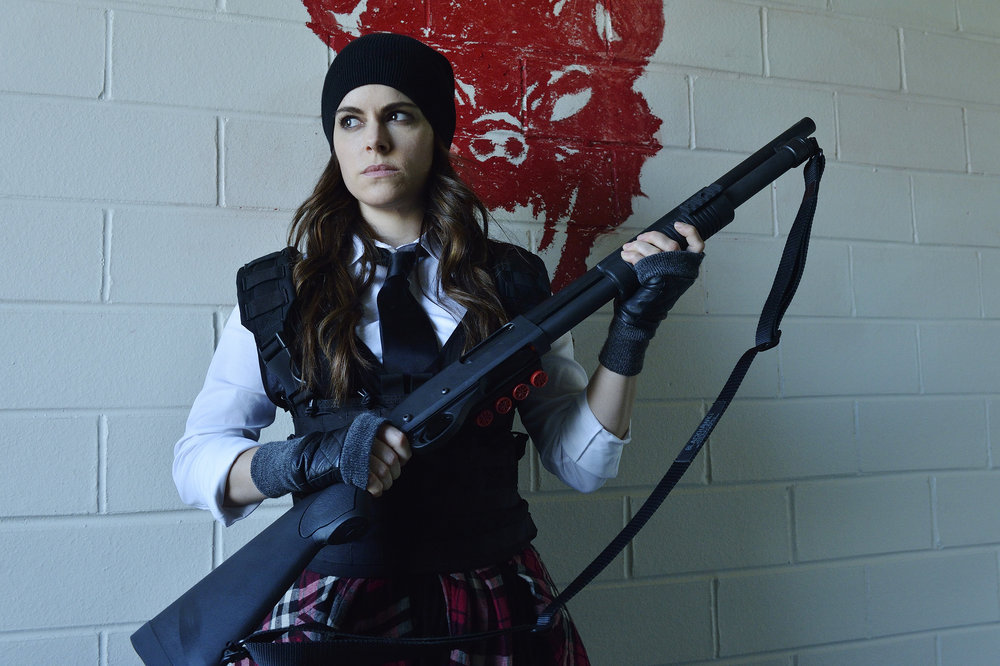 For fans and viewers tracking the breakout past year of Emily Hampshire, it has been an extraordinary thrill ride watching her currently in the Canadian comedy series SCHITT’S CREEK and the Syfy drama series 12 MONKEYS. In both, Emily demonstrates an innate ability to deliver even the straightest lines in a way that evokes laughter and then can seamlessly slip between hilarious comedy and pain-searing drama with the turn of a her head. In SCHITT’S CREEK, Emily portrays Stevie Budd, a young woman working as a front office clerk at a roadside motel, which has become the residence of a formerly wealthy couple and their adult son and daughter as they stubble to find a new way to live and carver out new lives in the tiny country tow of Schitt’s Creek. In Syfy’s 12 MONKEY’s Emily portrays the complex Jennifer Goines, a gifted scientist whose grasp on reality cracked after she witnessed her entire scientific team slaughtered and she became an unwitting pawn in a fight to save the future from a deadly global pandemic and later to stop time-travel messengers from tinkering with the timeline to manipulate it for their own ends.

In an exclusive interview during this summer’s Television Critics Association tour, Emily Hampshire provided a few nuggets about what is coming up for SCHITT’S CREEK and 12 MONKEYS.

What is SCHITT’S CREEK basically about?
EMILY: SCHITT’S CREEK is a show on Pop, with Eugene Levy and Catherine O’Hara. It’s them and me. They portray a family who were really rich that’s lost all their money, and they have to go live in a town called Schitt’s Creek, which they bought as a joke. It’s a great show. [Laughs] It’s totally different from 12 MONKEYS.

Isn’t Tim Rozon on that as well?
EMILY: Oh my god, yeah. He was on our first season and came back for the end of the second season — that is ’cause this past season he’s been on WYNONNA EARP.

Another fun Syfy show!
EMILY: Yeah, I actually was just with Tim at his restaurant because I’m shooting something in Montreal. If you ever go to Montreal, you have to go to Tim’s restaurant. It’s amazing. Like if you think he’s a good actor – like he is a great actor – but he’s also home to the best restaurant in Montreal.

On that recommendation, I definitely will. So what’s next on SCHITT’S CREEK?
EMILY: Well, we’re going into our fourth season. I shoot 12 MONKEYS from October to March, and then go right back into SCHITT’S CREEK.

Dang, you are busy having just done two seasons on 12 MONKEYS and three seasons on SCHITT’S CREEK.
EMILY: Yeah. I’m like so glad that both of them are good because I get to do the complete polar opposite, like SCHITT’S CREEK is a half hour comedy and I play this girl at the motel like kind of sarcastic. My name is Stevie on the show, which I think says everything. Like I wear Converse and jeans. It’s so easy a job and lovely. Then I go to 12 MONKEYS, which is like the hardest job in the world but like so rewarding.

I thought your performance last season on 12 MONKEYS was astounding and just remarkable.
EMILY: Oh my god, thank you! I feel like I get the best stuff in the world to do. Like to get to play older Jennifer is like a gift. It is cool that I get the opportunity to do that. I mean, like I know a lot of actors who like are so great and they just don’t get the chance – and suddenly I got the chance to do both of these things. [Laughs] I think that is because I had such shitty years before; like I’m getting it all back now. So I feel okay with it. But, yeah, I do realize how like lucky I am.

Do you have any extra time in your schedule or do you just do back-to-back between the two shows?
EMILY: Actually, the only available time I have in my schedule is right now and I am shooting this movie in Montreal called “The Death and Life of John F. Donovan.” It is amazing. The cast. It’s Natalie Portman, Kit Harrington, Jessica Chastain, Kathy Bates, Susan Sarandon, and me. [Laughs] But my part’s the best! Xavier Dolan is the director and he’s an old, old friend of mine, who wrote me this part like four years ago and all these people signed on. I was worried that my part was going to be given away to someone – because it’s like the best part. And he’s like, “No, you’re doing it.” So it’s finally happening.

Fun! So you are having a “killer” year, acting-wise, aren’t you?
EMILY: I feel like that, yeah, like there’s nothing I like to do more than work. [Laughs] You don’t want to see me when I don’t!

So you kind of go a bit “Jennifer Goines” in your spare time then?
EMILY: [Laughs] Yes, yes. And I’m so excited to get back to that [role]. I was actually just talking to Terry Matalas, our creator, and like he is in the writer’s room now, and he was giving me some like sneak “insider stuff” because I was like, “How are you going to top last season?” which I thought it was so great. And I’m like, “You can never do anything better than the old Jennifer and young Jennifer [scene].” But he has. And I can’t talk about that. [Laughs]

That young Jennifer and old Jennifer scene was incredibly beautiful.
EMILY: Like that scene killed me. I loved doing that, but then [Terry] came up with stuff that I can’t believe is better.

Fantastic! I know the 12 MONKEYS fans will be looking forward to that.

Look for SCHITT’S CREEK Season 3 to premiere in January 2017 on CBC in Canada and on Pop Channel in March 2017 in the U.S., with Syfy’s 12 MONKEYS Season 3 to premiere in early 2017, as well. (More information about SCHITT’S CREEK can be found at: http://www.cbc.ca/mediacentre/schitts-creek.html#.V7zZzoWMU4A For those wanting to check out Emily’s work in Syfy’s 12 MONKEYS, Seasons 1 and 2 are currently available on Netflix. )