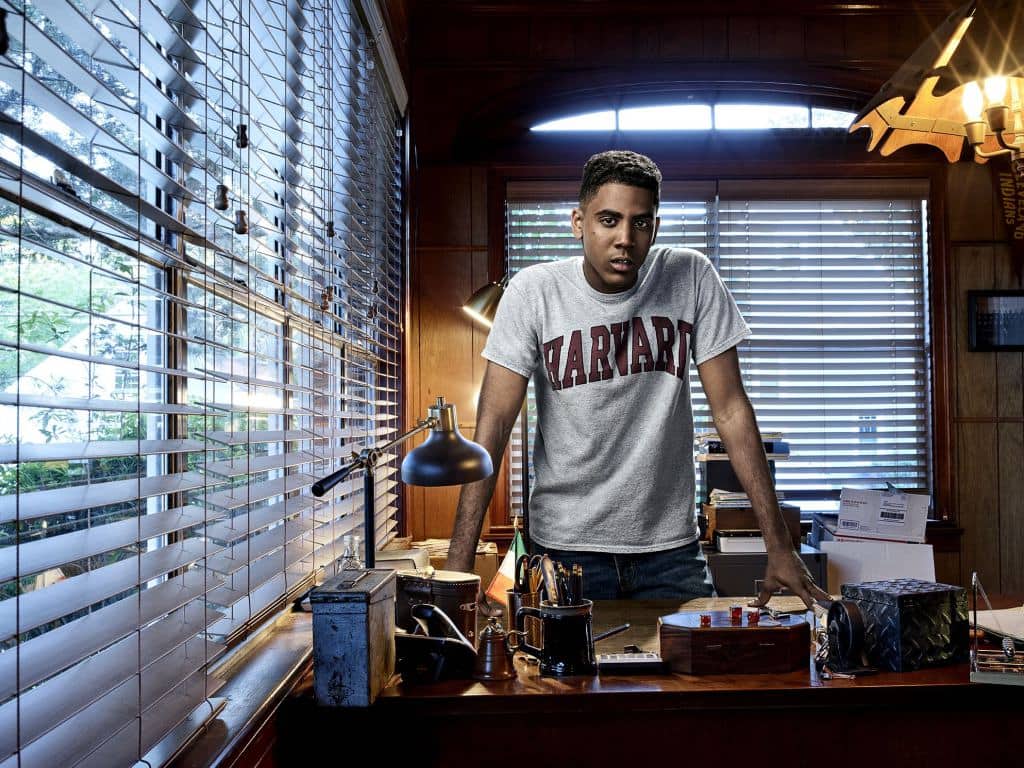 In the creepy horror television series MR. MERCEDES, based on the Stephen King book of the same name, the MR. MERCEDES story examines the fractured psyche of a madman. In the hunt for a mass-murder who shows no signs of remorse, the lead detective finds himself prodded out of retirement by a gauntlet thrown by the killer himself. Aiding the detective is a helpful young man who knows a thing or two about computers and he offers his assistance to help track the killer through his taunting emails. In an exclusive interview, Jharrel Jerome talks about the elements that appealed to him about jumping into the evil-skewed world of MR. MERCEDES.

It seems like your character Jerome has an inquisitive side by offering to help. How would you describe him?
JHARREL: Like you said, very inquisitive. He’s definitely maybe one of the more uplifting characters. Up beat, never really feels down. He’s very confident. He’s always curious. He’s always down to help. He’s always loyal to the people around him, especially Hodges. He spends his time, not knowing what he’s looking for, but looking for something. It’s interesting because he’ll never give up and he’ll never say: forget it. He’s always down to fight the fight. That’s kinda what’s interesting about him is that you can really trust him. He’s one of the characters where you look at him and can say, “I can trust him, I can trust that.” You know that they’ll figure something out because he’s around.

Does that come back to bite him a lbit?
JHARREL: Oh, most definitely. It’s funny because in the first few episodes, he has no idea what he’s looking for. He’s on the computer and Hodges, who’s always been a little off, especially after retirement and who’s always been sort of crazy, is asking me to dig through his computer. Saying that, “this popped up, but it’s gone now” and “this is this and that is this.” He’s always asking a question. I think, in every episode, Jerome has at least 3-4 questions to ask. As it gets further into the season, he starts to realize that it’s so much more. It’s almost life threatening. And he’s going to Harvard. He hasn’t even stepped into the college field yet. So, for a high school student to go through all of this, it teaches him a lot.

It’s a life lesson, even though perhaps he was not expecting it exactly that way.
JHARREL: Right. It’s a huge life lesson. Life and death lesson. It’s definitely something he wasn’t expecting.

Young people tend to think, “This is kinda fun. I can pursue this intellectually.” They never see ramifications.
JHARREL: So much fun! No. You almost feel like a detective. They’re drawn to it. Feels like the young Watson to the Sherlock — and he even said that once: “I’m your Watson, Sherlock.” When a young teenager feels like he has a big responsibility, especially next to an adult, he takes it and he runs with it. It’s just that he doesn’t know what he is going up against, in time. But he almost doesn’t care. It’s kinda like, “I don’t care what we’re up against. I want to do it, I want to help you, and I’m going to be in it for you.”

What sparked your interest with this character and this project?
JHARREL: I love the craft. I love embodying someone who is not me. I have definitely never got into Harvard. I definitely did not have the grades that were up to par. He’s so smart and he’s so wise beyond his years. Jerome, in specific, was way different from the character named Kevin that I played [in “Moonlight’]. Just in every way. When I read a script and I see a character that I’m going for that is nothing like I’ve done before, I always want to do it. I always want to jump into that. Jerome is so fun. I would want to be friends with Jerome. I would like for Jerome to be in my life to help me with my computer issues. I want a personal Watson, who if I say, “There’s a killer coming after me, I need your help,” will be down. There is a killer, you know. He has this naivety to him. He’s a little naïve. He’s a little young. He may be wiser than his front [that he wears], but at the same time, he’s still learning so much. He’s still experiencing so much. He has around adults pretty much all the time. Bill Hodges [Brendan Gleeson] is sort of his mentor, in a way.

It seems like wJeromeants to be challenged too. He’s not a person who just wants to coast. He wants to try something.
JHARREL: No, he doesn’t. That’s why he’s going to Harvard and that’s why he’s continuously studying things on his computer, even when Bill is not around. He’s digging, and he’s coming back with more information. That’s intriguing, in itself, to see someone so driven.

For you, as an actor portraying this character, what did you kind of take away as whole experience?
JHARREL: I learned more than I’ve ever learned before. I mean, I had to leave school to do this project, which was definitely a big step for me. It made me very nervous stepping into the process. It’s almost like leaving my friends and my peers to jump into a TV set with legends like Harry Treadaway, Brendan Gleeson, Jack Bender, Kelly Lynch. I think: “How do I fit in? How do I squeeze into a cast like this?” The moment I got there, it was so lighthearted. It was so fun. They didn’t treat me as though I was a newcomer. They treated me as a distinguished actor, who is with them to create this story with them. As an actor, I learned that — well aside from the quick pace of TV and learning to jump into things quick — you can take your time with actors who you’re inspired by. You can learn from them rather than fear them or act a certain way. I felt like I had to maybe be a certain person around them, but I cracked jokes, I was myself, I really felt like myself on the set. I kinda learned how to be myself on a TV set and it was my very first one. I also just learned how to move quick. How to go from this to that. How to do episode two before episode one and jumping around. That was also a tricky one. It’s hard. You read the script and then you end up doing your last scene first or your third scene second. It’s hard to jump like that. But it challenges yourself as an actor. Challenges your mind to stay within the piece as a whole and not look at things as individual scenes but look at the piece as a whole and as your character. I read the book “Mr. Mercedes.” It’s so amazing to see how many things were incorporated from the book into the TV show. It was kinda cool to see the writing process behind it. I also have aspirations to be a writer. To see what David E. Kelley did just from reading a book and then turning it into portrait characters. It’s incredible.

Were you familiar with his early work?
JHARREL: No, not David [E. Kelley]. Jack Bender, most definitely. I saw LOST and it’s incredible. I also saw UNDER THE DOME, and appreciate it as well. But David E Kelley, no. I had to research him after, but a legendary man. Both of them, and they’re a great duo together as well. It’s been exciting.

To see whether Jerome can stay out of the cross-hairs of a psycho-killer, be sure to tune in for the premiere of MR. MERCEDES on Wednesday, August 9th at 8:00 p.m. on Audience Network available to DirecTV subscribers.