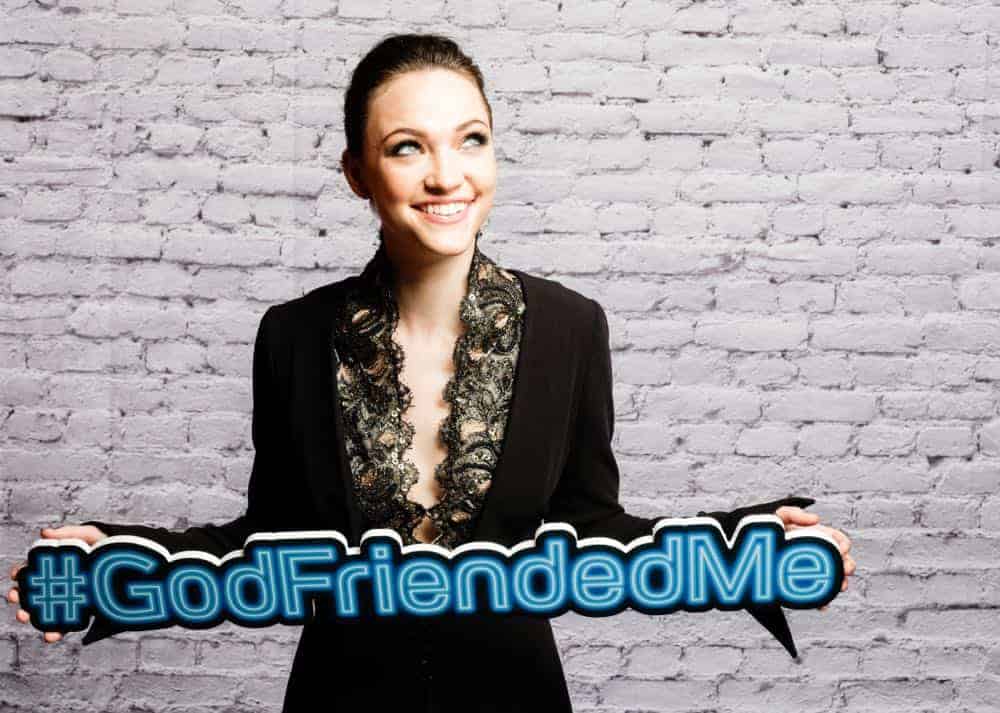 Certain to capture your heart this Fall is the new CBS drama series GOD FRIENDED ME. It is a delicious blend of love and laughter. It follows a young twenty-something as he tries to launch his podcast career and finds himself embarking on an extraordinary journey when he accepts a Facebook friend-request from God. In an exclusive interview, Violett Beane previews how her character Cara fits into the story of one man’s journey of self-discovery as God introduces him to seemingly unconnected individuals who will change his life and their own in the process.

Why did you want to do this show?
VIOLETT: GOD FRIENDED ME is a really uplifting show, and I feel like in the world that we’re in right now, it’s something that we need. I think, I was feeling that same way during pilot season last year when I was going in to multiple auditions every single day for a few weeks at a time. But it was just a really positive feeling and it left me with a good message. I really wanted to be a part of it, so I’m happy that I got to.

Cara Bloom becomes the audience’s way into this story. How would you describe her? Who is she?
VIOLETT: Cara is a writer for an online publication and, in the pilot, you see that her mom left when she was a little girl and that she hasn’t really ever dealt with that. She actually came to New York. Her whole purpose in life has been to find her mom again and ask her why and get some closure for it. In the pilot, she does. She finds her and she talks to her. It’s pretty life changing for Cara. I think that is why she sticks around and tries to figure out who this God account is and make some new friends along the way.

What is it like working with Brandon (Michael Hall) and Suraj (Sharma), doing all this crazy stuff?
VIOLETT: Oh, it’s amazing. The guys are so great. I actually got to do a chemistry read with Brandon before I was cast, which is always awesome, but right off the bat, I was just like, “This guy is so warm and so friendly, and he’s the exact same way on set.” He’s a great partner to be doing all this with, and Suraj is amazing as well. And Javicia [Leslie] and Joe [Morton], everyone. It’s really fun.

Have you got the chance to work with Joe yet?
VIOLETT: Our characters haven’t met yet, but I’ve seen some of his scenes and obviously the table read stuff and hung out with him. He’s just such a tool. I’ve learned from him every time I see him do anything. He’s wonderful.

You are all so upbeat on screen. It just looks like it’s a fun bunch of people we want to spend time with. How would you describe the dynamic of Cara and Miles (Brandon Michael Hall)? Where are they? Is she looking at him as strictly as a story or is she intrigued by him? What’s going on?
VIOLETT: Yeah, I definitely think there’s some intrigue on both ends. They’re both quizzical people and they push each other because they come from different perspectives, Cara being the somewhat believer and Miles being a non-believer. They push each other’s buttons and it definitely gets a bit flirty, so I’m excited to see where it will go.

What does she think of Rakesh (Suraj Sharma)?
VIOLETT: Rakesh finds it kind of funny — useful but also kind of funny — because to her, she’s all about finding a way to get to the story legally, if you will, so she can write about it. They have a great little bantering chemistry too.

What is your favorite theme you will be working on in the show?
VIOLETT: I love the group scene where we’re all together, because they’re fun to shoot, but I also have really been enjoying my scenes with Rachel Bay Jones, who plays Cara’s mom. We, actually, when we were filming the pilot we went and saw her show on Broadway. She was on the “Dear Evan Hansen.” That was before I filmed with her, so to see her on a stage owning it and being so compelling, and then to get to work with her has been really amazing.

It sounds like you’re discovering a lot about yourself as you’re working on this show. What surprised you about all this experience?
VIOLETT: It’s been a lot of change because I had to move to New York to film. That in itself has been a journey and an experience. It’s really cool. It’s nice to know that you can just kind of up and move and figure it out. I feel like it’s really eye-opening, and there’s just so much diversity here and things that I didn’t even know. I’m constantly out doing stuff and meeting new people. New York has been really great.

The show has already made quite the impression on your life, but what has the experience of being Cara done for you? How do you feel different because of her?
VIOLETT: Cara doesn’t let anything go, which I think is a pretty cool aspect of her. She needs to get to the bottom of things, and I think that has kind of impacted me. She’s intrigued by the world and to be a writer, you have to be interested in everything. I think that was, to me, the perspective as well, to be more interested in people and their lives and everything around me.

Cara is obviously a bit tenacious, and she’s obviously a bit curious. How is that going to impact who she is as she’s pursuing, finding out who’s behind the God account?
VIOLETT: Yeah, I’m interested to see what will happen with all of them. They all bring different aspects to the team, right? That’s what makes them a great team. She’s curious and she won’t let things go, and Miles is coming at it from an atheist perspective of realism, if you will. He has a harder time believing it and then Rakesh is coming at it from a, “This code is amazing. I have to hack it.” So, they’re all very dedicated to figuring out what the God account is. They’re also helping people along the way, which is pretty amazing. I think, for Cara, she really felt that warmth as being … She’s the friend of the weak, the first friend suggestion. She felt that when Miles helped her find her mom, so I think she has a connection with everyone that she’s able to help. She feels like she’s paying it forward and giving back to the world.

It is a beautiful and touching show. I was very surprised when I first watched it. What was your reaction when you first saw the first episode?
VIOLETT: Oh my gosh. It was crazy. We spent a few months filming this thing and we got to finally see it put together, and some of it was rearranged and edited and changed, but it was so magical to see it. Actually, I’m really excited because the network and our show runners and everyone have decided to air it, but just the pilot about a month early, so I don’t know when this article will be coming out, but … Probably after. But it will be available online for streaming, so people can watch it and get excited for it.

To see more of the heart-warming episodes of GOD FRIENDED ME, tune in Sunday nights starting September 30th on CBS. For more sneak peeks and exclusives, be sure to follow the show on Twitter @GodFriendedMe. Then to keep up with Violett’s continuing adventures, you can follow her on Twitter @ViolettBeane.