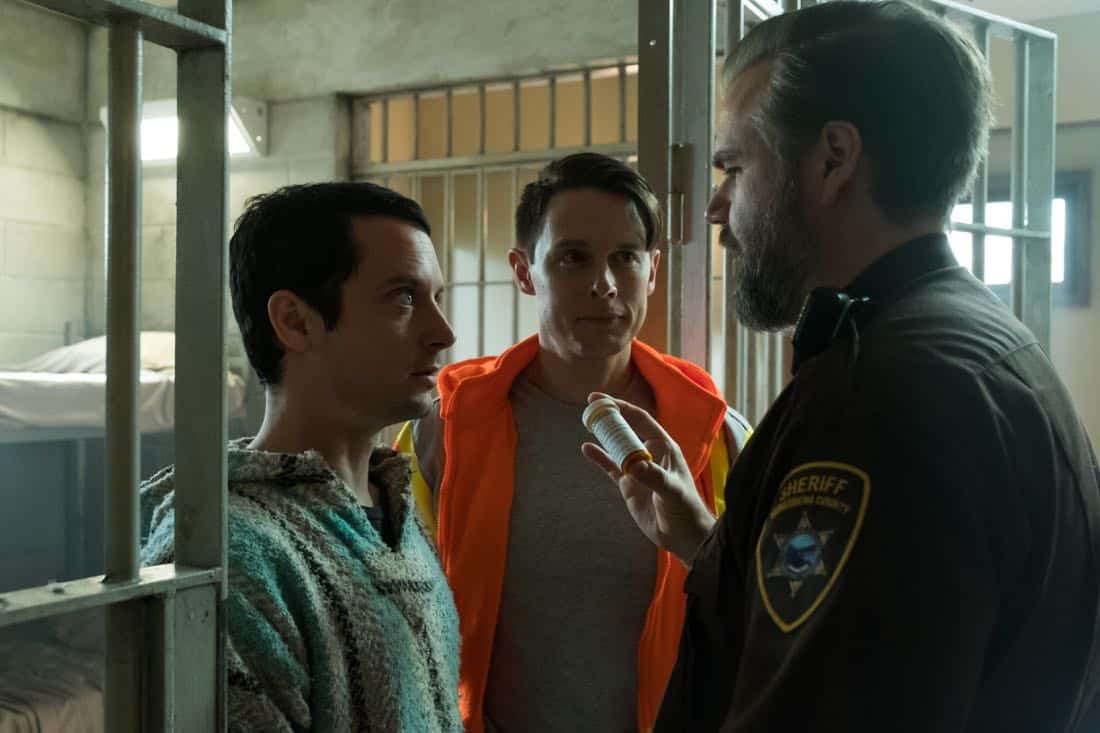 While attending last summer’s San Diego Comic-Con the cast of DIRK GENTLY HOLISTIC DETECTIVE AGENCY was in attendance to preview Season 2 and the continuing wacky, outrageous adventures through the twisted timelines. Here is what was gleaned from the interview with executive producers Max Landis and Robert Cooper:

Let’s talk about the women characters. You broke down each one and yet by the end of the season their transformations were kind of cool. Why are you choosing to spotlight them that way for your show and then how is that going to continue into this next season?

MAX: I can speak to that endlessly. I don’t know how familiar you are with my work, but I write losers. I don’t write winners. I don’t write experts. I only write losers. If they’re good at something, they have to be bad at something and if you’ve seen … I don’t know if you remember “American Ultra,” Phoebe — Kristen Stewart — is the hero of that film, even though it’s hidden at the beginning. The same for “Mr. Right” with Anna Kendrick as Martha. The characters within DIRK GENTLY are all losers. They’re all people who are missing something. I write female characters identically to the way I write male characters in that it has to be a person who is missing something they need and had something broken inside of them that stops them from getting it and has a special skill that pushes them towards it, inexorably. When you’re dealing with someone like Farah Black, a person who spends the first episode of our show tied to a bed and then becomes the action hero of our entire show, even more so in Season 2. Season 2 is Farah’s season. I don’t think of her as a female character. I think of her as Farah Black. She has goals, she has ambitions, she has things she needs. In this season, the things we’re able to give her and things we’re able to let her chase. For her part, Amanda’s story line this season — and the new female characters in this season are probably the best characters — Amanda Walsh’s character is something else. Of course, Izzie Steele, Tina Tevetino. It’s exciting to take actresses and make them ridiculous heroes. It’s too easy to make them experts or girlfriends.

ROBERT: Well, they’re not defined by their relationships. Also, I mean my response to that is that I guess ideally you’re not thinking about let’s take female characters and empower them. Let’s just write all good characters: men, women, aliens, dogs — and have them all have well-rounded story lines and interesting things to do.

MAX: I think in a lot of shows like this, women get As and Bs and no Cs. Here’s who I am, here’s what I do. There’s no: here’s where I go. Our show is a “here’s where I go” show. I mean, second season, there’s so little we can say without spoilers and even what happens with Amanda in this season. Amanda and Claude’s sister. We sort of hinted that something big might go on in the first season, but how big, no one has any idea. It’s so cool. I’m excited for it.

Whereas you always gave your males characters an unraveling type of story. Like Todd was on that path to discover kind of who he really was, but by the end of it, you’re like, “Oh, wow, now you’ve added this extra burden in his life.” I don’t know, it’s kind of an interesting twist in the sense that his sister Amanda was stronger at the end and then it seems like he was taken down a peg by the end.

MAX: You’re going to like Season 2. You know, apologies aren’t enough. Apologies aren’t enough in real life or in TV. Just because you say you’re sorry, it doesn’t mean it’s not still inside you and it doesn’t mean it’s not still inside the other person. We wanted to give Todd something to think about and that’s a problem for him in the second season.

Have you heard of any fan theories that you really liked or that affect your choices or fans have gotten into your heads?

ROBERT: I don’t know. I mean, I haven’t really engaged in that.

ROBERT: I was just delighted to see people pick apart Amanda’s visions in the first season. You did show me that one. There was like a YouTube mash-up that somebody did a 12-minute thing literally on what he just talked about which is that everybody on the show is a nerd, but it went further into that.

MAX: Even the villains.

ROBERT: About how and why they are identifiable to people. That there’s always something for people to feel like, “Oh, that’s a bit of me in them.”

MAX: Mainly the stuff I see … one of the things I enjoy online is how much gay stuff there is. That’s always a fandom that I enjoy engaging with. You know, I’ve always felt that some shows – they start sort of gay-baiting, like putting out flirty, weird moments that are for the fans and I’m not really interested in doing that. We don’t not engage with it this season.

ROBERT: The thing is about the show is we kind of engage with pretty much everyone. That’s just in the range of fire.

What can you tell us about the new characters this season and how they’re going to shake things up?

ROBERT: Well, there’s an interesting Easter egg for people who watch Season 1. There’s a lot of echoes of Season 1. For example, you’ve had two police officers who were sort of the button-up, straight and narrow.

ROBERT: The normal people, the point of view of the audience. This year you have two police officers who are introduced, but what I think you’re going to love is how are they introduced. I would define them as kind of like fans of Season 1.

ROBERT: I’ll be interested to know at what point people figure out or remember that the cops in Season 1 died horribly.

MAX: Yeah. In fact, that everyone who wasn’t the main character in Season 1 died horribly.

ROBERT: I’m not sure whether that will temper whether you’re falling too deeply in love with them, because you’re worried: are they going to survive or not? One of the fun things about DIRK GENTLY is that it does reset at the beginning of every year. There’s a new case, there’s a new setting, a new world.

ROBERT: And whole new groups of characters that really put a twist on the challenges our heroes face.

MAX: Easy, easy, spoilers. There is a second television show hiding inside of Season 2 that gradually takes over in Season 2, but the less we say about it, the better. I’ve actually never seen a show doing anything like it. That’s not to say it’s perfect and wonderful, but it’s weird and cool.

Overall with all the competition, why is there more television here at Comic-Con than ever before?

MAX: Oh, I can answer that question. To me, it’s obvious. Television is personal. Film isn’t personal. Film is about the ego; television is about community. A film you watch alone, even though it’s communal, you watch it alone. You have your interpretation. This is my fucking criticism. Television, you watch it 1:00 a.m. on a computer and you watch and you talk about it. The reason pro wrestling still exists isn’t because people believe it’s real. You go online and you talk about it. Comic-Con isn’t about this and it never has been and it never will be and it doesn’t exist for this. Just for the people who are sitting out on the lawn and in line like I used to be, going, “There’s no way fucking way Hulk could beat fucking Saint of Killers from Preacher in a fight.” Saint of Killers guns could kill anything. It’s about engaging fans.

ROBERT: I think, frankly, television just realized that genre was terribly successful in the feature world and eventually started catering to those audiences and said, “Look genre can work on television, too.” Where you used to have one or two or three niche genre shows, now there’s probably more genre shows than there are straight drama.

MAX: That’s really true. We are in the age of RICK & MORTY and it is lovely to be here!

To see what special twists and turns and character revelations will be sprung upon fans, be sure to tune in for the Season 2 premiere of DIRK GENTLY HOLISTIC DETECTIVE AGENCY on Saturday, October 14th at 9:00 p.m. on BBC America.