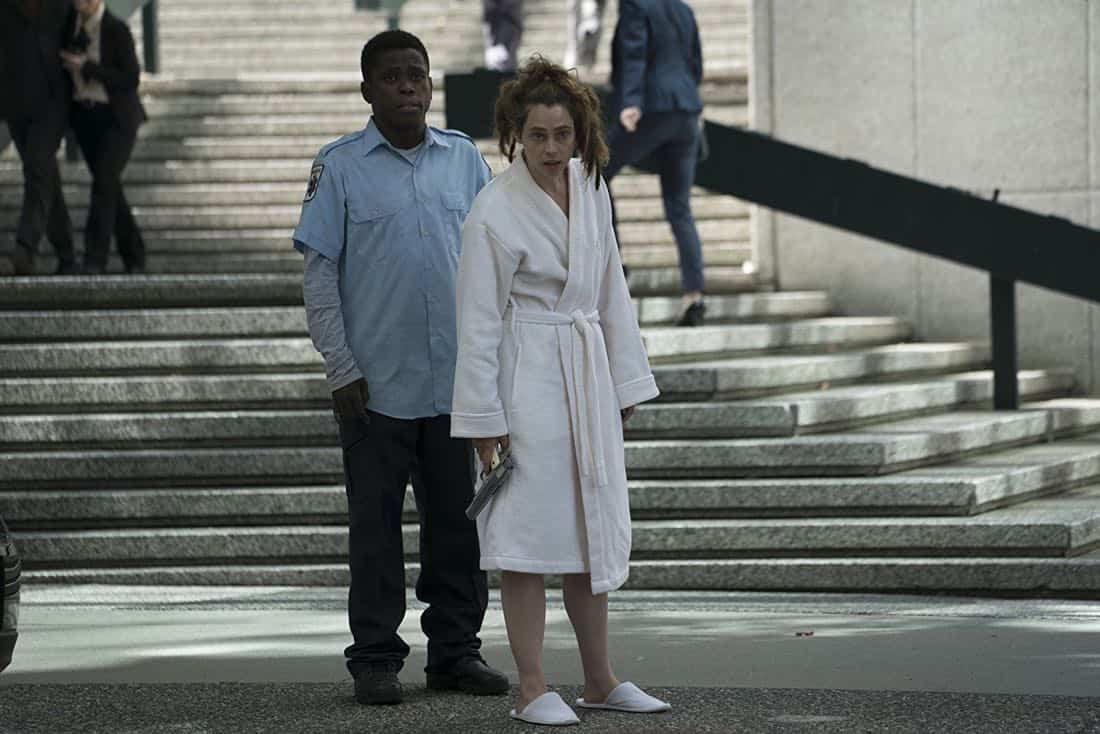 While attending last summer’s San Diego Comic-Con the cast of DIRK GENTLY HOLISTIC DETECTIVE AGENCY was in attendance to preview Season 2 and the continuing wacky, outrageous adventures through the twisted timelines. Here is what was gleaned from the interview with stars Fiona Dourif and Mpho Koaho:

Now that Black Wing has been suspended, we heard there might be a small time jump.

MPHO: You know, I keep speaking to this, but I don’t think Ken ever had a friend like Bart. So I think Ken likes being looked for. I think Ken appreciates that very much. And I tell you what: Ken can’t save himself. I think we’ve established that. Stolen Ken needs his Bart team to come through and save the day. So, hopefully, that picks up first. But, Sir Kenneth is going to continue to grow, not only a pair, but I feel like Ken is becoming a man. He’s living up to his potential. That’s what I think. Smart guy, never really knew his capabilities, and I think Bart let him know, “Hey, you can be something. There’s more to you than even you know.” So it’s a great relationship with them and definitely hope to see more of it.

If you could have a work-related superhero power, would what it be?

FIONA: In the work place? Interesting. No superhero power. I’d more just want it to be, you know, an impulse because I feel like in my life and in my career, the thing that gets in the way is like wanting a social interaction to work out smoothly. So I’d stop myself from saying things. (Laughs) I notice most men don’t have that impulse problem.

Have you guys heard any fan theories that you like that affects the character. Like, you ever come up with theories for your own characters that kind of like affects like how you play them, and how the story figures out?

MPHO: In terms of fans, the only thing I really don’t like is when the fans come at us, like when they ship Bart and Ken. I do not in any way support that. So, outside of that, I’m very much up for any fan input, whatever they think Ken should do, shouldn’t do, should buy, not buy, purchase stocks in, etc. But just that shipping stuff, get out of there with that. This is not the CW. So Bart and Ken are not a couple.

Did you find these roles actually to be more physically challenging than you were anticipating when you first got the role?

What about you, Fiona? This was a really bad-ass role for your character.

FIONA: (Laughs) Yeah, it was physical for me. But also in a fun way. Like they asked me to not choreograph any of it. They didn’t want me to know how to shoot a gun or to know how to kill people. Like, the force of the universe is going to inform me. So it felt also really creative. It just felt like a dance almost. I felt like some of the killing scenes felt like some fucked-up alternative dance – like I just thought of something. But it’s really creative. You get to do something that feels just faithfully my own. Bart’s vulnerable, but she doesn’t have the social insecurity that we were raised with because she never had it.

MPHO: That totally makes her bad-ass. That social insecurity you’re talking about, I think illustrates that I don’t give a fuck. Just that kind of blank look you get. I just look at you and I go, “That girl don’t play. She does not give a what.” You know?

So is Bart on the blood trail of Dirk again this season to take him down? I mean, when they came face to face last season they both kind of didn’t want to do it. She didn’t seem to want to beat him.

FIONA: That’s very confusing to me. Deeply confused by what Dirk means. No, I’m not looking for those two to meet face to face again.

What do you see about how the dynamic between Bart and Ken will evolve in the new season?

MPHO: Well, I’ll tell you what, we going to stay best friends. That’s not ending. That’s my best homie, you know? Bart is. Bart’s done so much for Ken. Ken, I don’t know if Ken would be a whole human if it wasn’t for Bart challenging him and scaring him.

MPHO: I mean that. It’s a great relationship. It’s a great dynamic. Ken has a lot of growth to do just from being not afraid to walk out of the house type of stuff, and I think Bart helped him get to that place. You’re going to see Ken be less scared to walk places by himself. For real. Because it felt like Ken was just scared to leave his laptop before he met her. So Bart gave him a little kick in the butt.

To see if Bart can locate here wayward friend Ken in time to save him, be sure to tune in for the Season 2 premiere of DIRK GENTLY HOLISTIC DETECTIVE AGENCY on Saturday, October 14th at 9:00 p.m. on BBC America.