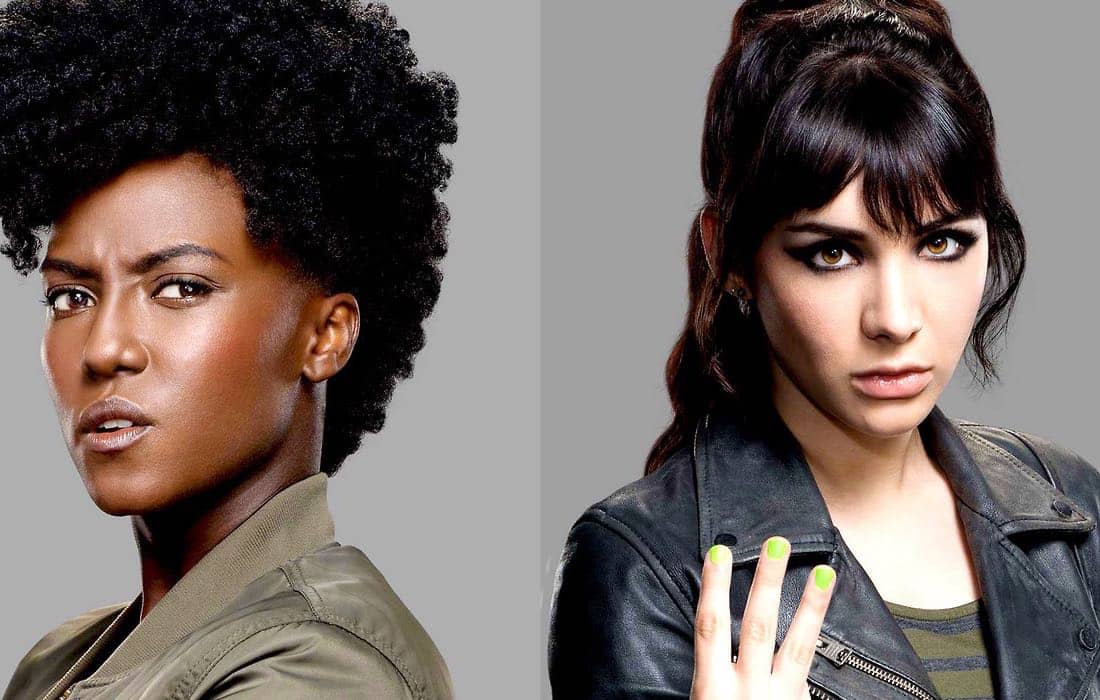 While attending last summer’s San Diego Comic-Con the cast of DIRK GENTLY HOLISTIC DETECTIVE AGENCY was in attendance to preview Season 2 and the continuing wacky, outrageous adventures through the twisted timelines. Here is what was gleaned from the interview with stars Jade Eshete and Hannah Marks:

Where do we pick up with Farah in Season 2?

JADE:  At the end of Season 1, they’ve formed the detective agency and it’s wonderful because they’re trying to find other weirdos like themselves. And then, that lasts for about two minutes. Then Todd gets kidnapped, so we kind of start off with Season 2 with Farah on the run, looking for Todd and that takes her and Todd into a town called Burg, an imaginary town made up by matter in the middle of Montana. Basically, they are embracing kind of their past in first season, how everything is manipulated in the universe to guide them, and Farah’s kind of a full on criminal starting off this season — hacking into government servers, doing whatever she can really to get information.

We know Amanda went with the Rowdy 3 at the end of last season, so where do we see her next?

HANNAH: Amanda really disowned Todd at the end of last season ‘cause she found out that her hero — her brother — was lying to her, her entire life. Not her entire life, but definitely at least last seven years. and that makes Amanda appear like she’s going to die now and she’s not going to survive. So she takes up with the Rowdy 3, which are a group of energy-vampires and becomes a total bad-ass and actually becomes the leader of the group.  So, in Season 2, she’s really the exact opposite of what she was in Season 1, which was a girl that was agoraphobic and stuck in the house and now she’s like kicking ass more like Farah, but in a really subtle way.

What do you guys think of all the fan theories and stuff that everyone’s coming up with?

HANNAH:  All of the fans are so smart.  I wore green nail polish in honor of Amanda and someone pointed out a Comic-Con that I had the Amanda nails. It was so cool.

JADE:  Yeah, that’s great. Yeah, they’re kind of picking up on stuff that we’re taping now, like they see little things here and there.

In Season 1m it was kind of surprising how kick-ass and empowering the show is for female characters.

HANNAH:  Yeah, I think the women are stronger than the men in the show.

JADE:  They are, actually.

Were you kind of surprised that the show went that way?

JADE: You know, it’s so funny because when I read it, when I first auditioned for the part like, it said it in the breakdown and I was like, “Well there’s no way I can do it. I’m not even going bother to read for it.” And then, when I got it … I mean, they saw what I look like, they know that I’m not this like huge person that can take down someone.  So they’re probably going modify it for me. Nope!  Kicking ass on the first day. First day!

HANNAH:  TV shows cast skinny women to do that.

JADE:  Yeah, and that was it. My first day on the set was that big old fight scene in three different floors with like ten different guys and that continued for the entire season and it also continues in Season 2 and you can see a lot of that happening

To see how these kick-ass ladies will continue to save their friends from all sorts of unknown terrors, be sure to tune in for the Season 2 premiere of DIRK GENTLY HOLISTIC DETECTIVE AGENCY on Saturday, October 14th at 9:00 p.m. on BBC America.