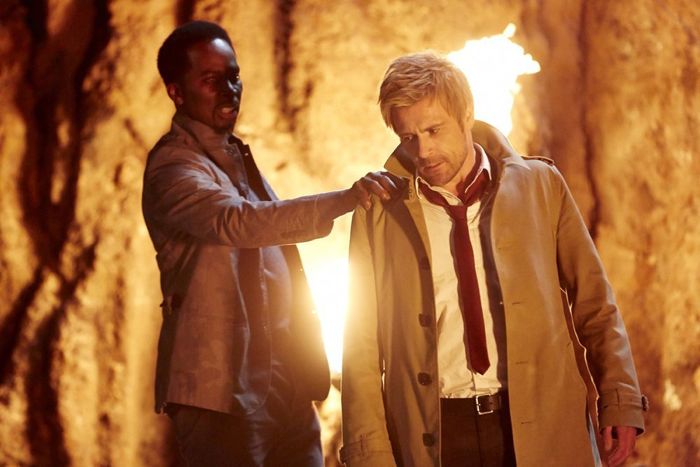 FOX has Gotham, ABC has Marvel’s Agents of S.H.I.E.L.D. and Agent Carter, the CW has Arrow and The Flash, and now NBC has CONSTANTINE. It’s getting very crowded for superheroes on the television airwaves. And those are just the ones directly based on the comic books, as Sleepy Hollow, Grimm, and others could be considered in this genre, too. How does the latest, inspired by a DC character spun off of Swamp Thing twenty-some years ago under the comic title Hellblazer, stack up with its competition?

Well, for starters, CONSTANTINE has a different tone than most of its peers. While other DC series have gone to dark places after the success of Christopher Nolan’s Batman films, CONSTANTINE is a horror title, so it necessarily doesn’t have a lot of fun in its DNA. The world is shadowy and washed out, and the titular character and his friends, what few of them he has, all struggle with their inner demons as much as the literal ones invading the world.

John Constantine (Matt Ryan, Criminal Minds: Suspect Behavior, Layer Cake) begins the series in an institution. Once mired in the supernatural world, he has distanced himself from all that junk and tried to clean up his life. We soon learn this is because he feels responsible for something that happened to a little girl awhile back, but whatever his reasons are, he’s out of the business and working on bettering himself.

However, just because Constantine is done with demons and such doesn’t mean they are done with him. After all, the show isn’t called Demon Hunter Rehab. So Constantine is forced out of hiding when a threat comes to town that requires his unique skill set. Will he continue to resist, or step up and be the hero that the world needs him to be? Take a wild guess.

Constantine isn’t alone, of course. An angel named Manny (Harold Perrineau, Lost, Sons of Anarchy) is assigned to watch over him, much as Constantine is given the task of protecting Liv (Lucy Griffiths, True Blood), a young woman whose father he knew. Constantine’s best bud, Chas (Charles Halford, True Detective), lends a hand and a taxi, and while not a main character, a reluctant Ritchie Simpson (Jeremy Davies, Lost, Justified) is roped into joining the gang, at least temporarily.

What unfolds is not a standard procedural tale, but rather, an involved narrative that is both scary and dire. I could compare CONSTANTINE to shows like Grimm, Hannibal, Dominion, Arrow, Gotham, and more because it borrows from all of those in tone and style, though isn’t a carbon copy of any of them, either. CONSTANTINE stakes out its own piece of the landscape, and it does manage to feel somewhat unique.

I can’t say it’s among my favorite programs, though, at least not from the pilot alone. It’s not that the pacing is slow, because a lot happens, but I still felt my attention wandering. It’s a bit boring, perhaps because it puts bringing the fright ahead of making one care about the characters, even as it doesn’t commit fully to an action piece. It’s pretty consistent and decently enough made, but just doesn’t grab me the way others have. And it won’t help DC unseat Marvel as Comic-to-Screen King anytime soon.

I will say, CONSTANTINE isn’t really predictable. One of the characters mentioned in this review (not Simpson) isn’t sticking around, at least not full-time. They are neatly written out of the story, kind of making them feel like they’re in a case-of-the-week guest star situation, but with a role that is developed more than most, as if intended to be a main character, then dropped. There is a replacement coming to the story soon, which may change my overall opinion of the show, depending on how the dynamic could shift. So the jury remains out, for now.