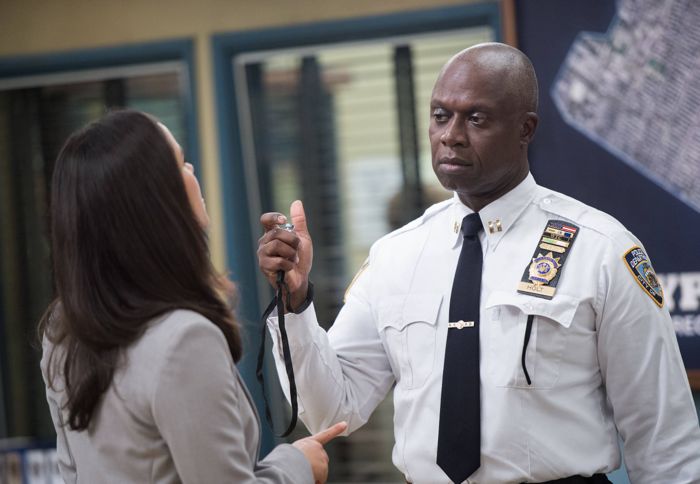 Last season, Fox’s comedy series BROOKLYN NINE-NINE broke out as one of the year’s top comedy series, winning Golden Globe awards for Best Comedy and another for star Andy Samberg.  It also scored an Emmy nomination for star Andre Braugher for his finely-tuned performance as Captain Raymond Holt.

In a recent press conference call, Andre Braugher talked about the fun of working on the show and provided scoop on a few special guest-stars that will be appearing in Season 2 of BROOKLYN NINE-NINE.

What initially drew you to play Captain Ray Holt?
ANDRE:  I think it was the reputation of Mike Schur and Dan Goor.  I am a fan of PARKS AND REC and I saw over the seasons they created, in my mind, an ever-expanding world of loveable goofballs and they were quite adept at creating a mature kind of interesting comedy.  I said to myself I felt like I would be in good hands playing this character with these guys at the helm.  That was one of the main considerations, as was the opportunity to work with Andy.

What are you most excited about in this upcoming season of BROOKLYN NINE-NINE?  Any particular storyline?
ANDRE: I don’t have a lot of information about because they pretty much keep that under wraps in order to give themselves the freedom to develop the story ines as they see fit, but I am excited about Kyra Sedgwick guest starring on the show.  We had a really great time.  She plays Deputy Chief Madeline Wuntch, an archrival and a nemesis of Captain Holt.  We did three or four episodes earlier this season and had a really great time.

What is the bone of contention between Holt and Kyra Sedgwick’s character? Is it a longstanding feud because they have a history together?
ANDRE: Well, it’s a longstanding feud.  It seems like they’re alter egos for each other.  They’re both a little committed to excellence to a high degree.  They’re both sort of intuitive detective types.  They’re both a little strange in their own way, a little robotic and quirky in that way.  There was an event way back in the past, back in 1989, you may not have been born back then, back in 1989, and that’s the genesis for their dispute, the bone of contention between the two of them.

With Kyra Sedgwick coming on to play your nemesis, and both of you having had such dramatic body of work in cop procedurals — her in THE CLOSER and you with HOMICIDE — what it was like for you two to play kind of these similar tropes, but in a very different comedic-sphere?
ANDRE: It’s a lot of fun.  The stakes are very high on dramas and we just have to enter into a whole imaginative world where the stakes are much more life threatening, much more serious, and I think we both appreciate being able to, in our own ways, have fun with the cop world that we created.  We invested a lot of time in creating credible roles in these police dramas, but it’s also fun for both of us to get a chance to let our hair down, so to speak, to play these roles.   I found it to be light and refreshing and Kyra is a very accomplished comedian and so it was a lot of fun working with her and the material is terrific.  I enjoyed it immensely and I’m looking forward to Kyra’s return sometime in the future.

Do you think we’ll get to see more into the background, the personal lives of any characters to sort of expand their depth this season?
ANDRE:  I would only be speculating about that.  It’s really a question for the creators, Mike and Dan.  I’m sure they’re going to continue to expand this universe.  We see certain characters again and again, like Patton Oswalt and Fred Armisen, as parts of this BROOKLYN universe.  I’m hoping that we’ll get a chance to see more of Kyra Sedgwick because she’s in the police hierarchy.  Eva Longoria was with us for a little bit.  We are opening up and expanding the personal lives, especially of Santiago and Peralta.    I’m sure we’ll see more of him.  I couldn’t tell you exactly when it’s going to happen or how it’s going to happen, but I’m sure we will because it’s part of the master plan for BROOKLYN NINE-NINE to really create, I think, a full and complex universe for all of these characters, but in terms of particulars, there’s nothing I can share.

Now that Peralta has been with the FBI and is going to presumably join the Nine-Nine again, is there is anything that you can tease about how that dynamic might shift between Holt and Peralta as he rejoins the precinct?
ANDRE: I think it shifts slightly.  I will say that Holt is a man who embraces change.  As stoic as he seems, as conservative as he seems, he is a man who is interested in embracing change.  With a new police commissioner and the return of my ace detective, Peralta, I feel as though the entire precinct is poised to get better, to leave the world of sleepy, underperforming Brooklyn precinct and really become something special.  That’s what I see in the scripts to date and that’s what has been pitched to me in terms of what’s going to happen with Holt and the precinct in the future.  I don’t have any information about any episodes past the eight that we have done, but I will say that Holt is embracing the change that’s overcoming the entire department.

Dan Goor said that Marc Evan Jackson was back and had already shot an episode.  Can you say anything about what we’ll see in that episode?
ANDRE: He’s seen briefly in that episode.  It’s mostly about Peralta sort of invading my house with one case in particular and then we solve it in an all-night brainstorming session.  We solve the case at my house, but it’s a small role.  I think we’re going to see Marc in more detail later in the season, but he has shot one episode, but it wouldn’t be a large storyboard.

Are there any major changes that you can tell us about, either behind the scenes or with the cast this year?
ANDRE: With the cast, we really get along and the show was cast for sanity, so it’s running very smoothly.  In terms of what’s happening with the cast in terms of their story lines, that’s really a question for the creators, but I will say that we have a good time on the set.  We work very well together.  The material is fantastic this season, so we’re all very pleased.

What has been your favorite part of filming the show?
ANDRE:  I enjoyed the episodes a lot outside the precinct where we go on our adventures and such.  I’ve enjoyed our Thanksgiving and Christmas episodes.  I’ve enjoyed “The Party” particular.  “The Party” was really an opportunity to see everyone in a really drastically different atmosphere than the bullpen and I just found it to be a lot of fun.  It was a great script and a lot of fun to film.  In retrospect, “The Party” maybe it was Episode 16, I can’t remember, but towards the end of the season, I thought that was my favorite episode.

What it’s like to play Holt, the stoic man, opposite Jake (Andy Samberg), who just cracks everyone else up in the precinct?
ANDRE: I think it’s difficult to say the least.  He’s a very funny guy and a lot of great off the cuff humor.  I’ve sort of committed myself to perfecting the art of the straight man, so I’m trying very hard to not crack up.  We’ve done eight episodes this year.  I’ve cracked up twice.  I’m off my pace from last year, which was 3 crack ups in 22 episodes.  Obviously, Andy’s getting funnier and I’m relaxing a little bit on the show, but I’ve decided to commit myself to really perfecting the art of the straight man.  I’m getting better at it and I have a great cast of comedians.  Between Chelsea and Andy and Joe and Terry, it’s really a funny cast and we have a great time doing it.   When we get a chance to improv, we go at it wholeheartedly.  I pretty much stick to the script because that’s my job, but they really take off and I consider them all to be my kites and I am their string and so I just give them a great opportunity to fly and I guess I hold them to the earth to help tell the story, but we’re having a really great time this season.

You talked last season about the opportunity that BROOKLYN NINE-NINE gave you to study and learn from some really experienced and talented comedians.  As you enter now Season 2 with a successful season behind you, has the atmosphere or approach changed at all on the set?
ANDRE: No.  I think they’ve developed a good way of working on the set and it was put into operation last year and we’re continuing with that.  We, as a cast, as we get to know each other better, we’re working faster and more efficiently, which actually gives us more time really to play around.  In any given scene, we’re going to do five or six takes of the material that’s scripted and really cover that thoroughly and then we have enough time to do what we call “fun runs” and fun runs is where everyone pulls the craziest stuff they know out of a bag and throws it into the scene.  Fun runs are unpredictable, but they really breathe a lot of life into the process of creating the comedy and it keeps it loose.   I’m having a great time.  I’m studying these guys like a hawk.  There are a lot of great young comedians on the show and it’s giving me a real thorough education on another aspect of my art form and I’m having a great time.  I’m learning a lot and I feel reinvigorated by being on the show.

Are there ways that your body of dramatic work that you’re able to draw on that or does that influence it?
ANDRE: I’m a serious guy.  I guess I make my serious faces, my serious stares and such.  Acting is the same in a certain way on comedies as well on dramas.  It just has a different sort of lift, kind of a different spiritual dimension.  The same sort of hard work and dedication and concentration goes into acting in comedies for me in comedy as well as drama.  I find myself working in a similar way, but the effect is just much lighter.  It’s a real crazy comedy.  It’s a goofball comedy.  The effect is much, much lighter, but I find myself drawing on the same techniques that I would use if I were doing a drama.

Be sure to tune in for all new episodes of BROOKLYN NINE-NINE air Sunday nights at 8:30 p.m. on Fox.