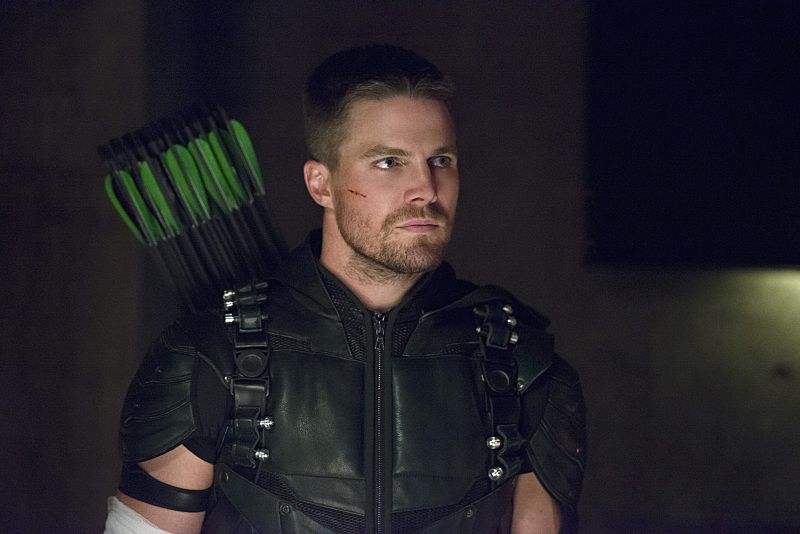 Team ARROW is in need of a “Restoration,” and they get one in this week’s installment on the CW. Felicity (Emily Bett Rickards) tries to bring Oliver (Stephen Amell) and Diggle (David Ramsey) back together. A new villain might just help her along, though also exposes her secret to yet another person. Meanwhile, Thea’s (Willa Holland) quest for help and Laurel’s (Katie Cassidy) mission to bring her sister back to life don’t go as either of them expected.

Team Arrow expands rapidly over the years. While it starts as just three people, several others are let in on the secrets as time goes on. It’s gotten to the point where it seems like just about anyone can find the lair and figure out who is on the team.

Take Curtis Holt (Echo Kellum). Just introduced as an employee of Felicity’s, he already gets into the headquarters and learns that Felicity is connected to Star City’s costumed vigilante. Now, Curtis’ discovery is due to mistakes that Felicity makes, so he can’t really be blamed. But it still seems like everyone important finds out sooner or later, usually sooner. I suppose this means Curtis will be sticking around, at least for a little while, which in his case is welcome news.

I like the separate life “Restoration” shows us for Felicity. As ARROW has gone on, her character has gotten more and more development. Seeing her as a CEO with her own activities apart from the others is gratifying. I was beginning to wonder how she balances everything, but with a base just downstairs from her job, a busy boyfriend, and being more than capable of herself, any lingering doubts are laid to rest as we see her in action this week. Though, it might get harder, depending on where the new command center will be.

Felicity even manages to survive an encounter with the metahuman villain Double Down (JR Bourne, Teen Wolf)! Now, it’s only by accident that she makes it out alive, but still, her life has become colorful, indeed!

Oliver and Diggle have a rather tame time by comparison. It does feel a little too easy, the way they come back together when Oliver almost literally takes a bullet for Diggle, but it’s needed. The tension between them has gone on long enough, and ARROW needs to move on. “Restoration” gets a little hokey in doing so; connecting Diggle’s query, Mina Fayad (Carmen Moore, Blackstone), to Oliver’s foe, Damien Darhk (Neal McDonough), seems way too convenient. But at least “Restoration” dispels with the drama and gets the show back to where it needs to be.

One thing ARROW is doing better and better these days is balancing characters. In the Laurel / Thea plot, the two travel to Nanda Parbat in order to seek a cure for Thea’s bloodlust and bring Sara (Caity Lotz) back to life. In Nanda Parbat, the two girls have their own very personal motivations, which somewhat clash with Ra’s (John Barrowman) and Nyssa (Katrina Law). Yet, all four intermingle their through lines nicely, combining events where they need be, but still making all feel authentic to who they are. It’s a delicate dance that is handled more deftly than some of ARROW’s other interweaving threads, such as Diggle and Oliver’s part of “Restoration.”

Ra’s brings Sara back to life not for Sara nor Laurel’s sake, but for Thea’s. He genuinely is trying to be a good dad and help her. Giving her prey to kill doesn’t work, so maybe bringing a friend back will. I don’t admire Ra’s method of assistance, but one has to admit that he is definitely devoted to his daughter and past the point of just using her.

Now that Sara’s back, all sorts of possibilities are on the table for the former Black Canary. Obviously, Thea’s bloodlust is just a taste of what Sara will go through. But we know Sara is destined for the mid-season spin-off, so her recovery time is finite. I’m not sure where ARROW will take her over the next couple of months, but I’m anxious to see and happy to have her back.

ARROW isn’t a perfect show, and some parts of “Restoration” don’t quite make sense (not to mention the nearly useless flashbacks). Yet, overall it’s fun to watch, and it does a good job keeping the audience engaged. The longer it goes on, the smarter the writing seems to get, and I greatly appreciate that.