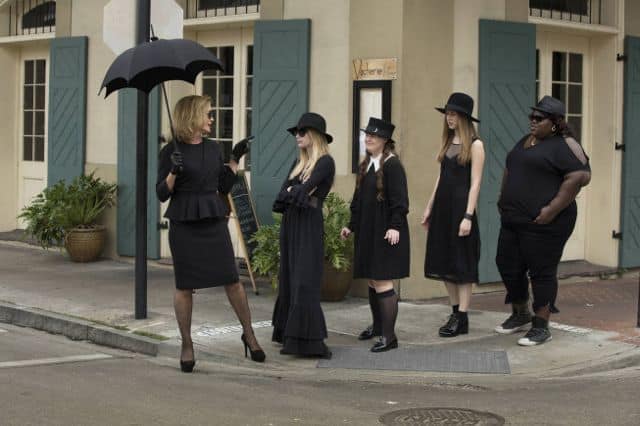 FX’s AMERICAN HORROR STORY begins its third outing this week. Subtitled COVEN, this year’s story is about witches. There is a school in New Orleans where young girls with special powers can be sent for training. With the reputation and wide-spread knowledge about the facility, and the existence of magic in general, slipping away, senior witches have differing opinions on what direction in which to take their kind in the modern age.

There are many different, distinct stories introduced in the first episode, “Bitchcraft.” The first is that of Madame Delphine LaLaurie (Kathy Bates, Harry’s Law), a cruel mistress who lived hundreds of years ago. She has a collection of tortured souls in her attic, and will not hesitate to punish, even for things that are not her victim’s fault. She is one scary person. She is also obsessed with youth, a quality that not only applies to her in this cast.

Bates is fantastic, as one might expect, creating a character both chilling behind closed doors, and refined and polite in public. She builds the layers of the part carefully, smoldering anger and power below the surface, and definitely grabbing viewer attention every second she is on screen. It is not clear how she will fit into the larger tale, as the connections are not drawn until the end of the hour, but they are done in a clever and surprising way.

Besides Bates, fans of the anthology series will know right away to expect great things from Jessica Lange and Sarah Paulson, playing wealthy widow Fiona Goode and potion-making headmistress Cordelia Foxx, respectively. After all, they’ve shared scenes in past years, and have already developed interesting and memorable characters for the franchise. They appear poised to do the same again in AMERICAN HORROR STORY: COVEN.

Lange’s role this season seems to allow her to be more wild and free than we’ve seen her previously. This is a woman not only with confidence, as Sister Jude had, but with the ability to back it up, as neither of her other parts possessed. One can see just how much fun the actress is having, and that really adds to the enjoyment.

Paulson plays things closer to the vest, less brave than last year’s Lana. Yet, she still gets delicious drama with Lange, knowing as these writers do that the two play well off of one another, and using that to their advantage. As mother and daughter this time around, Fiona and Cordelia have a complicated history, and while we’ve seen the two performers at odds on screen before, this time seems different. It’ll be interesting to see how far this volume veers Lange and Paulson away from the previous.

We also have the girls at the school. The main protagonist seems to be Zoe (Taissa Farmiga, who was in season one), a girl who doesn’t understand her skills, and whom has accidentally killed. Sent by her grandmother, Myrtle Snow (Frances Conroy), to the school, Zoe has a lot to learn, but is also quick to figure things out. She’s a very strong presence, surprising for someone with so few screen credits. It’s certain she’ll hold her own.

Zoe’s classmates are Madison Montgomery (Emma Roberts, Nancy Drew), a famous movie star, Nan (Jamie Brewer), a clairvoyant, and Queenie (Gabourey Sidibe), a human voo-doo doll. While Queenie and Nan are not main characters, I do like the dynamic of the group as a whole, a twisted bunch of misfits, and so hope they recur often. The four girls already have a good chemistry, especially between Zoe and Madison, not necessarily a pleasant relationship, but an entertaining one.

AMERICAN HORROR STORY: COVEN is the year of the woman, with only two men, Evan Peters and Denis O’Hare, in the main cast. Besides those listed above, Angela Bassett (Betty and Coretta) makes quite an impression in her guest spot, and Lily Rabe delivers an impact in a small part that will surely expand in other installments, though it’s far from obvious how that will happen. With all of these wonderful females, I can’t imagine a better grouping for a witch story.

This season also proves to be more brutal than the first two, with some very graphic sex and violence, sometimes combined, in the first episode alone. Each season of AMERICAN HORROR STORY has its startling and cringe-worthy scenes, but to see so much, so early makes me think there is a lot more in store. It may not be particularly scary, at least not yet, but it certainly pushes the boundaries of the genre, as well as what can be seen on basic cable.

“Bitchcraft” impressed me a lot. My hopes were high, given the quality of earlier installments and the resumes of those who signed on for COVEN, but the shock factor still got to me, and Farmiga, in particular, showed something unexpected. If this episode is typical for what the year has in store, it may be the best season thus far.