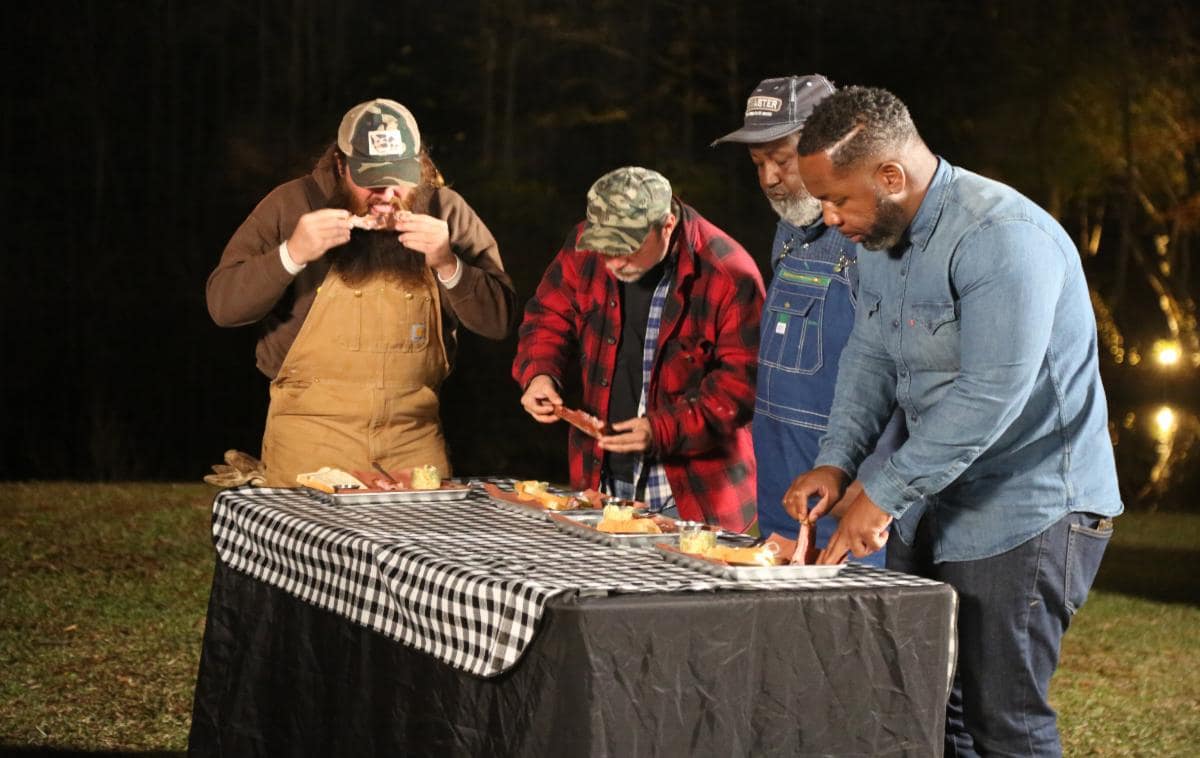 Deep in the backroads of the South exists an underground world of barbeque where pitmasters carry on the tradition of making the best barbecue in the country. Using just smoke, heat and lessons passed down through the generations, these masters of the pit rely only on their heritage, secret recipes and regional ingredients to make the most mouth-watering meat the country has to offer.

In an all new discovery+ series, MOONSHINERS: SMOKE RING, legendary Moonshiner, Stephen Ray Tickle along with “Hogfather” Tank Jackson, venture into the deep South in search of the best, often undiscovered, pit masters from around the country to compete in a high stakes battle to determine whose heritage and skills produce the best tasting meat. It’s man, meat and fire in its truest form — who will walk away King or Queen of the Smoke Ring?

On his road trip across the South, Tickle is joined by other local experts to seek out and reveal the best pit masters in the country. From the Carolina backroads where moonshine and barbeque share a common heritage, to the Appalachian mountains where tradition and family ties run deep, MOONSHINERS: SMOKE RING spotlights the underground world of barbeque and the tough, gritty pitmasters who are eager to prove they’ve got the best tasting smoked meat in the country.

With backgrounds that vary from multi-generational Carolina cooks and barbeque enthusiasts from Brooklyn, to the red dirt roads of Georgia, the SMOKE RING pit masters each bring a unique story to the to the world of barbeque as they use their special skill-set to compete for the title of SMOKE RING champion. Joined each week by guest judges who are legends in the barbecue world – including Sam Jones, Ed and Ryan Mitchell, Chris Lilly, Emily Han, and Carey Bringle aka Peg Leg Porker – Tickle is ready for this off-the-grill gourmet competition that puts the best barbeque on display and will leave mouths watering all across the country.

About discovery+discovery+ is the definitive non-fiction, real life subscription streaming service. discovery+ features a landmark partnership with Verizon that gives their customers with select plans up to 12 months of discovery+ on Verizon. discovery+ has the largest-ever content offering of any new streaming service at launch, featuring a wide range of exclusive, original series across popular, passion verticals in which Discovery brands have a strong leadership position, including lifestyle and relationships; home and food; true crime; paranormal; adventure and natural history; as well as science, tech and the environment, and a slate of high-quality documentaries. For more, visit discoveryplus.com or find it on a variety of platforms and devices, including ones from Amazon, Apple, Google, Microsoft, Roku and Samsung.

About Magilla EntertainmentFounded in 2009, Magilla Entertainment is one of the nation’s largest independently owned production companies in non-scripted TV. Magilla has enjoyed success from a diverse portfolio of over 45 separate and unique series including hit shows such as Discovery’s Moonshiners, Diesel Brothers, Dirty Mudder Truckers, Master Distillers TLC’s Long Island Medium and I Love a Mama’s Boy HGTV’s Beach and Lake Front Bargain Hunt franchises, as well as History Channel’s American Ripper, Mega Doc Cars That Built America and the one-hour documentary Rise Up: The Movement That Changed America as well as many others. For more information, visit www.magilla.tv.