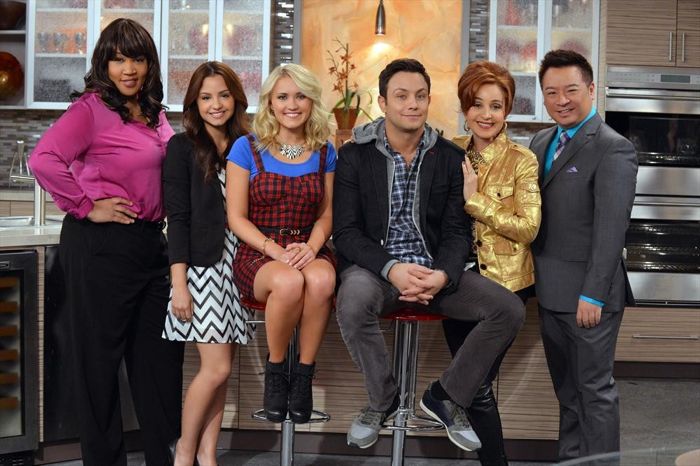 I don’t tend to watch the comedies (or many dramas) on ABC Family because they are full of stock characters and ‘classic,’ meaning tired, sitcom notions. I am slightly tempted by the new YOUNG & HUNGRY, though, because of the charm of the cast. It’s a light, frothy series that’s almost a remake of The Nanny, but with some great supporting players and a premise that will give it legs for at least a couple of seasons, even if the acting is a little over-the-top and the dialogue, at times, groan-inducing.

Emily Osment (Hannah Montana) stars as Gabi Diamond, a professional chef who is broke and having trouble finding work, much to the dismay of her roommate, Sofia (Aimee Carrero, Level Up). Then, Gabi interviews for a position as the personal cook of rich techie Josh Kaminski (Jonathan Sadowski, $#*! My Dad Says). It’s a dream job, and Gabi might just be on the road to comfort, until she screws it up by coming between Josh and his girlfriend, Caroline (Malory Jansen, Baby Daddy). Now, Gabi must stay in an uncomfortable position or risk not having the money she needs to buy groceries and pay rent.

Gabi herself is not a great character. Exhibiting the heightened emotional reactions Osment likely picked up from a certain former co-star, her character makes bad choices and isn’t good at dealing with awkward situations. But it’s her “aw, shucks” attitude and blatant innocence that keep her from being absolutely ridiculous. And her education and talents pull her away from the dumb blonde stereotype that would ruin her completely, Osment pulling off making Gabi seem competent, at least in the kitchen.

More enticing, though, are Rex Lee (Entourage, Suburgatory) and Kym Whitley (Rango, We Bought a Zoo) as Elliot and Yolanda, Josh’s other staff. Elliot is a yes-man butt-kisser who takes an immediate dislike to Gabi, mostly because she stands in the way of him hiring a gorgeous winner of Top Chef. Yolanda is sassy and smart in a very attractive style. They are my favorite parts of this pilot.

Elliot and Yolanda are nothing new, stock characters of the type I mentioned with distaste in the first sentence of this review. The thing is, though, Lee and Whitley are terrific entertainers. They know just how to deliver a line or milk a scene to make it land with humor and authenticity. Even if they never rise above predictability and superficial personalities, they are still enjoyable to watch, far more interesting than Josh or Gabi.

Now, the set up will grow stale after a season or two, with the tension between Josh and Gabi begging for some sort of balancing out sooner rather than later. Gabi can’t stay hungry, as the title indicates, for long. But that’s a problem for down the road, and I’m sure the writers will find a less-than-clever way to solve it, a la Melissa and Joey getting together.

YOUNG & HUNGRY will fit in well on ABC Family. It’s not too emotionally deep and it’s pretty tame in scope and material. There may just a tad too much sex to really call it ‘family’ fare, but most of its peers contain the same, and what sexuality is exhibited is highly sanitized for the modern era. It chooses easy laughs over growth and development, and establishes a sensibility that one would find on the broadcast networks in the 1990s.

What this means it that YOUNG & HUNGRY won’t be any serious TV viewer’s favorite show. However, like a candy bar, it can be delicious in the moment, even if it does you no favors in the long-term. It’s a good mix of nuts and sweetness, a bit soft in the center, but still tasty, even if it’s not gourmet. This puts it several notches better than its peers like Baby Daddy and Melissa & Joey, and miles above its weekly pairing, Mystery Girls.