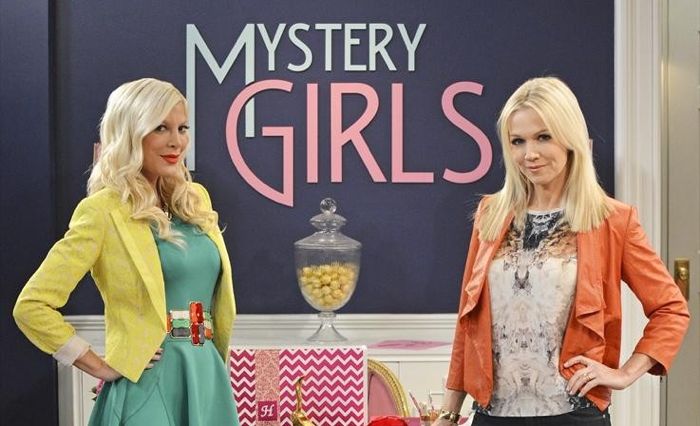 ABC Family’s MYSTERY GIRLS is the story of two former actresses, Charlie (Jennie Garth, 90210) and Holly (Tori Spelling, A Carol Christmas), who form their own detective agency. See, they used to star in a series called Mystery Girls, and when a witness to a crime demands that he’ll speak only with them, being a fan of their show, they get the idea to apply what they learned making TV to the real world, starting a private detective agency. Get it?

This is pretty much one of the cheesiest, most horrible concepts for a television show ever. In no way does playing a detective on television prepare one to do so in actual life. One job involves reading scripts of visually entertaining cases and clever twists. The other is hours of observation and critical thinking skills. They involve two completely different sets of talents, and while going undercover might benefit from the ability to fake things, because Holly and Charlie are famous, it would be pretty hard for them to disguise themselves.

Setting aside a completely unrealistic and dumb premise, MYSTERY GIRLS is still pretty bad. The characters are two-dimensional, unlikeable, and uninspired. The antics are goofy, and not in a good way. The writing is trite and inauthentic. The set up doesn’t even work on the way the individuals are built into the structure. It’s a failure, all around.

Where MYSTERY GIRLS might find an audience is among the fans of the long-running drama Beverly Hills, 90210. Garth and Spelling are both alumni of that work, and they make sure to include references, such as name-dropping Shannen Doherty, in the pilot. For viewers nostalgic for the teen drama, some may be willing to sit through even this schlock for a reunion of two of the main characters.

I doubt they will be satisfied, though. MYSTERY GIRLS isn’t just bad, it misuses both of the actresses. Spelling has a natural abrasiveness that some find hard to get past, so rather than softening her, they make her character virtually crazy. It’s hard to sympathize with someone who does herself absolutely no favors and is completely self-absorbed. Garth, meanwhile, is charming and good-looking, so they make her a tired, slightly frumpy housewife, almost as if they are trying to hide her best qualities. These observations may be a bit harsh and superficial, but are meant to illustrate how the program can’t even use what strengths it does have to its advantage.

The third main player, Nick (Miguel Pinzon, A New York Love Story), is even worse. A lonely, young, gay man, Nick finds escape from his life in DVDs of the show within a show, becoming a huge fan of Holly and Charlie. He is so ridiculous, though, that he tells an actual police officer (Ryan McPartlin, Chuck) that he has to give his statement to TV personalities. Who in their right mind who possibly do that, and what law enforcement official would go along with it?

I have to admit that it does make sense for Holly to hire Nick, though. He feeds into her ego, which is starving for attention, so of course she likes him. Though it doesn’t quite make much sense that Nick insists on having Charlie present for his statement, too, then ends up ignoring her later in the episode, having turned against her completely. Even if he doesn’t like her personality as much as Holly’s, his hero worship of Charlie should carry over for a little longer.

MYSTERY GIRLS is lucky it’s on ABC Family because, for the most part, that network makes low-quality series that are fine for their target audience, even if they aren’t good enough to make it anywhere else. This series may just fit in with that brand, though it will be one of the lesser entries on the network.