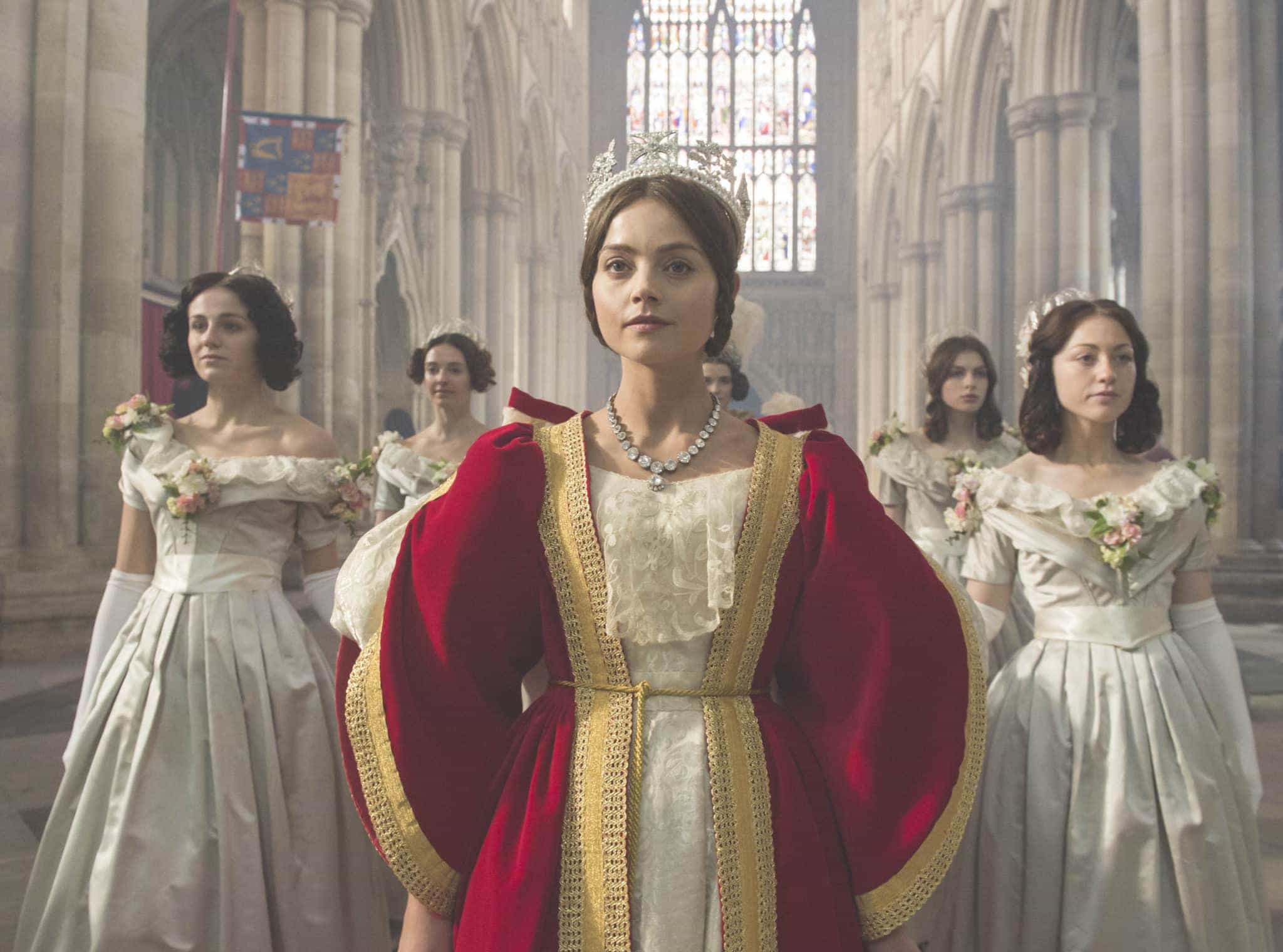 PBS’ Masterpiece presents a new drama this week called VICTORIA. Centered around the long-reining British queen of that name, the show originally aired in the UK, and is now coming to the states, the first two hours premiering this Sunday. The initial offering deals with Victoria taking the throne, befriending the prime minister, and her struggles between what she wants personally and what the politics of the country demand.

Although not a fan of Jenna Coleman’s Clara in the series Doctor Who, I do like her better as Victoria. She does a fine job portraying the young, short queen (only eighteen when she took the throne, and under five feet tall) as she comes into her own.

Victoria has a very sheltered childhood, controlled as she is by her mother (Catherine Flemming, Simones Labryinth) and her mother’s close pal, Sir John Conroy (Paul Rhys, Da Vinci’s Demons). When she gets that first taste of being in charge, it goes to her a head a little bit. Coleman keeps her sympathetic through those bits, helping us understand why Victoria makes the decisions she does, and rationalizing the more selfish ones.

I also like Rufus Sewell (The Man in the High Castle) as Lord Melbourne. He and Victoria had a special relationship, and while the way it is shown in VICTORIA isn’t wholly accurate, I like this chemistry, too. It avoids being romantic, which is certainly a good thing, but I do get that Melbourne really cares for her, and that’s important as Victoria transitions into power.

Other than that, though, this series, while interesting, isn’t overly compelling. Some of what is portrayed is relatively factual, historically speaking, but other parts are dramatized to try to add more excitement. This seems unnecessary, and feels forced, especially in making Melbourne so attractive. What happens with Victoria’s birthday cake is a good example of something that didn’t need added in, as is the scheming of relations behind her back. The show could have focused more on the real things, such as the possible scandal with Sir John, which is gotten through pretty quickly, rather than adding excess drama.

I would point to The Crown on Netflix as an example of how to do things better. It doesn’t help VICTORIA that its U.S. release comes just after The Crown has gained steam and awards. (It hadn’t yet premiered when VICTORIA aired across the pond.) The Crown keeps things more grounded, less episodic, and that makes it stronger overall. VICTORIA should take note of that as it develops season two, changing course to feel more like a docudrama and less like a soap. I doubt it will, but that would be the smart move.

The other comparison VICTORIA is sure to rate is to Downton Abbey, mainly because there are plenty of scenes for the servants, including the queen’s German baroness, Lehzen (Daniela Holtz, Phoenix), Mrs. Jenkins (Eve Myles, Torchwood), and the young Skerrett (Nell Hudson, Outlander). I feel like this is a bit of an odd choice because the household of a queen would have a LOT more servants than Downton Abbey, and yet it doesn’t feel like it does because VICTORIA focuses on such a small group. Which again, takes me a bit out of the story, and feels like an odd choice for a show about the queen herself.

Neither comparison, to Downton Abbey or to The Crown, leave VICTORIA the better for it. Taken on its own, I found it entertaining and beautifully produced. By comparison to its peers, it feels trite and superficial, as well as more soapy than it should be. For that reason, I can’t see continuing to watch it, even though it has been renewed for a second series overseas.