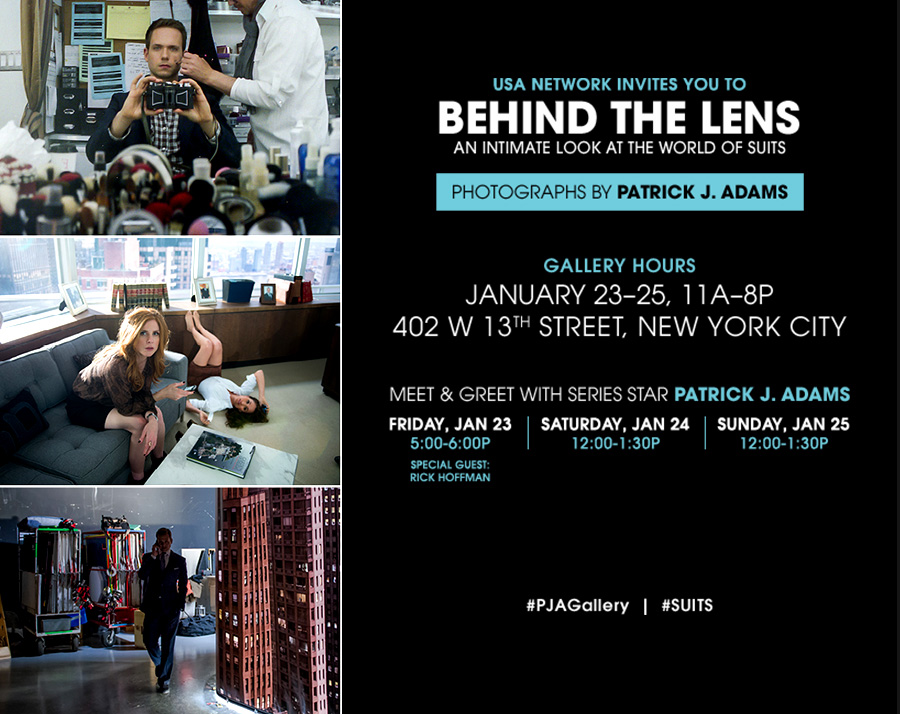 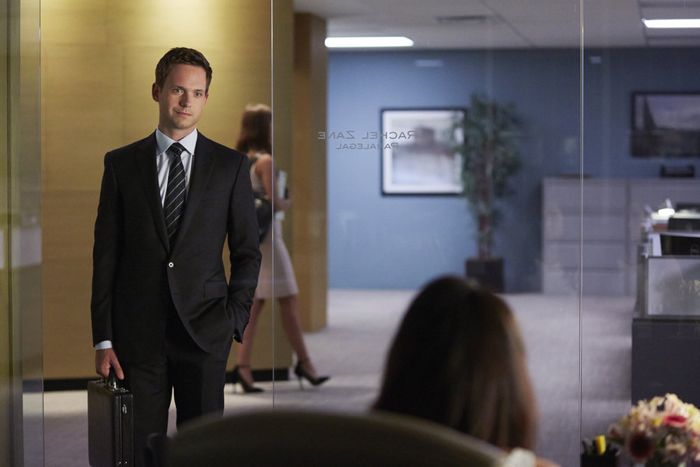 USA Network today announced “Behind The Lens: An Intimate Look at the World of SUITS,” a photography exhibit in New York, featuring rare and candid behind-the-scenes photos of the series cast and crew by star Patrick J. Adams.  A selection of photos will be sold through Charitybuzz.com and benefit Pablove Shutterbugs, a program of The Pablove Foundation that teaches the art of photography to pediatric cancer patients.  The gallery, located at 402 West 13th Street, will be open to the public from Friday, January 23-Sunday, January 25 from 11a-8pm. Throughout the course of the weekend, Adams will hold daily meet and greets with fans.

Adams is well known as the brilliant but not-quite-legal associate Mike Ross on SUITS, a role for which he was nominated for a Screen Actors Guild Award.  Adams has actively been sharing set life with SUITS fans since the beginning of production through his Instagram account.  Over the course of more than 60 episodes, using an assortment of both vintage and state-of-the-art cameras, he has amassed a collection of professional quality photos that capture what goes on when the TV cameras are not rolling.

“These are not just photographs of the incredible cast of the show, but also our steadfast crew, designers, directors and writers whose phenomenal work shapes every moment in front of the camera while they, until now, have remained behind it,” said Adams.  “My years of working on SUITS afforded me the opportunity to focus, learn and evolve as a photographer, while at the same time enjoying the rare gift of being a part of a hit television series that I am proud to call home.  I remain humble and grateful for every single moment of it.”

The gallery will also feature a selection of photographs taken by the children enrolled in the Pablove Shutterbugs program.  For more information, please visit http://www.pablove.org/shutterbugs/.

Fans can visit the official SUITS Facebook, Twitter (@Suits_USA) and Instagram (@Suits_USA) accounts to preview some stunning images within the collection and cast their vote on social media to win a signed copy of the fan favorite photo.  Join the conversation on Instagram and Twitter using the hashtag #PJAGallery.  Visit usanetwork.com/suits to learn more about the event, the gallery hours and Adams’ appearance times.

SUITS returns with the continuation of the dramatic fourth season on Wednesday, January 28, marking the directorial debut of star Gabriel Macht, with Adams going behind the lens for his directorial debut later this season.  Picking up moments after the stunning cliffhanger, Louis (Rick Hoffman) has gained the leverage needed to finally achieve his ultimate goal— becoming a name partner of the firm. Meanwhile, the team at Pearson Specter is dealing with the major fallout of Louis learning Mike’s (SAG® Award nominee Patrick J. Adams) secret. In the final six episodes of the season, Harvey (Gabriel Macht) and Jessica (Gina Torres) are faced with managing critical changes at the firm and defending one of their own. The series also stars Sarah Rafferty and Meghan Markle. Guest appearances this season include “Pretty Little Liars” star Troian Bellisario, Billy Miller (“The Young and the Restless”) and Tricia Helfer (“Battlestar Galactica”), as well as the return of Stephen Macht, Wendell Pierce, Neal McDonough, Eric Roberts and Zeljko Ivanek.