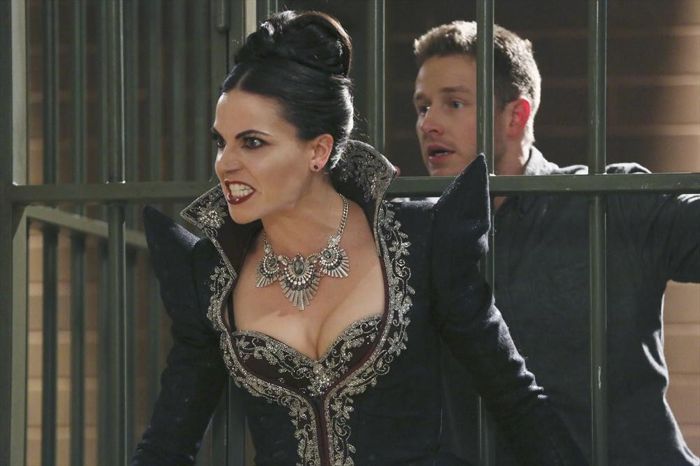 Last night’s installment, “Shattered Sight,” may be my favorite this fall for ABC’s ONCE UPON A TIME. Ingrid The Snow Queen’s (Elizabeth Mitchell) spell falls over Storybrooke, making practically everyone turn against one another. Ribbons prevent Emma (Jennifer Morrison) and Elsa (Georgina Haig) from fighting Ingrid directly, bound as they are to her by the love injected in the material, so they seek out Regina (Lana Parrilla) to break the enchantment with her pure hate. But the real key to everything may be missing memories, some of which are shown via flashback.

Ingrid’s arc has been a moving one. She loves her sisters dearly, and the tragedy that befalls her at a young-ish age is an understandable reason why she turns cold. Her sole mission is to regain the love she’s lost, casting Elsa and Emma in the role of her sisters. Ingrid does not act out of cruelty, and while she doesn’t care if others get hurt, being selfish and narrow-sighted, she only casts the “Shattered Sight” spell to get to her end goal.

Which is why her heroic self-sacrifice is tragic. It doesn’t make up for everything she has done, but had she lived longer, I’m sure she would have worked to do so. The scenes we see of her with a young Emma (Abby Ross) prove that she does care about some people. Sure, the found-letter from Ingrid’s long dead sister proclaiming that she still loved Ingrid and regretted what she did to her is a little convenient, but it makes sense for a fairy tale, which is what this is. That does not cheapen Ingrid’s end, though, a bittersweet conclusion for a mostly-excellent arc.

It’s also a little too easy for Elsa and Emma to get Regina to break the ribbon bond. That was the result of something Ingrid spent decades planning, and Regina can make it go away in a second, accidentally? Then Elsa and Emma run from Regina, who is fully reverted back into Evil Queen, and manage to get away from her? And they’re not even worried about what unleashing the Evil Queen into the town will do?

That being said, Elsa and Emma are busy, so maybe they decide that letting evil Regina out is a risk they have to take. Plus, Regina goes to the jail, which leads to an awesome fight scene between her and Snow (Ginnifer Goodwin), so it’s hard to complain too much. In fact, the whole sequence with Snow, Charming (Josh Dallas), and Regina, ending in an uncomfortable laugh as the three try to process the emotional toll of what they just went through, is terrific. It’s some of the best work Goodwin has done in the series, and as much as I adore redemption-path-Regina, it’s fun to see her as the Evil Queen once more. Regina is my favorite character on ONCE UPON A TIME, and “Shattered Sight” affords Parrilla another opportunity to play her brilliantly.

One character nearly absent from “Shattered Sight” is Rumple (Robert Carlyle), and that could very well be why the hour is so good. Rumple arguably has the best plot in the show from its inception up through the middle of last year. Since then, all his development has been tossed out and he’s been ruined worse than just about any character on television I can think of. His story line this fall has been abysmal, completely out of the established persona, and while Carlyle remains a fine actor, Rumple has been an anchor weighing ONCE UPON A TIME down lately.

Unfortunately, the conclusion of this episode means that Rumple’s “scheme” hasn’t come to fruition, so my guess is that he will be front and center next week. Assuming the writers stay consistent with what they’ve done with Rumple recently, ignoring the previous version of him, he’s bent on power and getting his family away from Storybrooke. I just can’t bring myself to look forward to that, still sad about what’s been lost here.

Because Rumple isn’t important in “Shattered Sight,” though, with the focus on Ingrid, who is mostly well developed, and the episode contrains some emotional and fun scenes, with a great battle and an exciting climax, it works very well. I kind of wish it were the fall finale so ONCE UPON A TIME could go out on a high note, but even though it isn’t, that doesn’t take away from a heck of a memorable hour.

ONCE UPON A TIME concludes this run next Sunday at 8 p.m. ET on ABC.

ONCE UPON A TIME Recap Season 4 Episode 10 Shattered Sight