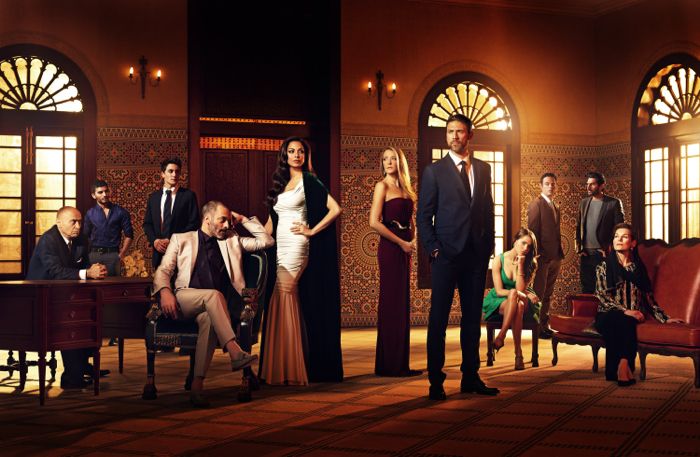 FX, which has been very successful in making quality television programs these past few years, does it again with TYRANT, premiering this week. Set in the fictional Middle Eastern country of Abbudin, the story is one of a dictator’s family in a country trying to modernize, and whose people want to be free. The son who has rejected his homeland and spent the past twenty years living in America is forced to return and rule when circumstances incapacitate those who should be running Abbudin.

The lead character in TYRANT is Bassam “Barry” Al Fayeed (Adam Rayner, Hawtorne). He is a closed-off doctor and family man who has tried to escape his past. He only reluctantly agrees to go home for a brief visit after a long absence, and is determined not to be dragged in to the politics there, which he follows from afar. His friend, Fauzi (Fares Fares, Zero Dark Thirty), an opposition journalist, and Barry’s family really want him to contribute. Can Barry be persuaded to help the two sides come to an understanding?

This is a very delicate time for Abbudin. Barry’s father, Khaled (Nasser Faris, House of Sand and Fog), doesn’t understand why the people want to be out from under him, thinking he has given them prosperity and peace. Watching his fellow dictators fall, Khaled tries to find a way to hold onto his power. He quickly realizes that his elder son, Jamal (Ashraf Barhom, The Kingdom), is too brutal and dispassionate to appease the population, and so hopes younger child Barry can help with that.

TYRANT is very interesting in making us see the perspective of the ruler. Khaled is shown to be ruthless in flashbacks, but seems a just leader now. Does he have a point in his views? And clearly, having the wisdom to work on bringing Barry into the fold, he’s trying to do right by his people. If he simply wanted revenge he could bomb them, which he’s not doing, and it he was solely worried about his own life, he could take some wealth and flee, again another option not considered.

Viewers are asked to see Barry as a reluctant captain, someone people can follow because he’s worthy of such loyalty, but made all the more eligible by his derision for the position. He is a normal guy and wants to stay that way. He has abandoned the trappings and riches he is entitled to by birth, and so should be the type of president the masses would fall in line for.

Barry is further grounded by his American family. Wife, Molly (Jennifer Finnigan, Better With You, Close to Home), is compassionate and understanding, though she’s getting tired of Barry refusing to talk about his past. His daughter, Emma (Anne Winters, The Fosters), is a perceptive daddy’s girl. His son, Sammy (Noah Silver), is a typical rebellious teen, and somewhat-secretly gay, which will be a problem in the Middle East. Together, the trio serves not only as a window into what is an alien culture for many viewers, but also a way to give Barry reason to stay true to who he is, rather than what he was.

But there’s definitely an undercurrent of awfulness to the Al Fayeed family. As I said, Khaled is shown to be terrible in the past, and reveals a hint of that now. Jamal is following in those footsteps, perhaps with an extra level of insanity and total lack of moral compass. Barry, too, exhibits brief flashes of that anger and cruelty in the “Pilot,” meaning back in this environment, he may struggle to hold on to his mature, civilized self, reverting to someone no better or more deserving than his relations.

Also starring Justin Kirk (Weeds), Alice Krige (Star Trek: First Contact, meaning FX now has both Borg Queens), Moran Atias (Crash), Salim Daw (Prisoners of War), and Mehdi Dehbi (Septieme ciel Belgique), TYRANT is an intriguing, complex, character-driven drama that will challenge worldviews and open audience’s eyes to global differences. It is important for showing us something we’re not used to seeing, but it’s also fully engaging on its own, with family and political drama, apart from the setting. The acting is terrific, the set design is spectacular, and the pacing is near-perfect. I am definitely hooked.

TYRANT premieres this Tuesday at 10 p.m. ET on FX.