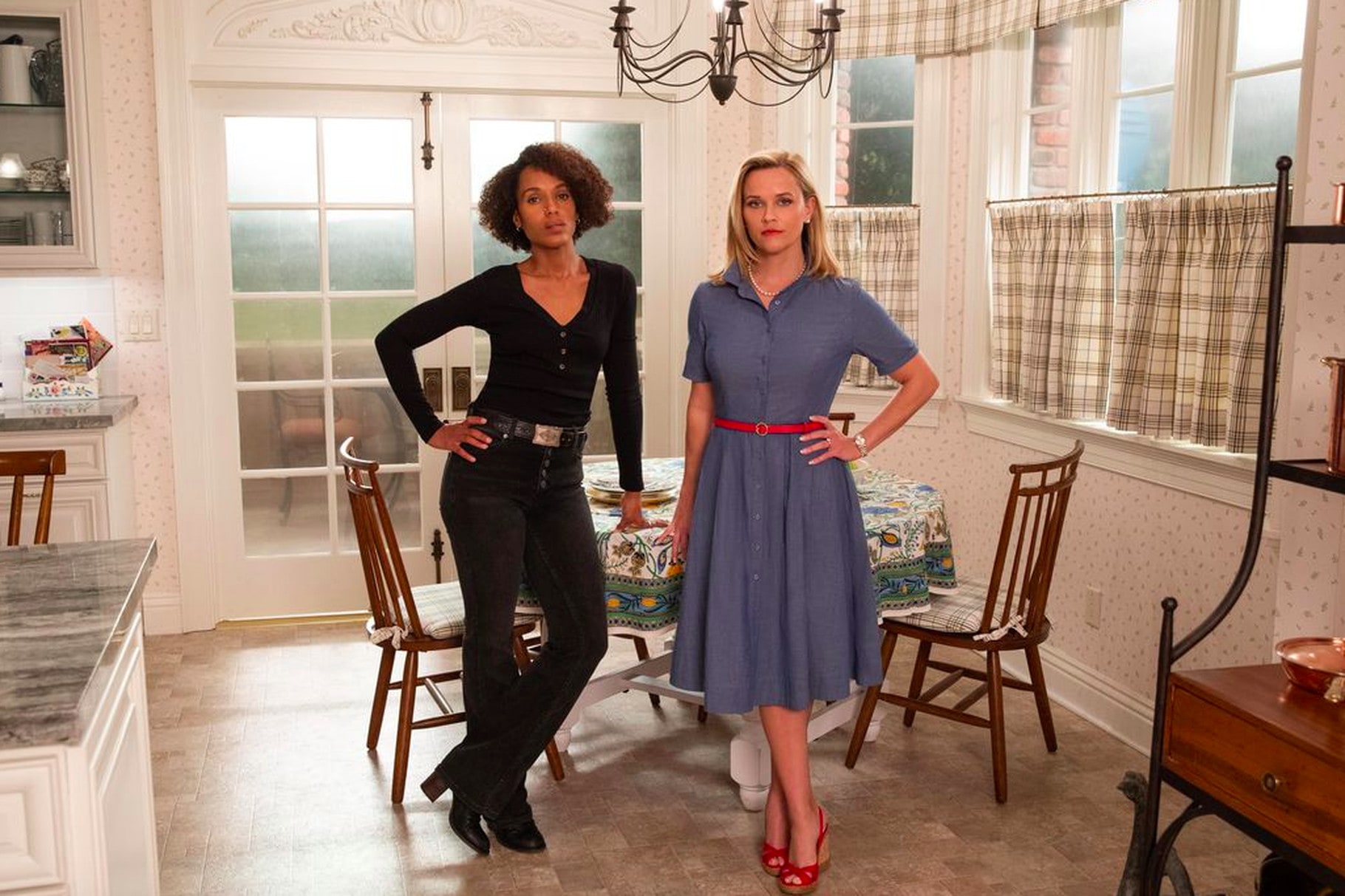 Tomorrow, Hulu premieres LITTLE FIRES EVERYWHERE, a mini-series adaptation of the novel of the same name from Celeste Ng. It’s the story of two families in Shaker Heights, Ohio in the 1990s. One is comfortably upper middle-class, husband and wife with four kids. The other is a single mom and her teenage daughter, sometimes homeless, always on the move, who blow into town. One kid from the first family is a misfit, and the single mother might be, too. Their worlds collide in interesting fashion. And, of course, there’s fire and destruction, as the opening scene promises.

The cast is led by Reese Witherspoon (The Morning Show) as Elena Richardson and Kerry Washington (Scandal) as Mia Warren, both of whom are producers on the project, as well. Both of these actresses are accomplished, and both are playing characters in their wheelhouses. As such, this seems like a strong duo to put out in front of the series.

Elena is a character study of a familiar archetype. She’s definitely racist and patronizing. She sees the world as one way and wants everyone to conform to it. Her good heart, wanting to help those she thinks need it, is commendable, but doesn’t excuse the glaring flaws, except maybe in her husband (Joshua Jackson, The Affair) and peers’ eyes. Yes, Elena’s attitude was a more common one at the time this story is set, but is a character everyone will recognize, and there is definitely a new version of the personality today. The attitudes haven’t gone away. It’s good the story doesn’t try to excuse her behavior, but instead paints a full picture of the woman.

Mia is not quite as glaringly familiar, but still relatable. She is warm and loving and protective of her daughter, wanting her to succeed. But she has flaws, too, being defensive and flighty, not always opening up with her daughter, and dragging her around without warning, frequently upending her life. Having these elements to her keeps the audience from needing to side with either Elena or Mia when they’re at odds. Usually Elena is obviously on the wrong side of those disagreements, but we get to see a more complex dynamic than we might have in a lesser show.

LITTLE FIRES EVERYWHERE doesn’t seem to be trying to pass judgment or send a message about Mia or Elena. It’s just showing fully formed individuals whose orbits happen to intersect by circumstance. It’s kind of nice there’s no bigger message here, even though I generally like when there is. Their actions will let the audience judge them without any assistance needed from the show.

The two women are at the center of the piece, but they aren’t the whole thing, with Elena’s son, Moody (Gavin Lewis, Prince of Peoria), daughter Izzy (Megan Stott, So Shook), and Mia’s daughter Pearl (Lexi Underwood, If Not Now, When?) taking a large chunk of screen time, too. For Moody and Pearl, it’s a sweet, innocent connection between two kindred spirits, and maybe even the development of romance. (I won’t spoil anything, but if the series follows the book, it won’t be so straight-forward.) For Izzy, though, it’s an isolated cry for help, rebelling against a family and school she doesn’t fit into, and a dark turn.

The child actors are good. If anything, we don’t get enough of Izzy in the pilot to really figure out what her deal is. But there’s plenty of time with Moody and Pearl to see a dynamic develop. I wonder if the other two Richardson kids will be further explored as the episodes unfold, or if the action will mostly be confined to these three. Either is a valid choice, but it does seem a little strange to have two ‘extraneous’ siblings hanging around.

LITTLE FIRES EVERYWHERE is set in a specific time and place, and there’s plenty done to show that. From the fashion to Janet Reno references to the bulky car phone, to the teenagers lacking cell phones and being excited about bicycles and abandoned vans, it feels very 90s. And yet, there’s a quality to the characters that doesn’t feel dated. Perhaps because the decade was so recent, add a little technology and they could still fit in to today’s world.

In general, I enjoyed the first episode of LITTLE FIRES EVERYWHERE, and will probably watch more. The first three installments drop on Hulu tomorrow, and the other five will be released weekly after that.