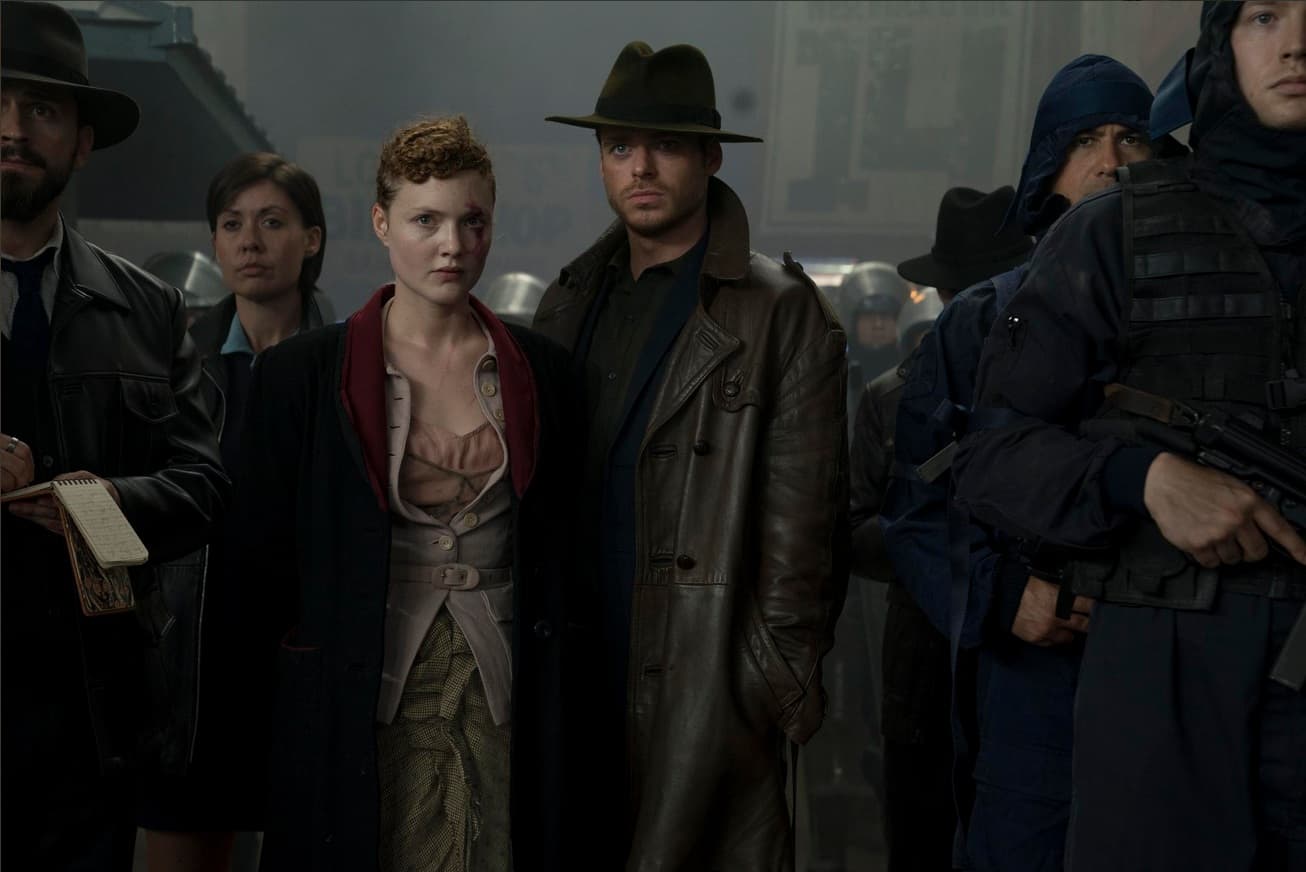 Amazon has joined the sci-fi anthology trend with PHILLIP K. DICK’S ELECTRIC DREAMS, which premiered yesterday. Each installment of the ten-episode season is based on a different novel or short story by the prolific author. The writers and directors are given wide latitude to adapt the source material as they see fit. A strong roster of actors rotate through the various parts, which have different running times, but are generally between 40 and 50 minutes, so about the length of an hour-long drama sans commercials.

I viewed the first two installments in preparation for this review. “Real Life” finds a future cop named Sarah (Anna Paquin, True Blood) dealing with the aftermath of a massacre. Her wife, Katie (Rachelle Lefevre, Under the Dome), suggests a VR ‘vacation’ to live out another life that her own mind makes up. Sarah accepts, and finds herself in the past from her perspective (roughly our present) as George (Terrence Howard, Empire). George recently, tragically, lost his wife, Katie (also Lefevre), and has invented a VR headset to escape into. But what quickly becomes confusing to Sarah/George as she/he goes back and forth is, which is the real world and which is the dream?

Episode two, “Autofac,” is set in a post-apocalyptic landscape where the surviving humans are being killed off by pollution from the still-running factories. Emily (Juno Temple, Vinyl) and her friends concoct a plan to contact the artificial intelligence running the factory, which sends a customer service bot (Janelle Monae, Moonlight) to meet with them. Will Emily’s plan to shut down the machines work? Or has the Autofac out-thought her every move?

Both of these are entertaining, if dark, installments. They have high-quality concepts that mess with one’s mind and have one guessing the nature of reality. Some of the twists you may see coming, but certainly not all of them. Written by Ronald D. Moore (Outlander, Battlestar Galactica) and Travis Beacham (Pacific Rim) respectively, they make these ideas understandable, couched in relatable characters who are also complex. They also look visually stunning, especially the future parts of “Real Life,” which features flying cars and giant, electronic advertisements.

And yet, ELECTRIC DREAMS is no Black Mirror. It’s hard to put my finger on why exactly it falls short by comparison to today’s defining sci-fi anthology series, which recently released a fourth season on Netflix. Both are similar in makeup and the talent behind them. But ELECTRIC DREAMS just seems a little less cohesive, a little more quickly done, and little cheaper, for lack of a better word.

Perhaps they shouldn’t be held up against one another, as similar as they may be, because there are important differences, and with short seasons, there are room for both. It’s a pleasure to get so much quality science fiction in this era, and no one need choose between the two. Though, if you had to, I think it’s a pretty clear choice in Black Mirror’s favor.

Perhaps because the writers are reigned in a bit by having to go off of Dick’s works, as brilliant as they are, it gives them a little less room be imaginative. That may not be the real issue; I’m really having trouble figuring out what the difference is. That’s just the only thing I can think of that would change the approach in how these stories are told.

Still, it’s not like ELECTRIC DREAMS is bad. I am interested enough to see what other concepts are explored. I just don’t think it will be giving its peer a run for it’s money at the top of the heap.