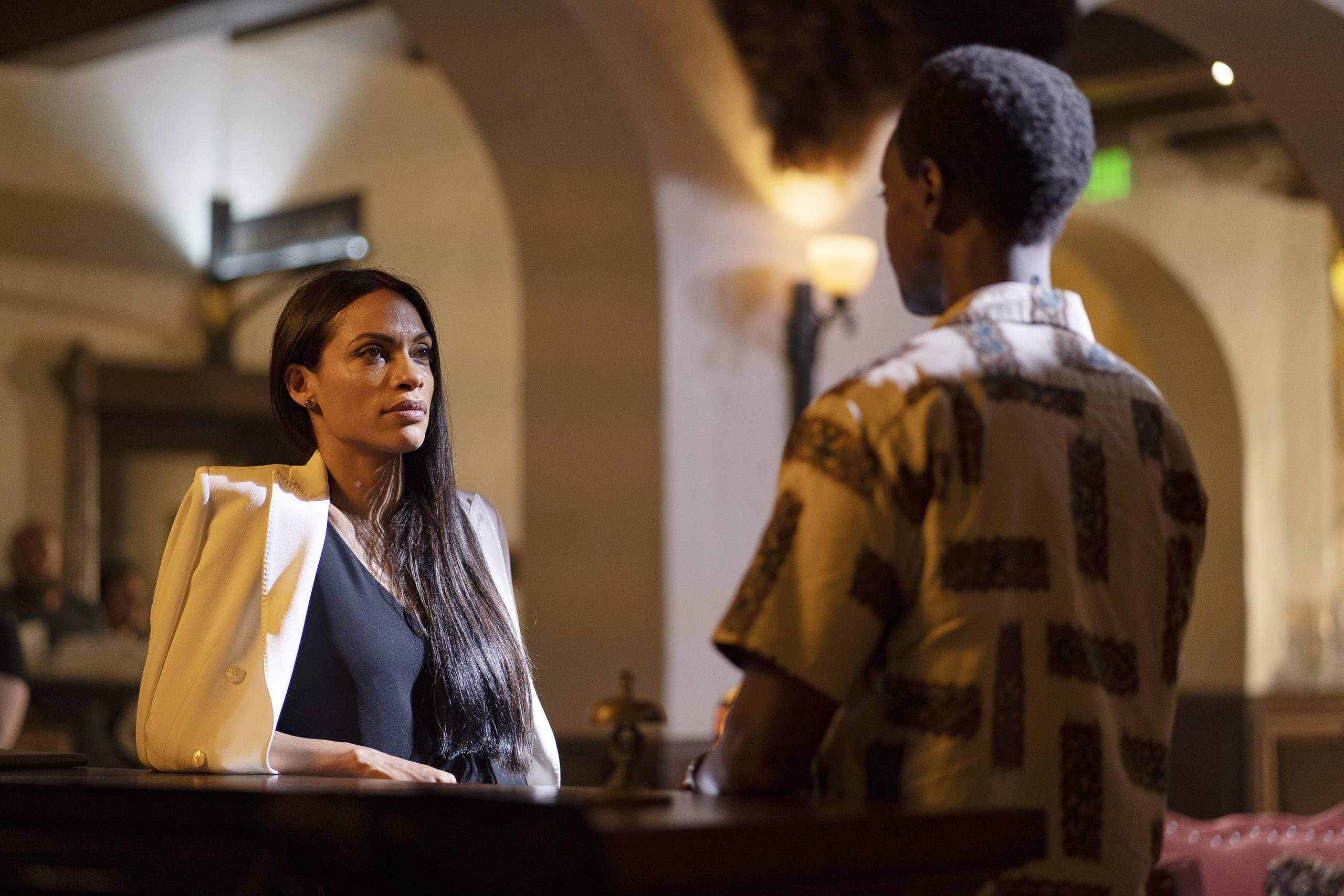 USA has a new stylized mystery drama entitled BRIARPATCH. A police officer and landlord is blown up in her patrol car in her own hometown. When the officer’s sister, Allegra Dill, returns and begins asking questions, it soon becomes clear that there is no shortage of criminal activity and quite a few secrets in what otherwise appears to be a sleepy town, and it’s going to take awhile to find the truth. Allegra is determined to stay as long as it takes, though others would like to claim her time.

Rosario Dawson (Luke Cage, Rent) stars as Allegra, and it is well past time Dawson had her own starring role. She is a fine actress, and excels at adding subtle complexity into any part, be it comedy or drama based. She has a way of seemingly tough and vulnerable simultaneously, which makes Allegra so much more interesting than the hero archetype. She is magnetic on screen.

The rest of the cast in the pilot is lesser known, other than Jay R. Ferguson (Mad Men) as Jake Spivey. But USA’s website reveals Alan Cummings (The Good Wife) and Kim Dickens (Fear the Walking Dead) are involved, and those already present from the beginning seem solid. Edi Gathegi (The Blacklist) stands out as Singe, whose allegiance is murky, but he seems relatively reliable, as far as any local is.

Apart from Dawson, the best thing BRIARPATCH has going for it is the tone. It feels a bit noir, though firmly set in the present. It’s definitely slow-burn, but not so slow as, say, The Killing. The atmosphere is of a specific time and place, and although it’s a little hyper-realistic, it’s also grounded. There’s an underlying bizarreness, best exemplified by the escaped zoo animals seen around town, that doesn’t go as far as Twin Peaks, but still makes it seem like this won’t be a typical detective show, either. (True, Allegra isn’t technically a detective, but it’s pretty obvious that she’s a detective.) Surprise twists seem like they’ll be a regular thing.

The questions pile up immediately and get deep pretty fast, starting with how Allegra’s sister afforded the building she owned on her police salary. The town itself is full of shady characters, with each person we meet hiding something. They likely aren’t all sinister, but it’s impossible to know who should be trusted from the start. Below the surface level of the central case, there is a lot going on with Allegra herself, from her past with rich guy Jay, to her current fling with a married Senator (Enrique Murciano, Bloodline). Neither of these things are explained explicitly, but seem to be connected, and I wouldn’t be surprised if they tied into the murder of Allegra’s sister.

The biggest weakness of BRIARPATCH is just how connected everything is. I mean, why is Allegra’s outside life and career following her back to her hometown? Sure, there could be a reasonable explanation for it, but it seems a stretch. And if all the various moving pieces right now end up related, as feels likely based on the connections drawn from the pilot, that could end up hurting the realism of the piece.

That being said, I found BRIARPATCH very enjoyable. If I still had cable, it would definitely be on my recording list, and if I find it convenient on streaming, I’ll probably binge it. Dawson alone makes it worth it, and I like the writing and style of the piece. With hardly a smile to be seen, it somehow still manages to be fun. And it certainly looks like it’ll be put together cohesively, a very important feature in the current era.