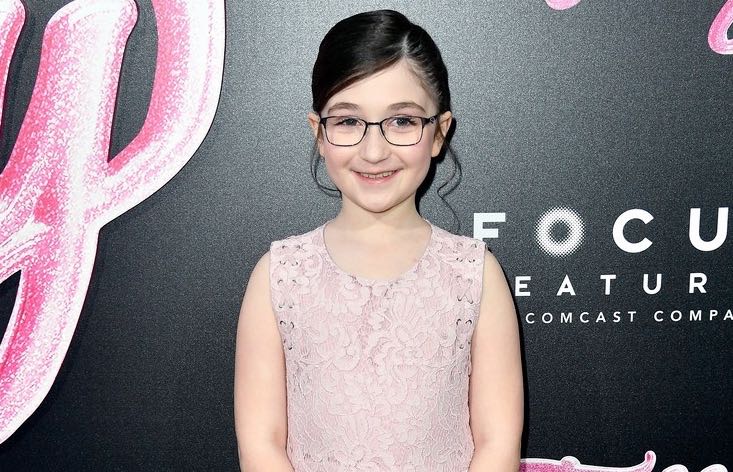 Upcoming young actress Lia Frankland gets her big movie break in the new comedy film “Tully” co-starring with Charlize Theron and Mackenzie Davis about a mother who hires a nighttime nurse to assist her with her children. It is a heartwarming tale of family, motherhood, and bonding with those who help make your life just a bit easier. Lia’s performance adds to the charm of this amazing film. In an exclusive interview, Lia previews her role win “Tully” and reflects about being a working young actress in Hollywood.

What was the initial appeal for you about portraying Sarah and working on “Tully”?
LIA: Initially, I thought it was pretty interesting to get to do a role with some funny lines because I hadn’t done that before. Then I found out more about working with Charlize Theron, Jason Reitman, and the rest of the amazing cast and I knew I was in for something special.

How would you describe who Sarah is in the film?
LIA: Sarah is Marlo’s eight-year-old daughter. Sarah struggles a bit with feeling overlooked sometimes by her parents. Her brother Jonah has some issues and because of that the focus is often on him. So Sarah has to figure out a way to deal with that and also let her parents know that she needs more of their attention.

What do you most admire about her?
LIA: I admire the fact that Sarah says what’s on her mind. She’s not afraid to speak up even when things get awkward. I try to do that in my own life as well.

What is it like working alongside the talented ensemble on “Tully”?
LIA: The cast was amazing. Everyone was really nice and friendly, but also super prepared and professional. It was inspiring to work with people who are so good at what they do.

Who did you get to work with most of the film and what was that experience like?
LIA: I was working most closely with Charlize [Theron] because she is my mom in the film. We got to hang out together a lot between scenes. We had lunch together a few times. She was super nice and welcoming. It was also amazing to see how she just becomes the character of Marlo. I hope I was able to pick up some things from her amazing acting.

Do you have any favorite scene that you can share from working on the film?
LIA: Probably my favorite scene was one where I got to sing with my mom (Charlize). It was like having two dreams come true at the same time – being in a Hollywood movie and singing in it too! We had a blast filming that scene, it was so much fun!

As an actor, what has been the one thing you have taken away from the experience of working on “Tully”?
LIA: The whole thing was an incredible experience and I’m sure the memory of it will last my whole life. It was great to work with such an incredible cast, like Charlize [Theron], Mackenzie [Davis], Ron, and Mark, and of course our incredible director Jason Reitman. Most of all, I think I will always remember the friendships, including becoming such good friends with Asher Miles Fallica, who plays my brother in the film.

What was your proudest achievement working on “Tully”?
LIA: I think I am most proud of just getting to be a part of such a great movie. I prepared really hard for the role and I hope I did a good job.

You also worked on DEAD OF SUMMER. What did you enjoy about working on that show?
LIA: Working on DEAD OF SUMMER was so much fun. It was great working with all of the cast and crew. Elizabeth Mitchell was very supportive and really took me under her wing while I was on the show. That meant a lot to me and I will always remember that.

What did you take away from your acting experience on DEAD OF SUMMER?
LIA: I remember being really impressed with how all of these experienced actors did such a great job of keeping their acting consistent when they were reshooting scenes from different angles. I really tried to watch and take in how they would all do that.

What has surprised you most about your career so far?
LIA: I think the most surprising thing has been that I got to be a part of a really terrific movie in “Tully.” To be able to work alongside Charlize Theron and Jason Reitman is a dream come true. I feel really lucky.

What are the perks of where you are in your career right now?
LIA: I think it’s pretty great that I get to have this acting career that I love but also have a really normal life where I can still go to school and spend time with my friends and family and pursue some of my other interests, like music. It kind of feels like I have the best of all worlds right now.

Has there been any great advice that you have gotten about working as an actor?
LIA: I have received lots of great advice from my acting coaches. I think the thing that has really stuck with me the most is to avoid trying to “act” and just “be” the role and actually feel the character’s emotions.

What advice would you offer to other upcoming and aspiring actors?
LIA: The first thing I would suggest is to “go for it!” You have to really go after your dreams. The other thing would be that I think you have to be willing to put in a lot of hard work. But if you have both of those things going then I think amazing things can happen!

Do you have any other upcoming projects that you can share that fans should keep an eye out for?
LIA: I just recently had an audition that I was really excited about. Unfortunately, I can’t talk about that right now but I’m super hopeful that it will work out. Be sure to follow me on social media because that’s where I would be posting any news about upcoming projects as soon as I’m allowed to!

To see Lia’s wonderful performance in “Tully,” be sure to catch the film at a movie theater near you when it is released on May 4th. Than to find out more about the film, you can follow it on Twitter @TullyMovie.