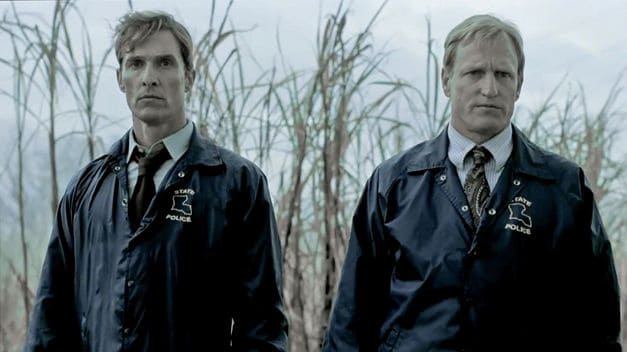 By the time you read this, you’ve likely already heard of HBO’s TRUE DETECTIVE, premiering this weekend. And while hearing of it, you’ve probably noticed words like “magnificent,” ”intoxicating,” and “exceptional” tossed around. Yes, no show or movie releases quotes about itself without presenting their work in the best possible light. But in this case, if anything, those words do not do TRUE DETECTIVE enough justice.

TRUE DETECTIVE may be a crime show, it’s true, but it’s on a much higher plane that most of its genre, with a focus on characters and mythology spanning seventeen years, from 1995 to 2012, rather than on a case of the week. In this way, it’s like Broadchurch or The Killing, but I would argue it’s even a step smarter than those in the writing and acting. It’s a phenomenal, memorable program, everything a drama should be.

The biggest pitfall a new series faces when being lauded with such praise is how it will continue to maintain such high standards over time. TRUE DETECTIVE solves this by being an anthology series. Each season will be self-contained, with its own cast and characters. Even if the show does not get a second outing (though it has not aired, a renewal seems a given at this point), everything will be wrapped up at the conclusion of these eight episodes, which should leave viewers very satisfied, indeed.

This tale begins with “The Long Bright Dark.” A young woman is found murdered and posed in a grotesque, artistic fashion, a la NBC’s Hannibal, and Detectives Rust Cohle (Matthew McConaughey, Dallas Buyers Club, Magic Mike) and Martin Hart (Woody Harrelson, No Country For Old Men, Cheers) are assigned the case. Naturally, they immediately face difficulties due to a lack of clues.

As they figure things out, older crimes begin to come into play. A local mystery of a missing girl may very well be tied into this most recent act, and the men are smart enough to see this, following any lead they get. They don’t make it too far in the first hour, but there is definitely lots of depth to plumb over the rest of the run.

In 2012, two other detectives are grilling our heroes, who haven’t seen one another in a decade, on this case. But they questioners actually seem at least as interested in the dynamic of the partnership than the dead girl, which begs the question, why? And what went wrong that split them up?

Not that Hart and Cohle were ever good friends. At the beginning of “The Long, Bright Dark,” they have been working together for three months. However, they’ve yet to have a personal conversation. Perhaps spurred on by the case, or finally accepting Hart’s wife’s (Michelle Monaghan, Gone Baby Gone) dinner invitation, Cohle comes out of his shell. Hart immediately wants to push him back into it.

The performances by Harrelson and McConaughey are nothing short of amazing. McConaughey has been trying to break the “shirtless guy” mold he developed early in his film career, and TRUE DETECTIVE definitely proves his chops as a traumatized alcoholic obsessed with death. Harrelson, meanwhile, has long been respected, and this will be icing on his cake resume, playing the intelligent family man, fair-minded enough to appreciate Cohle’s contributions, even as he despises the guy.

Both men are very different in the past and the present, both in physical appearance and in attitude. All of this comes together in a very visceral, moving way. The makeup and hair choices are flawless, hard to believe the guys could look so different, and the actors in the 2012 stuff draw us in with how their characters have changed, and we wonder what their lives are like now and how they got that way.

The two leads are the reason to tune in, pure and simple. As I said, the story if phenomenal, brilliantly crafted and well executed with a beautiful production, but it’ll be hard to focus on anything other than McConaughey and Harrelson because they have such presence. These are definitely defining roles for them, even though they’ve already had plenty of good parts before.