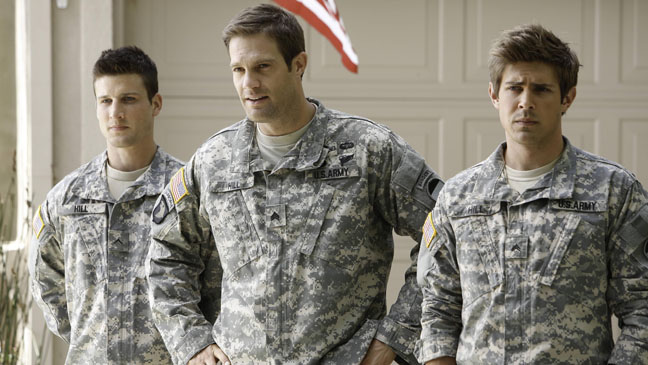 From the mind of Kevin Biegel, co-creator of Cougar Town, comes the new FOX comedy ENLISTED. Set at an army base in Florida, super soldier Sgt. Pete Hill (Geoff Stults, The Finder) is demoted after punching out a senior officer and assigned to head a band of rejects. Among those he now commands are his younger brothers, Randy (Parker Young, Suburgatory) and Derrick (Chris Lowell, Private Practice).

ENLISTED is a little like The Bad News Bears and any other sports film in which a reluctant coach with personal problems of his own has no choice but to reluctantly turn a team of misfits into a superior force. Which means the premise is a pretty familiar formula.

But it’s been awhile since we’ve had a war comedy on television. In the old days, Hogan’s Heroes, among others, portrayed the more amusing side of the armed forces in zany situations, and for a long time, M*A*S*H ruled the airwaves, albeit with a more serious take as the years went on.

ENLISTED does not appear to be something that will get serious. By setting it safely in the United States, there is no life-threatening danger; no bad guys must be stopped, no live grenades are being flung at them. And in a half hour sitcom format, it seems unlikely it will examine the heavy issues soldiers face after returning from overseas.

In this last point, I draw your attention to the way Pete is portrayed. His first scene is set in Afghanistan during a firefight. Yet, he’s too busy showing off pictures of his brothers to realize that he could be shot at any moment. This scene is informed by a later conversation in the “Pilot,” which makes it less silly, but still, there isn’t any sense that harm could come to him. Upon returning to the U.S., Pete is not plagued by night terrors or overwhelmed by a sense of relief at being away from the action, actually wanting to get back. Even the anger Pete exhibits when striking a senior officer doesn’t seem like a serious problem because Pete is just defending his men, not battling internal conflict.

Pete’s brothers are even less complex. Derrick is a jerk who doesn’t care about his job, but that’s just because he feels neglected by Pete. And Randy is an incompetent imbecile with too much enthusiasm, blind to even the slightest hint of reality.

Of course, this “Pilot” is only a starting point. Over time, the stories and characters could grow and deepen, and that’s what I’d hope for from it. I could even see a point where Pete’s crew is competent enough to be shipped to the Middle East, but that’s many years in the future, if it ever comes at all.

From the start, ENLISTED is much more concerned about being funny than being complex. It works. The writing is sharp and the situations are humorous. From Pete’s sexually-charged interchange with rival squad leader Jill (Angelique Cabral, Friends With Benefits), to an obsession with Bradley Cooper, to misunderstandings because Ryan doesn’t understand, well, anything, there are a lot of laugh-out-loud moments.

There’s also heart. It’s easy to feel the affection between the brothers. They may not always get along, but they care about one another, and their father having died during his own military service, they also look out for each other. Keith David (Platoon) plays Cody Wallace, their boss at the base and a friend of the Hill father’s. He oversees the boys and makes sure they stay on the right path, providing guidance and advice. And the characters get the opportunity to return a dog to its happy owners.

The charm oozes out of every pore of ENLISTED, and it looks to also boast a recurring cast of vaguely familiar, but not yet famous, faces that should add to the proceedings. It may not be the best show, or that realistic, but it’s warm and sweet and humorous, and for a sitcom, that’s a good place to start.