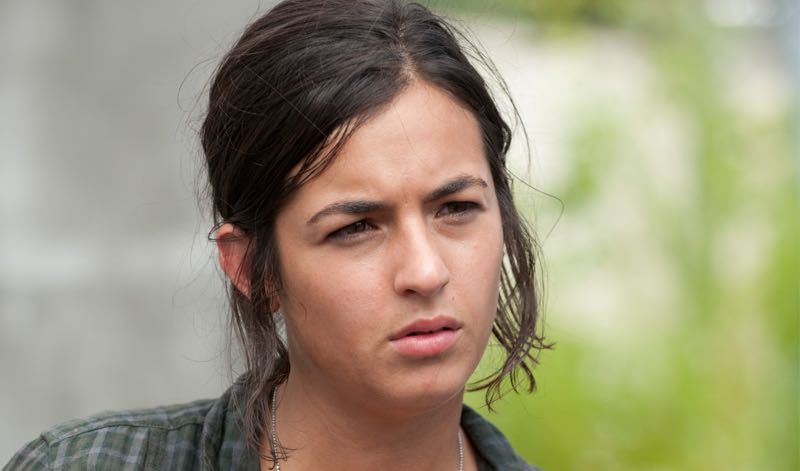 Rolling right along on its hot-streak, AMC’s zombie-thriller series THE WALKING DEAD returns for the second half of Season 6 with an even darker journey ahead for its surviving heroes.

Current survivor in the cross-hairs is Tara Chambler, portrayed by Alanna Masterson.  Having joined the series in Season 4, which is notorious for killing off regulars and guest-stars with equal aplomb, the fact Tara has survived through Season 6 is remarkable and evidences the desire to keep her around as witness to the horror closing in around from all sides and to see how Tara will push the boundaries of who she is in the face of such a stark need for survival.  As a former soldier and police officer in training, Tara also has a natural set of skills essential and useful in a zombie-apocalypse.

For Alanna Masterson, the role has been a dream come true.  It pushes her, challenges her and incites a passion to demonstrate that Tara is a survivor rising from the ashes of whatever horror THE WALKING DEAD next throws at her.  In an exclusive interview, Alanna talked about what is coming as Season 6 continues for Tara and the other heroes of THE WALKING DEAD.

What do you love about Tara?
ALANNA:  What I love about Tara is she was the strongest member of her family.  She took care of her family and did all the runs.  They were hold up for quite awhile until everything went down.  I think that is what I would do if something were to happen and go wrong.  I would be do everything to keep my family safe, healthy and happy.

Tara seems like she has transitioned a bit from where she started from in Season 4 to who she is now.  How would you describe who she is when the show returns?
ALANNA:  I think her transition — like obviously joining a new group and losing her family — I think her basic roots are that she is willing to do whatever it takes.  At first, it was to help Glenn (Steven Yeun) get to Maggie (Lauren Cohan) and do whatever was needed for Rick (Andrew Lincoln) and the group.  Then when they got to Alexandria, she was willing to go on runs and provide for the community as well.  So I think her transition is that she is finding out who she is in this new group now that she is apart from her family.

Where is Tara’s head and her heart at when the story picks up with her again?
ALANNA:  I think her heart is very much happy that she found Denise (Merritt Wever) and is surprised really that she was able to find someone that she cares so much about.  But I think in her head that Tara is trying to be logical.  She’s a very happy-go-lucky character, but in the back of her mind I think that she is very pessimistic in the sense of “this doesn’t last long” — “love does not last long.” I don’t think she shows it.  I think the audience sees her as someone who is willing to make the best of any situation.  But I think in the back of her head, she is like: “Now that I have met Denise, I don’t know what good can come of falling in love.”

It appears that Denise and Tara are going to be separated for a bit.  Is Tara going to go after Denise and take on Wolves Leader or will Tara have to take another path?
ALANNA:  You’ll see what happens.  But I think she is going to do whatever she can to help Denise, for sure.

That guy seems a little scary. I would think Tara would want to get some folks to go after him with her rather than just on her own.
ALANNA:  Yeah, she’s got Eugene (Josh McDermitt) and Rosita (Christian Serratos) there.  Eugene is more smarts than he is able to take someone down, but she’s got Rosita and they are two badass chicks.  They will get Denise back.

Everyone’s been talking about Negan (Jeffrey Dean Morgan) joining the show.  Is he going to be someone that Tara crosses paths with?
ALANNA:  [Laughs] I don’t think I can answer that question.

What have you learned working on such a crazy, apocalyptic show?
ALANNA:  What have I learned?  I work with an incredible group of people.  I am so grateful every day for my job. I get to go to work and I am happy to be surrounded by the artists that I am surrounded by, including the crew. I’ve just learned how special those relationships are — the bonds you make with your fellow actors, directors, and producers.  What I take my next job, whenever that is, I will take a sense of respect and responsibility on the set.  That’s what I think I have learned the most.

Has there been any particular challenges working on the show?
ALANNA:  It’s definitely a challenging show.  We are working against the elements and we are in the dead of the summer most of the time.  Then at the tail end, when it starts to get freezing cold.  So we have a bit of both extremes.  It’s a challenge, but everyone is willing to do it because the show is so good and so successful.  Everyone picks each other up by their bootstraps and it’s, “let’s do it — let’s all go” and no one complains.  It’s awesome.

I could just envision a horde of frozen zombies out there where you guys are working.  That sounds kind of cold!
ALANNA:  [Laughs] Yeah!

What surprised you working on the show as far as the storylines?
ALANNA:  I think the writers do a pretty good job keeping the viewers as well as the actors on their toes.  Every script I get, I’m pretty surprised about certain directions it takes or just going, “Wow! I didn’t even think of that.”  We don’t know the whole season.  It’s not like we start our season and know everything that is going to happen upfront.  So it’s a nice surprise.  And it’s also like, “Well, if this is going to happen, like if we’re getting to Alexandria, what does this mean? And now Tara has met Denise, what does that mean?”  They don’t tell you anything.  So it is kind of nice.  You are constantly making fresh, kind of spontaneous choices as an actor and that is awesome.

THE WALKING DEAD is one of the biggest shows on television.  How does that feel for you?
ALANNA:  It feels pretty awesome.  I have been an actor my whole life and it’s been very, very hard.  I had several shows that didn’t go.  So this feels like an awesome acknowledgement and reward just getting to be on this show because of how successful it is.  But I also feel like I had earned my stripes before I got here and now I am just learning how to be a better actor.  I am learning from my incredible peers.  It’s something special.  I know a lot of people say that about our show like with other cast members, but it really is something special.  We have some magic down here in Georgia. It’s pretty incredible.

Look back a bit, what has been some of your favorite moments or highlights working on the show?
ALANNA:  I loved my first season when I came in and got to work with Steven [Yeun]. We are really close.  We bonded as actors and we both have such a love of cinema and art and photography.  Working with him was incredible.  It was fun.  We were all just this separate group.  We obviously missed all the other actors before our characters got to Alexandria.  So that time was pretty awesome.

Would you say that you as a person have learned a few tricks on how to survive a zombie-apocalypse?
ALANNA:  I feel like I have learned some tricks.  There was an episode last season where Tara heats a can of water over a trash can with two metal hangers, so it acts like a stove.  That was a really cool trick to learn.  So I feel like I have some tricks up my sleeve. For sure.

What would you recommend if someone found themselves in a hand-to-hand combat situation with a zombie?
ALANNA:  Well, they are kind of slow.  So you can definitely outrun them.  But if there are tons of them, get to high ground or kill them right in the head with something sharp.

What can you tease about what is upcoming?
ALANNA:  The back-half of the season is going to be incredibly tense.  People are going to be sitting in their chairs so nervous watching the next 8 episodes.  It is a really a remarkable 8 episodes.  The writing is fantastic.  The acting is so good.  And monumental things are about to happen.  It’s pretty cool.

Do you have any upcoming other projects that you are working on?
ALANNA:  Yeah, we have a hiatus, so I am auditioning and I am also a writer.  I am trying to focus on finishing my script.  That’s nice.  But we’re all on a group text with the actors, producers and writers and it’s like, “Hey, how’s everyone doing? Where is everyone going?”  We all just miss each other and want to hang out all the time.  It’s pretty funny.

To find out just how Tara fares upon meeting Negan this season, be sure to tune in for the return of THE WALKING DEAD on Sunday, February 14th at 9:00 p.m. on AMC.