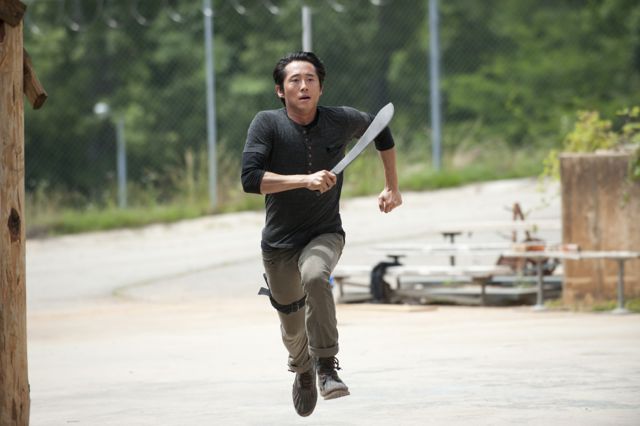 The people who make AMC’s THE WALKING DEAD have promised an intense fall run. This week’s episode, only the second in this batch, lives up to that promise. “Infected” finds a disease spreading through the prison, resulting in a high body count. This also makes Rick (Andrew Lincoln) re-evaluate his new peaceful lifestyle.

As season four begins, Rick has stepped away from a leadership role and put away his gun, making his son, Carl (Chandler Riggs) do the same. This makes sense for his character, having sacrificed and lost a lot. He sees his son Carl going down a dark, violent path, and doesn’t want that for his family. Rick leads by example, putting his job as a father ahead of his commitment to the group.

Daryl (Norman Reedus) tells Rick he deserves the break, and leaves the door open for his return to power. Carl, too, thinks Rick can take the top spot back any time he wants it, but doesn’t begrudge his father the decision, and obeys as a good son would. I do think this development has been beneficial for Rick and Carl, even if it is only temporary, as we’ve seen Carl soften again.

“Infected” forces Rick to shift back, though. Suddenly, there are walker attacks within the walls of the prison. He may be able to ignore what’s going on outside of the gate, playing the farmer, but he can’t turn his back on something happening right here. He has to protect himself and Carl, and that means not being the pacifist any longer. This is why Rick and Carl rearm at the end of the hour, and why we see Rick step back into an active part in the larger group.

Carol (Melissa McBride) faces the same thing in deciding whether to teach the children at the prison how to defend themselves. She does so without informing their parents, which will surely be polarizing when they find out. Yet, she has a good point, that she’s worried the parents will not agree to the instruction, and when anyone can be attacked at any time, regardless of age, even the young children must be able to wield a knife.

“Infection” illustrates exactly why Carol is in the right, as Patrick (Vincent Martella) eats and turns much of Cellblock D over night (they must be really heavy sleepers, huh?). About a third of the prison group dies in this outbreak, and children and adults are equally vulnerable.

One of the victims is the father of Mika (Kyla Kenedy) and Lizzie (Brighton Sharbino). Carol at first offers to end their dad for them, but when one volunteers, Carol is disappointed when she won’t go through with it, calling the girl weak. This is more controversial than the knife lessons themselves, especially as Carol will now be acting mother to the sisters.

On one hand, it makes one squirm to see Carol coming down hard on a little girl who can’t bring herself to stick a knife in her beloved father’s head. This is something no child should ever have to do, and even though we see Carl shoot his mom last season, and it’s not something just anyone could do, and Carl is messed up by the event. On the other hand, Carol is right, hesitating could mean the different between life and death. If Carol wasn’t there to finish the task, the girls could be dead.

This is the world in which THE WALKING DEAD takes place. It’s a whole new kind of morality, with values shifting to be realistic to the times. Children do not get the luxury of being kids, forced to emotionally grow up very fast, whether they are ready to or not. This will produce some psychopaths, like Carl was on the way to becoming before Rick pulled him back, and some tough heroes, who are prepared to do what’s necessary to keep themselves and their loved ones safe, like Rick is. The line between hero and psycho is disturbingly thin, and being a parent is harder than ever.

Is this why THE WALKING DEAD scores the huge viewership it does? Because, even though it makes us uncomfortable at times, it also shows us something no other series is willing to? It’s a gritty reality in a terrible world, pushing humans into situations many alive today will thankfully never experience. It’s gripping storytelling at its best.

The question is, what will the effects of the “Infection” be? With people dying left and right, and a zombie horde pushing down the fences (thanks in part to someone feeding them rats), there is danger on all sides. Not to mention, the Governor is still lurking out there somewhere. The prison seems like a stable, secure place last week, but this episode reveals it is just a fragile as any other environment. It may soon be time to move on.

Tyreese (Chad L. Coleman) will probably be ready to leave the cells behind. His love, Karen (Melissa Ponzio), is one of those that falls ill, and then is burned. We don’t see whether she is a walker before being turned to ash, but one assumes so. If not, this could open the door to even more questions about how far one should go to pre-emptively protect the population. Also, I suspect Tyreese’s sister may be to blame, which could definitely strain the sibling bond.

Lastly, Michonne (Danai Gurira) gets nervous around baby Judith, not wanting to touch her, and wincing at her cries. THE WALKING DEAD isn’t big about showing flashbacks, so we may never know for sure the total reason why Michonne wants to avoid infants, especially as she gets along fine with older children like Carl. Yet, I like that the series lets us make our own assumptions, rather than spelling everything out. It may just be enough to know that there’s something there, and to watch her become less damaged.

“Infection” is a scary, intense episode, with some very questionable moments, which is good thing. When a show gives you intelligent plots and characters, who are layered with actions that may be disagreeable, but make sense, it provides plenty of fodder to debate afterward. It’s the modern-day equivalent of a water-cooler show, made to the highest storytelling specifications.