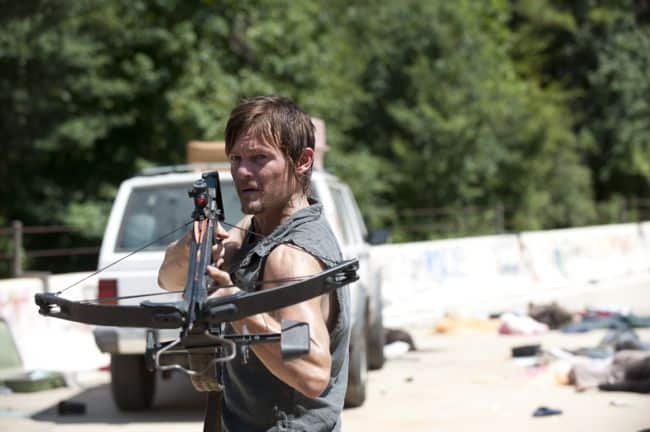 Things are tense at the prison in this week’s episode of AMC’s THE WALKING DEAD, “Home.” Rick (Andrew Lincoln) is out beyond the prison walls, chasing the ghost of his dead wife, Lori (Sarah Wayne Callies). Glenn (Steve Yeun) tries to keep it together, seeing himself as the substitute leader, but with Maggie’s (Lauren Cohan) moping unresolved, he isn’t doing much good.

I like the idea of Glenn as a leader because it gives the character something important to do. Yet, he is not cut out to make the tough decisions, at least not yet. He does OK, with a heaping portion of advice from Hershel (Scott Wilson). But he lacks the quality that leaders must have. I’m very glad that his promotion is temporary, as I don’t want to see him become something he’s not.

Hershel seems to be doing plenty of mentoring in “Home.” He helps Glenn, and he hobbles down to talk to Rick. While before he is an antagonist, whom Rick has to find an understanding with to even get them to stay together, now he has become the wizened advisor, more than proving his worth to the group, even without a leg.

I am not so crazy about Axel (Lew Temple) cozying up to Carol (Melissa McBride). She is spoken for. I know Daryl (Norman Reedus) has left the group, but that will be corrected. He’s too much a part of the rest, cares too much about the others, to stay away for long, even for a brother. For most of the hour, I’m expecting a little conflict between Daryl and Axel when Daryl returns.

I also begin to suspect that Axel may not be as good as he claims to be. The way his story keeps changing as he talks to Carol, adding new bits to his story as he goes that don’t quite match up with what he says previously, makes him seem shifty. I know that the group must trust outsiders periodically to make up for those that are lost, but I’m wondering if they’ve made a bad choice with Axel. Which is why I’m not too upset when he dies, though we’ll get to that scene in a minute.

Wandering the woods, Daryl quickly grows tired of Merle (Michael Rooker). They are clearly kin who did not fully grow up together, and while it’s hard to tell how long they may have been reunited before becoming separated in season one, it seems like it wasn’t for very long. They are two drastically different people.

When the series starts, Merle is a bad influence on Daryl. Now, Daryl has gotten enough good influences to take away the temptation of the evil whisper. Daryl knows another way now, how things can be better with people who look out for each other. It’s why he goes to the rescue of a family being attacked by zombies without expecting anything in return. When Merle tries to take advantage of the situation, it seems like it’s the last straw for Daryl, who isn’t willing to bend to Merle’s will anymore.

I am a little disappointed that Merle follows Daryl back to the prison, but not too much so. I worry about where Merle’s allegiance might lay in a big battle with The Governor (David Morrissey) if he senses that The Governor is going to win. But he also brings a level of conflict to the group, which is always interesting, and I’m curious to see how it all plays out, though I do not expect Merle to live past this season. I just hope Daryl doesn’t have to be the one to kill him.

In Woodbury, Andrea (Laurie Holden) is calmed by The Governor’s contrition. He vows no retribution against the prison group, and, for awhile, it seems like Andrea might be a good influence on him. It also makes it look like the war between The Governor and the prison won’t come until the end of the season, as expected, building up slowly to a large assault.

However, then The Governor goes and talks to Milton (Dallas Roberts), and mentions asking others about their loyalty. This is a sign that he’s just playing Andrea, the same way he so often plays a part in front of his people. I still don’t see the attack coming, though, until it happens.

For most of “Home,” the pacing is slow, and not a lot is happening. It’s a good episode, but not overly exciting. However, this seems to be THE WALKING DEAD’s new pattern, as it did just before Lori’s death, lulling us into a false sense of peace, especially those who’ve read the comics and think they know what’s coming, and then striking in an unexpected and sudden way.

The attack that The Governor launches on the prison is fantastic television. From Carol using Axel’s body as a shield, to the van releasing zombies into the prison yard, to Hershel’s last minute rescue, and the way that everyone bands together, proving their strength, it’s full of amazing moments. Yes, they are unprepared and scattered this time. But as The Governor rides away, there is little doubt that they’ll be ready when he returns, and once they are, they might just stand a chance.

Why doesn’t The Governor just finish them off now, when he has a prime opportunity to do so? Is it because he needs people to lord over, and scaring, not killing, the group gives him a sense of power? Does he think that Andrea might forgive him for an attack, but not for a slaughter? It’s unclear exactly what his plan is, but this is definitely only the first stage of the showdown.

I do think this will snap Rick out of his delirium. He seems to be doing better after his talk with Hershel, but the urgency of protecting his people against The Governor should be enough to fully right his path again. He needs to fortify their defenses and prepare to take on their greatest foe.

It’s sad that Tyreese (Chad L. Coleman) and his people don’t make an appearance in “Home.” Rick and the group desperately need the help. Will Tyreese come back? He’s important in the comics, but the reasons for his importance don’t seem very present in the series. After being threatened by crazy Rick, he has good reason to want to get as far away as he can, and why should he risk his neck fighting The Governor? Or maybe his absence for the fight in “Home” will keep him in the dark about the true threat Rick’s people face, meaning he can join back up without knowing the danger, which makes more sense for the story.

I admit, I felt a little disappointed for the first almost-two hours of this mid-season, when not a lot of adrenaline-pumping stuff happened. The end of “Home” more than makes up for it, and is a message to fans that they won’t have to wait until the end of the season for more action.