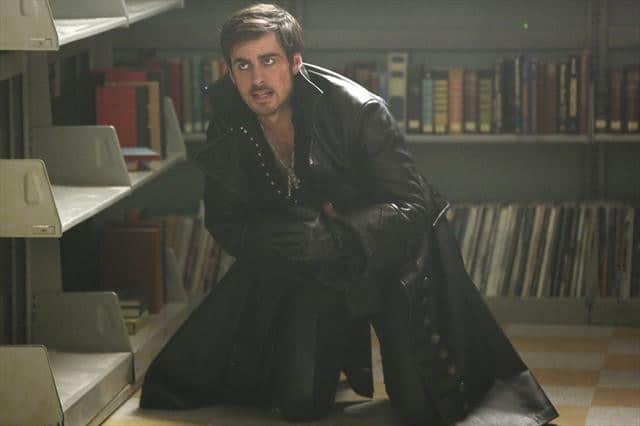 ABC’s ONCE UPON A TIME finally aired the much-anticipated episode “Manhattan” last night. In this installment, Mr. Gold / Rumple (Robert Carlyle), Emma (Jennifer Morrison), and Henry (Jared Gilmore) travel to New York City on their quest to find Gold’s long lost son. But when they get there, they uncover unexpected connections, and secrets are revealed.

I’m still angry at ABC for spoiling the twist that Baelfire is Neal Cassidy (Michael Raymond James) in their preview for “Manhattan,” which aired following last week’s episode. This is something some have suspected, but it seemed a little far-fetched at first, which is why it was dismissed by many. To give away such an important part of the story in a commercial is nearly unforgiveable, and just plain ridiculous.

However, that reveal did come very early in the hour, and there is still lots of great story to the episode that has not been spoiled. While light on action, “Manhattan” is heavy on drama, as Baelfire, Emma, Gold, and Henry all try to sort out their feelings for one another. It’s a complicated mess, Emma having lied to Henry about his dad being dead, Gold learning for the first time that Henry is his grandson, Baelfire furious at his father for abandoning him, and Emma not sure she wants Baelfire in her, or Henry’s, life.

ONCE UPON A TIME is about fairy tales and quests and magic, but it is also very much about family. This is evident right from the beginning, when Emma is known by viewers to be the daughter or Snow White (Ginnifer Goodwin) and Prince Charming (Josh Dallas), even if she doesn’t yet believe it herself. Since then, we have seen lots of plot involving interactions between children and parents in a variety of settings, including other characters, such as Regina (Lana Parrilla). There is quite a knot of relations tied up in this tale, and watching the characters try to unravel it, only to see it get tangled up further, is a great way to keep things moving along.

Bringing Baelfire into the picture, with his connection to multiple main characters, will further shake up the dynamics of the show. As Charming says, it’s a good thing they don’t celebrate Thanksgiving, as getting them all together at once would be a mess. Assumedly, Bae will want to be in Henry’s life so he doesn’t abandon his son, like Bae’s own father did, and Bae’s father’s father. Even if Emma and Baelfire don’t get back together, this ties them to Gold, and expands their clan.

Bae’s reasons for staying away from Emma all these years have to do with a curse and wanting to avoid his father. Learning about Henry changes that. Emma still has some justifiable anger at Baelfire to work through, but Bae’s reason for staying away from Emma have been lifted. This means a step in the right direction for the legion of fans whom are already likely rooting for them to be a couple, healing the divided family.

One moment during the whole New York sequence that really stands out is when Henry tells Emma that she is just as bad as Regina with her secrets. ONCE UPON A TIME does a great job of making their central characters complex, rather than black or white. But Emma hasn’t done anything on the level of the evil carried out by Regina. Are these just words of a child said in anger? And even if that is the case, can they easily be gotten over?

Regina would sure hope not. She is with Cora (Barbara Hershey), who has a scheme to get Gold to kill Henry’s family, leaving the boy for her. Clearly, this is a disastrous plan, as Henry would eventually find out the truth, no matter what Cora says, and there would be no coming back for Regina in Henry’s eyes then.

While I understand why Regina would listen to her mother, tempted back to her dark side, I am very pleased with the efforts Regina has been making this year to be a better person for Henry’s sake. Secretly killing his family, leaving herself as the default guardian, is the shortcut way to get Henry’s affection back, and she should know better than to take a shortcut again, because they don’t work. As is oft repeated, magic always has a price. Hopefully, she will come to her senses before she does something that ruins her forever.

During “Manhattan,” we also finally get flashbacks as to why Gold / Rumple left the Ogre War, a plot long referenced, but not seen before now. He did not do anything terribly noble or important, as some fans assumed, but instead, hurt himself to get sent home after a seer warns him that his actions will leave his son fatherless. Unfortunately, the seer’s gift and words aren’t explicit, and it’s actually the self-injury the sets Rumple on the course of events that causes his son, Bae, to grow up fatherless. Rumple tries to do what he thinks is best, but instead loses both his wife and son.

This makes Rumple an even more tragic character. He isn’t, at heart, good or evil, but is instead the embodiment of the two sides, a good man who has an evil power trapped inside of him, influencing his words and actions. We see why Milah (Rachel Shelley) loves him in the first place, and why she falls out of love with him. It’s a tragic, moving story that only deepens how much we care about the character.

But rather than letting Rumple / Gold end “Manhattan” on such a nice note, a father sacrificing his reputation and health for his son, no matter what anyone else thinks, we instead get a bit more of his dark side when the seer tells him that the boy who helps him find his son will be Rumple’s undoing. Rumple, in the flashback, flippantly replies that he’ll kill the boy. Now, knowing that the prophecy applies to Henry, his grandson, Gold still has a look on his face that isn’t pleasant, even if we can’t tell what he’s thinking.

Surely Gold would not go so dark as to kill his own grandson? We’ve seen that Gold has a soft spot for Henry, so it would make the murder even more difficult. Plus, we don’t know exactly what “undoing” means, and as Gold has seen, the glimpses of the future that he gets are sporadic and uncertain. Yes, the Dark One inside of Gold may want to off Henry, but hopefully the lighter side will win out. It’s a shame Belle (Emilie de Ravin) doesn’t remember who Gold is, and so can’t help talk him out of it.

There’s also the matter of destiny. The seer tells Rumple that he can’t escape his destiny. As viewers, we don’t yet know the destiny of each of the characters, but assumedly that plays a role in whatever the end game ends up being. Some things cannot be avoided, and this is the wild care that could change everything at a crucial moment.

Between the revelations, the family dynamic shifts, and some very dark hints of things to come, “Manhattan” is a truly excellent episode, one of the best of the series thus far. Which means you definitely shouldn’t miss the rest of the season. ONCE UPON A TIME airs Sundays at 8 p.m. ET on ABC.