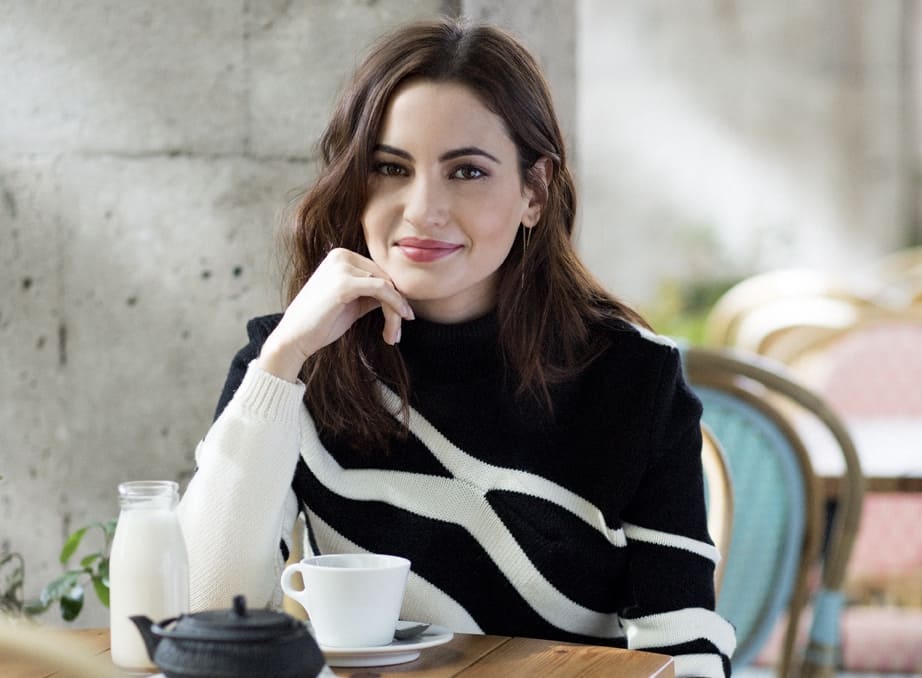 Having made a successful transition from being a young actor starring in Guillermo del Toro’s “Pan’s Labyrinth” to a young woman now co-starring in the fantasy series THE SHANNARA CHRONICLES, Ivana Baquero has captured the attention of fans across the globe. As Eretria, Ivana’s passion, fierceness and keen spirit is felt in every scene. She is just radiant. In an exclusive interview, Ivana shares what it is like to portray the feisty young woman who defends a magical realm and discovers her life purpose along the way.

What initially appealed to you about portraying Eretria and working on THE SHANNARA CHRONICLES?
IVANA: I’m a huge fantasy fan. I grew up reading Tolkien’s books and worshiping movies like “Lord of The Rings.” There’s nothing similar to that on television nowadays, so when I got the opportunity to participate in a production like SHANNARA, where we were going to shoot in New Zealand and learn to fight, horse-back ride, and portray such an athletic, empowering character, I knew I had to do it right away. It was exactly my cup of tea.

How would you describe who Eretria is at the beginning of Season 2 and how she has grown since we first met her?
IVANA: Eretria undergoes a remarkable transformation in Season 1. Essentially, she goes from being selfish to selfless, and in the quest to save her life and the world from a demon invasion, she learns about love, compassion, and friendship. By the end of Season 1, you’d think she’s “completed” her arch, but little do we realize that she has yet to learn the most important thing about herself — which she will explore in Season 2 — who she really is and where she comes from.

What do you most admire most about Eretria?
IVANA: I love her sense of justice and how, regardless of where she has come from and the things she’s seen, she always stands up for what she believes is the right thing and never betrays her principles.

What was it like working alongside such a talented ensemble such as Austin Butler, Poppy Drayton, Manu Bennett, Marcus Vanco, and James Remar?
IVANA: It was a blast! Most of us came from abroad to shoot in Auckland for over five months, so we all felt like a little family that supported each other. And while it was a long and challenging shoot, we were surrounded by amazing professionals and crew members, so the atmosphere on set was light and fun.

Any favorite scenes that you can share from working with each of them?
IVANA: Every day was an adventure! It’s hard to pinpoint a specific scene. In Season 1, Eretria mostly interacts with Wil, Amberle and Cephelo — so I had a great deal of time with Austin, Poppy and James. But Season 2 welcomes new characters and opens up a few more story lines which will allow for Eretria to interact with many more characters and for me, it made it even more compelling and exciting.

What has been your favorite part about working on THE SHANNARA CHRONICLES as a whole?
IVANA: Being able to shoot in New Zealand was certainly a major bonus. It’s an astonishing country, truly like no other. I felt so fortunate working there. You’re surrounded by nature and everyday you get to explore a different location. Within a few kilometers, you can get beach, forest, sand dunes, mountains etc.

Then as an actor, what has been the one thing you have taken away from the experience of working on THE SHANNARA CHRONICLES?
IVANA: I’ve learned so many skills that will be useful for me in the future! We were taught how to sword fight, horseback ride, dagger fight, do certain stunts. It was certainly a physical challenge, but at the same time, the opportunity to do so much action was one of my highlights and favorite parts of shooting SHANNARA.

What can you tease about how things develop between Wil and Eretria in Season 2? Are they destined to have a romantic future ahead?
IVANA: Whether romantically or not, Will and Eretria will always be destined to have a future together. They’ve been through so much together that inevitably they share a unique and unbreakable bond. Amidst pains and scars left behind from Season 1, Wil and Eretria will find a way to each other in Season 2.

Should fans be rooting for a reunion between Amberle and Eretria in Season 2, especially since Amberle was last seen turning into the Ellcrys?
IVANA: They should for sure! Whether it’s exactly what they expect or not, I don’t know, but they’re certainly in for a treat.

What has surprised you most about your career so far?
IVANA: I’ve gone from a little enchanted girl in “Pan’s Labyrinth” to a headstrong warrior in SHANNARA. It’s quite the leap.

At this stage of your career, what do you think you have learned from the roles and projects you have worked on?
IVANA: I’ve learned that each project is important in it’s own way, and is always a step forward. There’s jobs that are smaller than others, some that you’re more or less proud of, but every single one of them are a learning and growing experience.

Then what are the perks of where you are in your career right now?
IVANA: I love traveling, so one of the perks is being able to visit all these amazing countries and learn about different cultures while shooting or promoting a film. I love to immerse myself while traveling, so this career allows me to spend a few months at a time in different places, where I’m able to experience the life as an actual resident and not only a tourist.

If there were one previous role you would like to revisit, which would it be and why?
IVANA: While I’m very picky with my work and can always see room for improvement, I seldom want to go back to it once it’s been finalized. Each role informs a time of my life, or belongs to a specific moment in time where I may have gone through certain things or lived certain experiences, so I associate them with little pockets of memories in my life.

Do any of your characters and the situations they find themselves in ever leave a lasting impression on you?
IVANA: Most do, yes. Every film, every character is an experience that opens my mind and teaches me a lesson: whether its an actual skill, a challenge that I had to over come, a connection that I made. THE SHANNARA CHRONICLES and Eretria, for instance, encouraged me to learn more about exercise and a healthy lifestyle, which I’ve taken into my life and continued to pursue outside of filming.

Do you find any of you character’s habits manifesting in your own life? Like what?
IVANA: Funnily enough, it happens. You end up taking a little bit of the character into your life while you’re shooting it. It’s an inevitable habit — at times you find yourself so at ease and engrossed with this person you’re creating that some of their ways end up popping up in your normal behavior. On set for SHANNARA, for instance, I’d find myself eating with my hands during lunch breaks, which is something I’d never do but I guess that was a glimpse of Eretria’s wilder side creeping within me. Or I’d say things that were very much her style of wording, but sounded nothing like something I’d normally say.

Has there been any great advice you have gotten about working as an actor?
IVANA: Guillermo del Toro told me that a “good instinct” is one of the most important traits an actor can have. Everything else you can learn or work on — but instinct is innate and so imperative.

What advice would you offer to other upcoming and aspiring actors?
IVANA: Acting is not an easy craft. You’ll never be happy if you expect instant success – this job is a marathon, not a sprint. So if you’re in it for the love of the craft and are willing to accept that it’s not going to necessarily be easy or quick, then you’ll manage well. Otherwise, you’re probably in for a big disappointment.

At a time when women’s voices are rising to be heard and respected around the country and world, what do you recommend your fans do to lend support in that endeavor?
IVANA: That’s a tough question. I believe in equality for everyone and whatever those avenues are to help raise awareness on these issues, I think we need to explore them. If we don’t talk about things, nothing ever changes. So don’t be afraid to speak up, if you feel it is the right thing to do.

Do you have any other upcoming projects that you can share that fans should keep an eye out for?
IVANA: THE SHANNARA CHRONICLES premieres October 11th on Spike!

To see what further adventures Eretria has in Season 2 and if and when she will be reunited with Wil and Amberle, be sure to tune in for the Season premiere of THE SHANNARA CHRONICLES on Wednesday, October 11th at 10:00 p.m. To see what also is upcoming in Ivana’s career, you can follow her on Twitter @ivanabaquero_