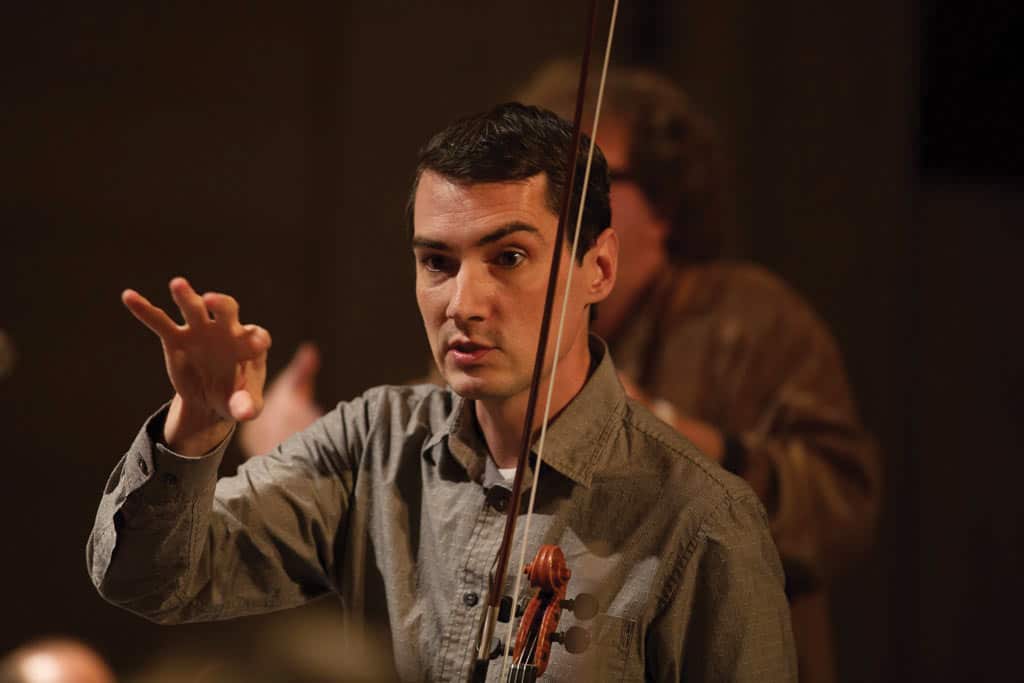 EXCLUSIVE : From THE LAST JEDI to CLIVE DAVIS: THE SOUNDTRACK OF OUR LIVES: Shining The Spotlight On Composer Paul Henning

Driven to share his musical prowess and innovation, composer Paul Henning has pursued a life of music in all its forms through live performance and across the television and film landscape. With decades of experience and a resume consisting of some of the most celebrated films and television shows, Paul ranks as a top tier composer. In an exclusive interview, Paul shared a bit of his remarkable journey and the insights he has gleaned along the way which helped him succeed in the ever fluid world of entertainment composition.

You have been composing and performing as a violinist on a large number of film and television shows for quite a few years and yet you also still work with various live orchestras and also just released your own album. What was the initial appeal of composing for a visual form of entertainment versus composing for strictly audio performance and audiences?
PAUL: I’ve always loved going to the movies, and I first became fascinated by how music worked to picture when I heard Alan Menken’s scores for the Disney films “Aladdin,” “Beauty and the Beast” and “Pocahontas,” among others. I loved seeing how music could change scenes, affect emotion and uplift films. I started listening to film soundtracks and decided I wanted to work in film music in addition to live performance.

How did you get your first chance to compose and/or perform on a film or television show?
PAUL: As a composer, my first feature film score was for an independent documentary called “The Town That Was.” I had met the directors while I was a student at the University of Southern California, and they thought of me six years later when they made their film. As a violinist, my first large studio orchestral session was for the movie “Fat Albert.” I had been recommended to the orchestra contractor by the orchestrator for the film, who had heard me play violin.

What was the transition from live performance to composing for film/television like for you?
PAUL: There hasn’t been a transition per se as I still do both. I perform live in concerts and at recording sessions, and I recently composed a documentary score for “Foreman’ about legendary boxing champion and salesman George Foreman. It was just released on Epix.

Your go-to instrument seems to be the violin. What other instruments do you play and what draws you back to the violin so frequently?
PAUL: My first instrument is piano, which I performed on my solo album, “Breaking Through.” I also play flute, but do not pursue it professionally. People in L.A. know me primarily as a violinist, and that is how I’m hired most frequently. Most orchestras for recording sessions consist of 24-30 violinists and only 1-2 pianists. The odds are better as a violinist.

When you compose for a film or show, what instruments do you like to use or rely upon to create specific sounds?
PAUL: I tend to gravitate towards strings and piano. “Foreman” also makes use of brass, a rhythm section, percussion and electronics. I am completely comfortable writing for full orchestra and have worked extensively as an orchestrator and/ or score proofreader for other composers, including John Williams.

What was your favorite part about working on shows like BATES MOTEL, AGENTS OF S.H.I.E.L.D., AGENT CARTER and PERCEPTION?
PAUL: I’ve played violin on many TV shows, and the pace at which they record is significantly faster than film. The orchestra needs to record an entire episode of music in a single, three-hour session, often barely making it down to the last minute of time left. The challenge of sight-reading that much music, and trying to nail the music in one or two takes, is fun.

You also worked on AMERICAN IDOL, what was that experience like?
PAUL: For AMERICAN IDOL, I did music arranging. I would get called to create horn or string parts for artist performances. I would have a chord chart and a rough pre-recorded vocal with the contestant singing with the rehearsal pianist. I would create the band arrangements from those recordings. It’s something I really enjoyed doing.

Then on the film side, you have worked on some fantastic film franchises including: “Maze Runner,” “Maze Runner: Scorch Trials,” “Furious 7,” “Fate of The Furious,” “Star Wars: The Force Awakens” and “Rogue One.” What were those experiences like for you?
PAUL: I have always loved playing on studio orchestra sessions. Some are very challenging and fast paced, and others are very slow, with many changes coming from the director and composer. You show up each day, not having any idea what music you’ll be playing. The film is often projected behind the orchestra as you’re recording, so you can see it many months before the rest of the world. Often, the visual effects are not completed at the time of scoring and so you see very rough outlines of the CGI in many scenes. It is fantastic to be playing new music every time you are hired for these sessions; music that will be heard around the world and immortalized in the film’s soundtrack.

You also most recently worked on the documentary “Clive Davis: The Soundtrack of Our Lives.” What drew you to that project?
PAUL: Chris Perkel, who directed “The Town That Was,” reached out to me. He had been working on “Clive Davis” and thought of me for the score.

What did instruments you use to draw out the emotional scenes involving Whitney Houston’s part of the story in “Clive Davis: The Soundtrack of Our Lives”?
PAUL: I used strings and piano, my go-to combination. This was a very difficult sequence of the film to get right. I tried to capture both the sadness and tragedy of what had happened, but at the same time honor the incredible voice and music Whitney left behind.

What has been one thing you haven taken away from your experience working on “Clive Davis: The Soundtrack of Our Lives”?
PAUL: I learned how to take feedback from multiple sources and how to incorporate a little bit of everyone’s ideas. Be it the director, the producer, folks involved in the production, or Clive Davis himself.

What would you like readers to know about that particular project that may not be obvious just watching the film?
PAUL: Clive Davis has had an amazing career, which is obvious when you see the film. Although the film does touch on it, you don’t see how hard he works behind the scenes to promote his artists and get their albums out there. I got the opportunity to write original music for a documentary about the man who has been defining pop music for decades. What a treat!

How does it feel to complete a project that viewers really respond to?
PAUL: I often don’t know what will have a legacy and what won’t when I’m working on these projects. I knew that “The Force Awakens” would do well, and I had been working on the score preparation for almost a year before the film came out. To see the incredible response after it opened was wonderful. On a similar note, every time I hear “Let It Go” from “Frozen,” I think back to the recording session at Warner Brothers, and what it was like to perform on that score.

At this stage of your career, what do you think you have learned from the amazing variety of projects you have worked on?
PAUL: I have learned that no matter how long your resume is or how impressive your credits become, you are still only as good as your last job. You have to keep your game up, so to speak, be it playing or composing. I’ve also learned that as a freelance musician you always need to be looking ahead towards the next opportunity, even when you’re working on top-tier projects.

Are there any cool perks of where you are in your career right now?
PAUL: I get to make a living entirely in music, and I do such a variety of different jobs in the field. A given day might include working on a “Star Wars” score for John Williams, then playing violin on an episode of FAMILY GUY and working on a composing job in the evening. I’m incredibly fortunate.

Do any of your projects ever leave a lasting impression on you? Like what?
PAUL: I will probably always remember working with John Williams’ pencil sketches over the past two years. I am often one of the first people in the world to see what he has just written for a new “Star Wars” scene, many months before the rest of the world hears his music. He is a true genius and national treasure.

Has there been any great advice you have gotten in working as a performer or composer?
PAUL: Yes, be the person who shows up to events. Living somewhere like Los Angeles, it is often very difficult to get people to show up to events or parties. Traffic is terrible and you are basically giving up an entire evening to attend an event. But always be the person who shows up when you can. You never know when you’ll be remembered later down the road.

What advice would you offer to other upcoming and aspiring television composers?
PAUL: You’ll need to learn how to do 4,000 jobs. Especially early on. You won’t have an agent yet, so you will need to negotiate your own wages and conditions. You won’t have an attorney, so you will need to be able to understand 10-page composer contracts, or hire an attorney to read them. The list goes on and on. Basically, you will have to embrace the fact that you will be winging it on many occasions. Also, as a young composer, I had a vision of a linear(rising) career that would just somehow take off when the right moment came. The reality of my time in Los Angeles has been a blend of both great successes and disappointments. The actual career path I’ve had looks more like an earthquake seismograph rather than the rising line I had pictured.

What do you consider to be one of your proudest accomplishments as a composer?
PAUL: I would say that my proudest accomplishment has been finishing and releasing my solo album, “Breaking Through.” I wrote music that reflects a spirit of optimism. It represents a positive and nostalgic musical portrait of this country and its vast, beautiful landscapes.

Do you have any other upcoming projects that you can share that fans should keep an eye out for?
PAUL: I’m really pleased about “Foreman,” which just came out. As a performer, I recently played on “The Fate of the Furious” and “Baywatch.” As an orchestrator and proofreader, I have been working since September of last year on the upcoming Star Wars film, “The Last Jedi.” I also really enjoyed floating thoughtlessly in my sister’s swimming pool this summer. It’s been an exciting and busy year!

With a prolific number of film and television projects, Paul’s amazing work is sure to grace your television screen or movie screen soon in the future. In the meantime, be sure to check out “Clive Davis: The Soundtrack of Our Lives,” which is available now, which showcases his work beautifully, and keep an eye out for “The Last Jedi,” which will be released December 15, 2017.