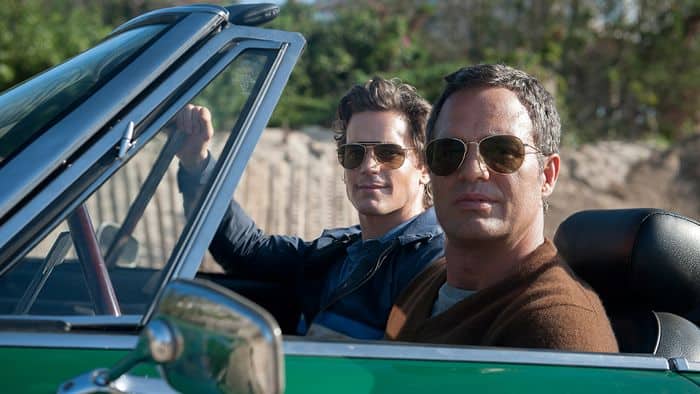 HBO’s THE NORMAL HEART is not only a great TV movie, one of the best the pay-cable network has made in years, and that’s a high bar, it’s also an important story that everyone should know about. This moving, frustrating, beautiful film tells the based-on-truth tale of gay rights activists in the 1980s fighting an epidemic that the government doesn’t want to acknowledge or investigate. It’s a dark chapter in our history, and only by remembering it can we try to prevent such a thing from happening again.

The picture of the gay community in New York City at the time is an interesting one, certainly something I never learned about growing up, and sex means something different to them than to most people. They fought hard for the right to love whoever they want, even if they don’t have legal protections that straight people do, and they see giving up this right as taking a step backward. Even when it becomes likely the virus is spread through sexual contact, many wonder if that’s a lie spread to tear them down. These are people who won a war but still justifiably feel persecuted, and can’t bear the thought that they might be pushed back into the past.

Because of this, they work against their own interests. As Dr. Emma Brookner (Julia Roberts, August: Osage County) pleads with them to stop screwing, many use the meetings to raise awareness as hookup spots. It’s a very slow crawl to even convince those affected that they must do something, let alone the powers in charge. If the gays won’t help themselves, what chance do they have of anyone else helping them?

The main character is Ned Weeks (Mark Ruffalo, The Avengers), an asshole writer who can’t keep his big mouth shut. He has earned the ire of many of his fellow homosexuals by complaining about how their rampant sexual activity prevents them from finding love, the one thing he desperately wants. But he also has friends, and once they begin falling ill to the mysterious “gay cancer,” he is convinced something must be done and begins a crusade to do so.

Along the way, Ned meets and falls in love with a New York Times reporter named Felix Turner (Matt Bomer, White Collar). Felix is supportive, but not part of the campaign, giving Ned a much-needed life apart from his work. As Ned’s colleagues, including good-looking, amiable Bruce Niles (Taylor Kitsch, Friday Night Lights), abrasive and inquisitive Tommy Boatwright (Jim Parsons, The Big Bang Theory, reprising his role from the stage production), and government employee who doesn’t want to make waves Mickey Marcus (Joe Mantello, who played Ned on Broadway), grow exhausted with Ned’s public rants, Felix is the only chance Ned has to calm down.

Which is why it probably won’t surprise you when Felix catches the disease.

THE NORMAL HEART, based on the Tony-winning play by Larry Kramer and directed by American Horror Story’s Ryan Murphy, is a very personal telling of the crisis. Through Ned, we see loved ones hurt and dying, feel the fear that overtakes him, and the desperation that he has to stop the virus. We experience his pain when his brother, Ben (Alfred Molina, Spider-Man 2), tries to help, but just can’t accept Ned as his equal. We connect with the horror and compassion, loving Ned even through his abrasiveness. Anyone not emotionally affected lacks a soul.

The sprawling cast, which also includes Jonathan Groff (Looking), Denis O’Hare (True Blood), Corey Stoll (House of Cards), Stephen Spinella (Milk), BD Wong (Law & Order: SVU), Finn Wittrock (Masters of Sex), Adam B. Shapiro, Danielle Ferland, and more, shows us many different individuals, and how each copes in a different way with the events. Some have small roles, but Murphy deftly lets the actors shine through, each conveying a lot in a limited amount of time, showing us many varying individuals. Not everyone agrees, but the variety of opinions and personalities are why THE NORMAL HEART feels so authentic.

I do think the opening of THE NORMAL HEART may hurt the film’s impact, immediately turning off conservatives by the open displays of gay love and promiscuity. These are the people who most need to watch, to begin to see the humanity and suffering they’ve ignored or ignorantly been disgusted by. But it also succeeds in dropping us into a world and mood that is merely the starting point of the story, giving the script a foundation to start from before it turns dark. Stick with the movie for ten minutes, and you’ll start to have your eyes opened.

THE NORMAL HEART is a moving masterpiece, a triumph for HBO and all involved, and one that will not soon be forgotten by any who witness it.

If you missed last night’s premiere, please make sure to catch a rerun, as the network should be playing it often for some time to come.