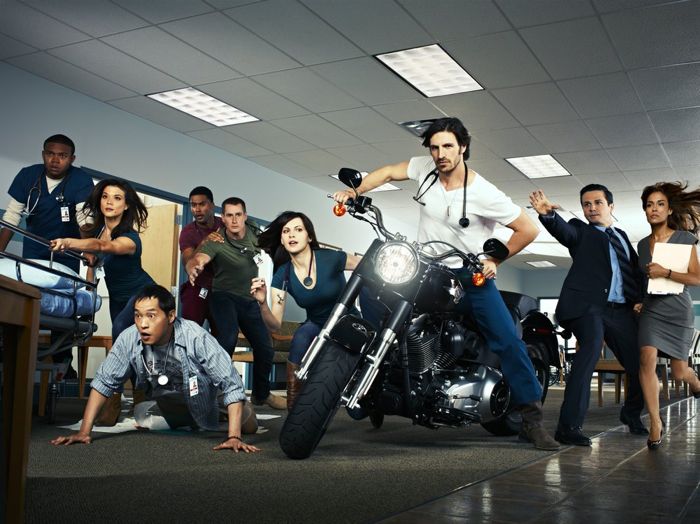 NBC’s new medical drama, THE NIGHT SHIFT, will feel awfully familiar to regular TV viewers, and not just because one of its stars has already been a main character in a medical show. It’s just like ER and Grey’s Anatomy, albeit not nearly as well written and with much weaker characters. When a series is popular, studios will strive to copy it to capture that popularity. But this series proves just how hard it is for lightning to strike multiple times in the same vein, making it pretty much a waste of time for all but the most bored summer viewers, a descriptor which should apply to no one, given the plethora of excellent options on cable and streaming.

THE NIGHT SHIFT has a large ensemble of varying characters that are familiar types. TC (Eoin Macken, Merlin) is a brilliant surgeon struggling with inner demons that make him a man hard to get along with. His ex-girlfriend, Jordan (Jill Flint, Royal Pains), is now his boss, and is the only one with the slightest chance of controlling him. There’s a money-obsessed administrator, Ragosa (Freddy Rodriguez, Six Feet Under), and a couple of fresh, new interns, Paul (Robert Bailey Jr., The Happening) and Krista (Jeananne Goossen, Alcatraz). In short, there’s no one original in this group.

The intern angle is one that is not going away any time soon in such shows. After all, they are a part of the staff, just as surgeons and nurses are, and so will be seen over and over. But can we not have a scene of them being pranked and another scene of one of them green enough to be shocked by a common malady? These are overused tropes, and we already inherently understand this is part of the job without having to be shown it so blatantly.

The administrative side is one not brought up in every hospital-based series, but it’s common enough that it isn’t new. I guess the writers have an opinion they’d like to express about how medical care is more important that paying bills, with the money guy demonized. But what discerning viewers should know is that the world is more complicated than that, and a sympathetic accountant who tries to find a balance would make a much more welcome, interesting part than a cold villain. Sadly, THE NIGHT SHIFT chooses to cast the latter.

Of course THE NIGHT SHIFT has a TC. It has to have a flawed leading man; that’s practically a required rule for all new shows at this point. But does his ex-lover, who clearly still cares about him, have to interact with him constantly, too? Does THE NIGHT SHIFT have to check off every single conceit of the genre, leaving no stereotype alone? The pilot is downright painful for these reasons.

One of the other main characters, not mentioned above, is secretly gay, something that comes out late in the pilot. THE NIGHT SHIFT makes a big deal of this, like it could hurt the guy’s standing if he admitted to being homosexual, even if those closest to him don’t care. Admittedly, this character, like many in the show, are military, and he’s in a particular part of the armed forces that hasn’t really integrated much at all yet. But still, this is 2014, where acceptable is becoming the norm and the issue seems tired, so while there is still discrimination that should be fought in the real world, it seems ridiculous to be played up this way on a TV show, something we’ve already seen before many times over. At last take a new angle on it, taking into account society as it currently is, not as it was a few years ago.

There are quite a few elements in THE NIGHT SHIFT that are tired. Jordan wants everyone to switch over the tablet computer records, which is played up like an innovative fresh concept. Grey’s Anatomy already did that over a year ago. A patient in the first episode has an unborn twin living inside of her, a case so rare, she’s going to get a free surgery to remove it. Except, that’s already happened on other medical shows, too, so how rare can it be? Either the gluttony of such dramas has reached a point where there is nothing new to say, unlikely, given how Grey’s and Nurse Jackie continue to impress week after week, or THE NIGHT SHIFT is just too lazy to find untouched ground, making its existence completely unnecessary.

There’s also a sense of forced urgency. Jordan tries to protect TC by saying he’s not replaceable. Really? They can’t find any other good doctors in the entire world that can do what TC does, yet he’s in a little place, barely acknowledged for his skills except by his co-workers? And when arguing about keeping the hospital running, it is claimed there’s not another center in ten counties to help out the population. Yet, the show is set in San Antonio, which has lots of different hospitals. It’s a major city, for goodness sakes! This just doesn’t make sense.

I do like the cast, which also includes Ken Leung (Lost), Daniella Alonso (Revolution), JR Lemon (Shadow Love), and Brendan Fehr (Bones, Roswell), but anyone can put together a decent ensemble at this point. What’s more impressive is using them well, which THE NIGHT SHIFT fails to do. Were this summer 2006 and the warm months were filled with reruns and reality shtick, this series might work. In the modern age, there are just too many better choices around.

THE NIGHT SHIFT premieres Tuesday at 10 p.m. ET on NBC.