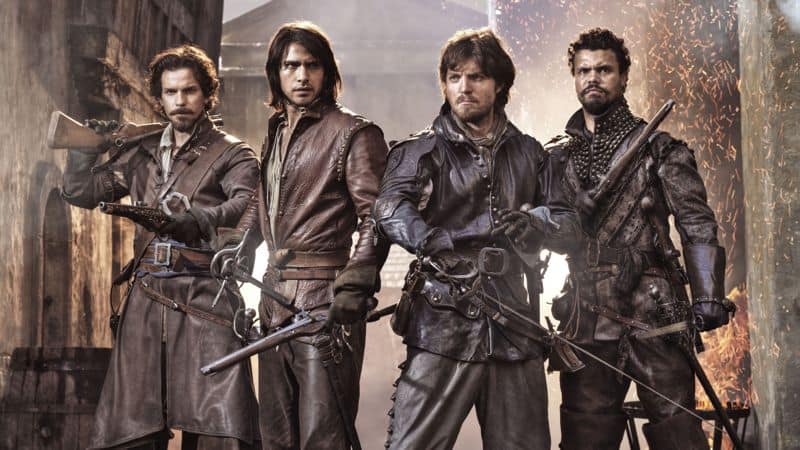 BBC America will begin airing the British adventure series THE MUSKETEERS this weekend. Yet another retelling of the classic Alexandre Dumas novel, it’s the story of how the bold D’Artagnan (Luke Pasqualino, The Borgias) meets up with a trio of swaggering swordsmen, eventually joining their noble company. It’s a familiar enough tale, and THE MUSKETEERS doesn’t stray too far away from the source or spirit, at least initially.

The opening of the pilot, “Friends and Enemies,” is about as cliché as anything I’ve seen in years. It begins in the rain with stock dialogue that could have been taken from anywhere and a showdown that a child could predict the outcome of. It’s not a good start, and may turn many off.

But stick with the hour and you’ll start to see something several notches better than that. True, there are a number of scenes throughout “Friends and Enemies” that are trite and cheesy and dumb. However, there are also several moments of actual character development and excitement, with some energetic action sequences. This pilot is a blend of a series I would never bother with and one I’d be a stalwart fan of. Which will win out?

According to critic reviews from England, where the first season has already aired and a second has been ordered, by week three THE MUSKETEERS gets good. This is pleasing news, indicating that the writers likely build upon the things that work, ditching those that do not.. Unlike, say, the recent drama Atlantis, which is a totally schmaltz-fest, there are some neat elements tucked into this installment, and nurtured, it could be something cool, a new popcorn series set hundreds of years ago in France, though thankfully performed in English, with accents, of course.

The cast seems pretty solid. The three leads, other than D’Artagnan, are Athos (Tom Burke, The Hour), the leader, Aramis (Santiago Cabrera, Heroes), the lover, and Porthos (Howard Charles, &Me), the schemer. The chemistry in the group is terrific, and their witty lines tend to be some of the best of the show. Their established bond and the arc of taking D’Artagnan under their wing works well, and each is featured about as much as the others, providing a balanced ensemble.

THE MUSKETEERS immediately establishes some good arcs on which they can build a season. D’Artagnan’s initial quest is complete in “Friends and Enemies,” and I think many viewers are bored of a procedural format. Luckily, this program is a serial, with multiple plot lines that will take many weeks, or even years, to play out.

The central villain, Cardinal Richelieu (Peter Capaldi, the next Doctor Who), is a Jafar-esque figure, advisor to the malleable King Louis (Ryan Gage, The Hobbit films). He is undermining the monarch and stealing power for himself. The titular heroes are in his way, and so he is determined to get rid of them, more for his own goals than any personal vendetta.

Capaldi plays the role with the right mix of slime and intelligence. He does seem a little too obviously nefarious in some scenes, but THE MUSKETEERS is more light and broad than dark and heavy, so he gets away with it, cartoonish in an acceptable manner. He’s definitely evil, no shades of gray here, but Capaldi is convincing in the role, almost making the part believable.

And there are women, too, because sex sells. Aramis is in bed with someone that likely will get him into trouble right off the bat, while D’Artagnan also catches the eye of a woman who is spoken for, Constance (Tamla Kari, The Inbetweeners Movie). Toss in Milady (Maimie McCoy, The Libertine), who is more than what she first appears, being connected to one of the leads and working against him, and there’s a larger than expected number of females for a show that is mostly made for men, revealing the modern sensibilities of those who make the series.

As one might surmise, I have mixed feelings about this pilot, but am optimistic about the chances of the show being worth watching. It’s a fun romp in an historical setting, and should be enjoyable enough for most audiences. THE MUSKETEERS airs Sundays at 9 p.m. ET on BBC America.