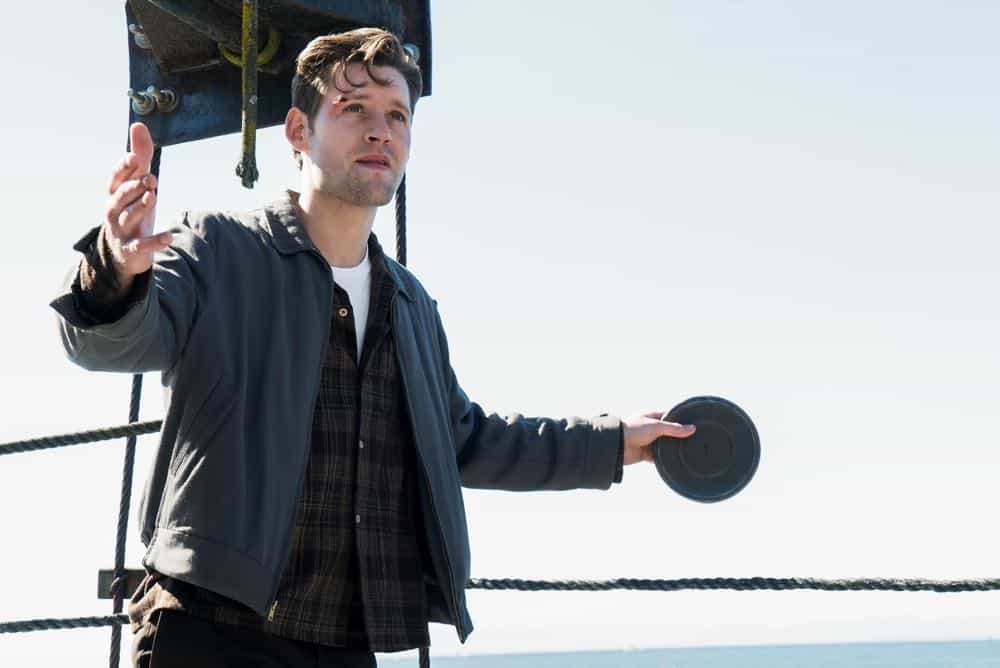 Last seen at the end of Season 1 taking a boat to safety, Joe Blake (Luke Kleintank) appeared to be a changed man intent on being the man that Juliana Crain (Alexa Davalos) believed him to be. But is he truly? Who will Joe choose to be now that he is out on his own without Juliana’s steadfast guidance and trust in his innate goodness in his soul. In a press interview from the set, Luke Kleintank is cautiously optimistic about Joe’s path and renewed sense of purpose in life beyond the Reich.

It appears that there is a new relationship brewing between Nicole and Joe. How far does it develop?
LUKE: I don’t know because it’s so important. It’s kind of a new thing. I don’t know really how far along it’s gone. It’s just so brand new. It’s developing.

Bella had mentioned that your character started Season 2 kind of heart-broken. Could you elaborate what he feels so heart broken about?
LUKE: A lot of things are things he had to do in Season 1. The people he had to betray. The people he killed. The loss of Juliana in his mind. Yeah, all of those. He’s heart-broken.

Does he believe she’s now dead at the start of Season 2?
LUKE: I think we would assume that. Yeah, of course. Because he escaped and the resistance would have been on her tail.

But he seemed in the Season 1 finale to kind of say to Juliana, “You’ve changed me. Like I’m a different man.” Do you think that he truly thought that?
LUKE: I think she changed him. I think she changed his outlook on certain things in life. But I think still he’s a young guy who is a Nazi. That’s the world he grew up in so I think she just opened his eyes to what it was supposed to be. To being a better man, really. Yeah, and I think he still thinks that doing the right thing by the Reich is, could possibly be a good thing but I don’t know how much he believes in that. I think he’s just confused really. She opening his eyes.

What fascinated you the most about the character because there’s so much meat on the bone to play?
LUKE: The fact that he’s ubiquitous. We don’t know who he is. I’m stretching to find out who he is as a guy, as a young man, so. I say this all the time, I’m still trying to figure myself out in my life, so we kind of met it each other in similar times.

Would you want to know if they told you where the arc was going at the end day so you could go to it or not?
LUKE: No. I like the surprise. Because then it takes away the surprise for me. I know where it’s going and I don’t know, I think I’d over think it.

In Season 2 we get to meet Joe’s father, played by Sebastian Roche, and you two have worked together before, right?
LUKE: I did a film with Sebastian. He played my father in a film called ” Phantom Halo” before this, so I had recommended him for the role. So yeah, me and him go way back. Love it though. Yeah, we joke all the time.

Can you share anything about Joe Blake and his father?
LUKE: I wish I could because it’s such a pointed thing to his character. I mean it really forms everything he does in Season 2, so I wouldn’t want to tell you too much. I’ll tell you that you will meet his father and yeah, he’s an important man and that throws Joe into the lion’s den. He has to deal with that, live with that. All the emotions of the scenes when we first meet on screen. It’s scary as hell for him, but it’s also really tempting.

How does Joe feel towards going back to John Smith (Rufus Sewell) for the second season? Is he going back to him? Is he trying to elude him? What’s kind of his hopes in that regard?
LUKE: I don’t think he’s trying to go back to him. I think there’s just, he initially wants to see who this man is that he never met in his life, his father. I think that Smith has always been, there’s so many things that I can’t give away. You’ll find out. In the beginning of the season, he’s not trying to elude Smith. I think he’s pissed off at him for making him do the things that he had to do. I think Joe doesn’t believe he had to do these things. He asked for Juliana’s safety. Smith didn’t grant it. And Smith pretty much threw him to the wolves.

Is he fearful?
LUKE: Of course he’s fearful. He’s very fearful. But you’ll see in this season where he gets a little cojones. So he’s not as fearful.

What was the biggest challenge for you getting into this character, even back in season one, and now going into Season 2?
LUKE: Really, to me, the accepting this world — being a Nazi. It’s really hard to separate yourself from that. It’s hard for me just as an individual to put on the swastika and see the things I have to see. Accepting that and kind of trying to believe in that to a certain respect, that’s really hard for me. That’s the main thing for me, really.

Are we suppose to believe that your character is a hero in the second season, or is he somebody just in search of himself?
LUKE: He’s in search. Mainly, he’s finding himself. I think he has the potential of being a great hero. I think he’s slowly finding that within himself. I think the world is finding him at the same time, in the same respect. They’re meeting in nice place.

Can you talk about working with Bella (Heathcote)? Are you enjoying that experience so far?
LUKE: We’re having a blast. It’s nice working with new people, but, at the same time, I miss [the other actors] so much as well because I don’t really get to work with the key players I worked with last year. We are all separated this year. My character being in Germany most of the time, I’m introduced to new characters. Working with Bella and Sebastian, everybody’s been great. Tthey’re talented people.

What storyline were you most excited to explore in Season 2?
LUKE: Me and Sebastian Roche, because we worked together before. We played father and son. I think that dynamic, it means a lot, because in Season 1 we don’t really know what Joe’s doing while he’s doing what he’s doing. They mention his father. It’s kind of this ambiguous thing that is floating around that we don’t really know about. It really defines him in Season 2, his father.

Does he eventually get word of some of the other characters he had interacted with last season? Or is he completely separated and has no idea?
LUKE: Oh yeah, he does.

So there’s some interaction with the other original characters at some point?
LUKE: It’s really separated but there is the talk of it, the characters. It’s a “butterfly effect” is how I was presented with Season 2. Everyone affects everybody else, even if they don’t know they are doing it. They are all connected.

What about those film reels? They were so big in Season 1. Are they coming back to haunt Joe again?
LUKE: Oh yeah, they do. Especially in the final episode.

To find out what further twists and turns await and if Joe and Juliana’s paths are fated to cross again, be sure to tune in for the release of THE MAN IN THE HIGH CASTLE Season 2 on Friday, December 16th available exclusively on Amazon Prime.