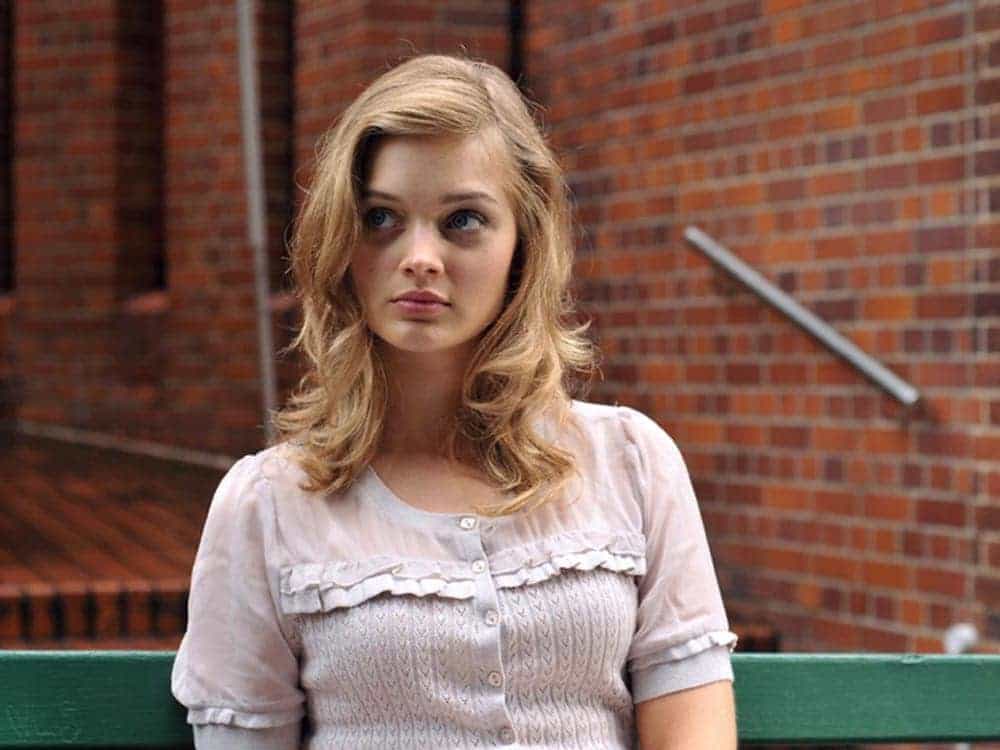 Playing what first appears to be a woman of mystery, Bella Heathcote joins the Amazon series THE MAN IN THE HIGH CASTLE in Season 2 to turn Joe Blake’s (Luke Kleintank) world a bit upside down. In a press interview from the set, Bella Heathcote introduces her new character and what motivates her to pursue Joe.

You are playing a new character this season, so can you give us a good quick rundown of who she is, and who she’s going to be sharing stories with?
BELLA: From what I can gather, my character Nicole’s super privileged. She grew up in this uber-Nazi society. Wealthy. She’s a film maker, I think. She meets Luke’s character, Joe Blake, and he’s unlike any of the guy’s she’s grown up around, or any of the guy’s that she spends time with. I think she’s really taken with him because of that. [Laughs] I feel like I just spend all my time just trying to basically seduce him against his will.

We heard that your character might be a Nazi spy.
BELLA: [Laughs] It’s so funny, because I feel like there’s been times in the season where I’m like, “I am. I’m not. I am. I’m not.” As far as I know, I’m not, but it seems to change. That’s the thing about the show. It does change a lot. I’m going to say I’m not, but I could be wrong. It’s so funny, because there was a script at some point where I was talking a lot about Nazi ideals. I’d been going around being like, “Yeah, she’s [this].” But essentially she’s born into the Nazi world, but she’s second generation and all the scenes prior to that, I’ve just been talking about the environment. All my friends seem to be party kids or hippies, you know? Just like flower children. I think that basically they children who are really privileged, an because of that, it affords them a certain level of freedom that they wouldn’t have had. They are wealthy, and I think they just push it as far as they can. Then, there’s one scene which isn’t in the script anymore, where I was really going on about the purification of the race. I was like, “Whoa, I did not see that coming.” [Laughs] That got scraped, so I don’t think I’m a Nazi.

Were you looking to be on the show, when the opportunity came along?
BELLA: It’s funny, because I had seen the first season, and I didn’t know where it was going. I was excited when the character came up. Yeah. I was definitely looking to play something new. She’s very different to anything I’ve played, so it’s been really fun in that sense.

What kind of films does Nicole make? Are they propaganda films?
BELLA: They’re not. I think she seems to make a lot of — the environment is her main focus, but it’s funny. I don’t know if she thought of herself as a propaganda filmmaker. She made a couple, but it was never her intention. I’m sure given the constraints of the society that she lives in, she really cannot make that many crazy avant-garde films. As far as I know, she/I haven’t done any wild propaganda.

How are you enjoying working with Luke?
BELLA: I’m loving it. It’s funny, because he’s so subtle. I watch him, and I watch the dailies, or I watch the episodes, and he’s just beautiful on screen. So I feel like I’m learning a lot from him actually. Meeting him, it’s been great working with him.

What was the biggest challenge for you coming into this world and playing this character?
BELLA: Coming into this world. I think because it’s so well established … Season 1 was so great, and I just felt like I was going to come along and screw it up. Also playing a German woman, I think the accent was a big challenge as well, because it had to be German-ish, but not alienating. That’s been interesting to find that balance. I think the first two episodes, I was over-German. It was accurate, but it felt quite cold, so I had to dub those. Then I found a different accent, which is more like actress Alexandra Maria Lara. I ended up watching a bunch of her interviews. She sounds German, but she’s almost got an English lilt. She feels very warm, so I’ve just been like mimicking her a lot.

What are the odds you’ll be back next year if the show gets picked up for Season 3?
BELLA: [Laughs] I hope strong. I’m hoping.

Rufus [Sewell] had mentioned that your characters don’t interact at all this season. It seemed interesting that she’s already so established in the Reich world that she wouldn’t interact with somebody like John Smith.
BELLA: It’s weird, because I don’t feel like [she’s] a Nazi spy or I’m really into the Nazi ideals, because none of [her] friends are. [They] don’t talk about it. It’s just like they’re born into the regime, and they’ve kind of inherited it, but they’re not really that into it. They’re just people who have their own interests. It’s kind of a bummer, though, because I would love to work with [Rufus]. I just love him in the show.

How familiar is she with what Joe Blake had gone through from Season 1?
BELLA: When I meet him, there’s a distance there. I can see that he’s haunted by something, and it takes me a while to get it out of him. It’s not something that he volunteers easily. It’s funny, because as a person, I tend to gravitate towards people who are going through heartbreak or experience tragedies. I feel like I can relate to that aspect, because there’s something there that you want to … That’s interesting, you know? That you want to help, or help heal.

Is Joe actually experiencing a heartbreak? I didn’t ever quite get the sense that he and Juliana actually had a relationship that way.
BELLA: I feel like they could have. I feel like if the circumstances had been slightly different, they would have. I mean, this is my perspective watching the first season. I felt I always was waiting for that moment when they got together, but I think that the stakes were too high, and it just wasn’t obtainable. I think he also feels responsible for what he thinks happened to her.

So he may not be aware that she’s actually doing better than he last might have assumed?
BELLA: Yeah, I think so.

What surprised you the most about Nicole?
BELLA: It’s funny, because at a certain point I’d almost pegged her as a bit of a party girl. She has a lot more heart than I originally gave her credit for.

To find out what further twists and turns await and where Nicole’s journey takes her, be sure to tune in for the release of THE MAN IN THE HIGH CASTLE Season 2 on Friday, December 16th available exclusively on Amazon Prime.