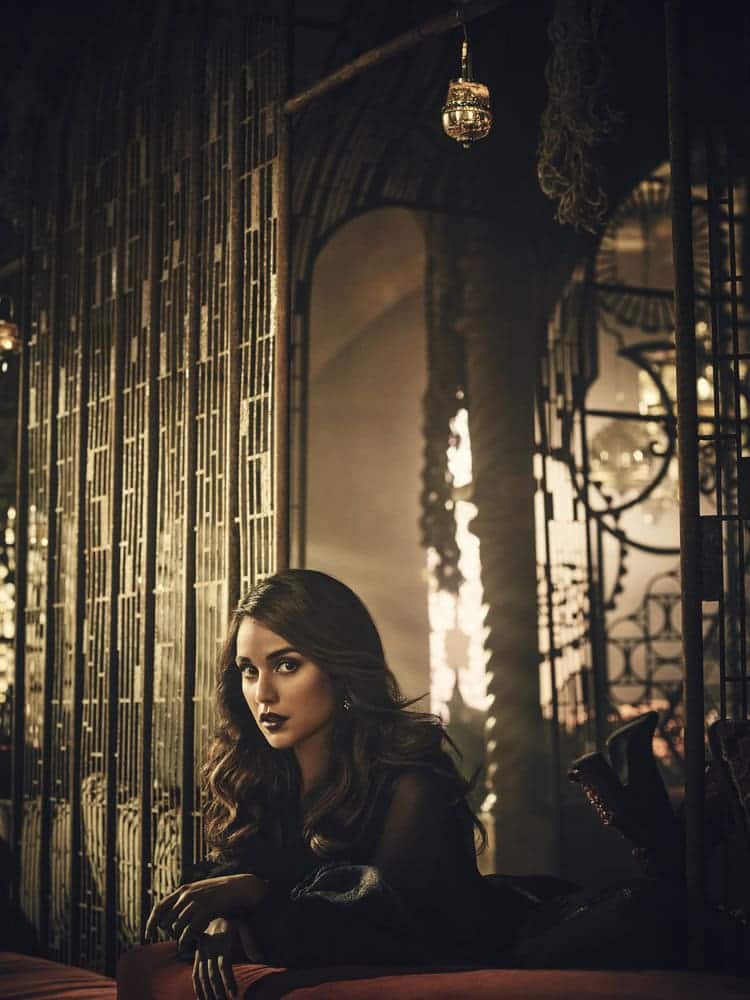 How far the characters of Syfy’s THE MAGICIANS have come. They began their long, arduous journey of self-discovery and acquiring the magical skills and tools they would need to not only navigate life, but also to potentially save an entire magical realm of Fillory from extinction.  In Season 2, things do not get any easier or less conflicted, in fact, the heightened danger only exacerbates and expands.  To find out a bit more about Margo’s personal journey and struggles she confronts, we had the opportunity to talk with star Summer Bishil, who revealed what is happening in Season 2.

In Season 2, Margo is really up in the air.  She was along for the ride almost for the first season and it looks like in the second season she’s got to make some hard decisions.
SUMMER:  She does. She does have to make some hard decisions. One of the most exciting things about Margo this year is when she begins to hold her on without Eliot (Hale Appleman), and you get to know who she is. She’s a really exciting character to play. She’s very strong, she’s never the victim, and she becomes very powerful this year. It’s been really gratifying from an artistic perspective, and also just from a visual perspective as well, just to see how she transforms physically has been really fun to play. The wardrobe is obviously very beautiful, and very expensive, and she’s obviously a very flamboyant character, so the costume has been amazing this year.

Is she going to still want to align herself more with Quentin (Jason Ralph), or with Eliot? Or does she just go off on her own?
SUMMER:  I don’t think she goes off on her own. I think she’s loyal to Eliot. I think she loves him. I don’t think a marriage is going to interrupt the bond that they share. It’s pretty impenetrable, and I think that’s established at the end of Season 1. That he is married to this woman, but it’s not the end for them. They will find a way to be together. They always will. That’s their truth. I don’t think Margo is interested in aligning herself with anyone. She’s very independent. She loves Eliot, but she can survive without him and she will.

Was Margo prepared for this entrance to Fillory and this crazy world?
SUMMER:  I don’t think she was. I don’t anybody could be. They didn’t see it coming.  That’s what we saw at the end of Season 1. They really were not prepared, any of them, and they couldn’t get the leg up. No. I don’ think she was prepared. The introduction of Fillory is going to be really exciting. It’s a new character, it’s unpredictable, it’s beautiful, and I think you’re going to see a lot of it this year.

Does it make her want to reject magical world, or does she embrace it more?
SUMMER:  I think she embraces it more. I think the one thing that Margo will never let go of is magic. I don’t she’s ever going to let go of it, and I think she’ll fight to preserve it, and to protect her right to do it. She’s endlessly intrigued by Fillory. I think that’s where she wants to exist.  It’s the chance at a more powerful, and more meaningful life I think.

What does Margo want?
SUMMER: It’s tough to talk about that, because it reveals plot points. I think she wants to stay with her best friend, Eliot. I think she wants to see how powerful she can be, and test the boundaries of her skills as a magician, and as a woman, and figure out what that means, and what that journey is to her. She’s not afraid of challenges, and Fillory is a challenge. It is the biggest challenge she’s faced. It’s more interesting than the new girl on campus to Margo. She’s not a small person, and I don’t think Brakebills would’ve ever kept her interested that long.

How does she feel about the Beast (Charles Mesure) at this point? It was really bizarre to see Julia (Stella Maeve) team up with him at the end of the first season, and that’s got to just rock their world in some ways because that’s unconceivable in all their minds.
SUMMER:  Oh, yeah.  I think she despises Julia for what she did in that betrayal. Margo’s life means everything to her, and Eliot’s life means everything to her. She betrayed her, and she cost her, her life, and her friends’ lives. I think she despises both the beast, and Julia equally.

It’s no “forgive and forget” and realign at this point?
SUMMER:  I don’t think with Margo. Not that easily.

We have the introduction, of course Reynard (Mackenzie Astin), and then we have, of course, the Beast. That’s two distinct villains that they are going to be faced with in Season 2.  Where does Margo fit? Is she going to be pursuing either one of them? Is she going to be avoiding them? How does she feel about those perceived threats?
SUMMER:  I don’t think Reynard is a concern to Margo.  For her, he doesn’t exist. I don’t even think she really knows anything about that situation. As far as the Beast, she’s terrified. She wants to survive, and she’s going to do anything to survive. That concerns Margo, because it directly concerns her. I don’t think she really cares about Reynard.

When we see Eliot and Margo again is their relationship strong? Is it fractured at this point? Where are they at?
SUMMER:  It is strong. I think it is strong. I think that’s where it left off in Season 1. She handled it like a grown woman who was still going to be loyal to her best friend, to the man that she loves, and to her, he’s her family. He’s everything to her, and I think she handled it with grace at the end of Season 1, and I think their relationship … They’re obviously going to figure out how to stay together, but I think they’re strong. They’re always strong. They evolve.

Of course Eliot gets to be King. What is Margo going to be doing? Is she going to be the power behind the King, or just hanging around?
SUMMER:  That’s one of the things that I can’t talk about. I don’t think Margo’s a character who just hangs around, or is in the shadow of any man or woman. I think it’ll be more interesting than that, but I can’t talk about how.

Are they going to actually be able to protect themselves in Fillory, or are they going to have to find themselves back at Brakebills finding some other ways to protect themselves?
SUMMER:  I think a bit of both. I think they’ll be a bit of both. Yeah. There’s definitely going to be a marriage of those two worlds this year. Every episode that comes out I’m like, “God, I would have never thought of that. That’s so surprising.” I’m surprised by the storylines. I’m surprised by where my character goes, and who she starts to engage with, and who she doesn’t engage with. It’s definitely not what you would’ve expected, because even I at the end of the season was like, “What? Where is it going to go? What’s going to happen?” and all of the theories I had in my head were wrong. Yeah, it’ll be interesting.

The Season 1 finale was a scary finale.  It was the first time other than the first episode where I went, “Dang, this is a very real world, and it’s a very scary place they live in.”
SUMMER:  It was scary. It got dark. It really went there.  That’s what I love about THE MAGICIANS. It vacillates between the dark and light in a really seamless way. The tone is really interesting to figure out as an actress. Especially as Margo, because I have to negotiate the humor, and the tongue in cheek, and the lightness of who she is and that buoyancy. Also, this year especially, the gravity that she’s experiencing, and the push and pull of those two worlds, of Fillory and Brakebills, and the pressure of survival. It’s interesting to negotiate those tones.

To see if Margo and Team Brakebills can successfully stop both the Beast and Reynard from their hell-bent paths of terror and destruction, be sure to tune in for the premiere of THE MAGICIANS on Wednesday, January 25th on Syfy.