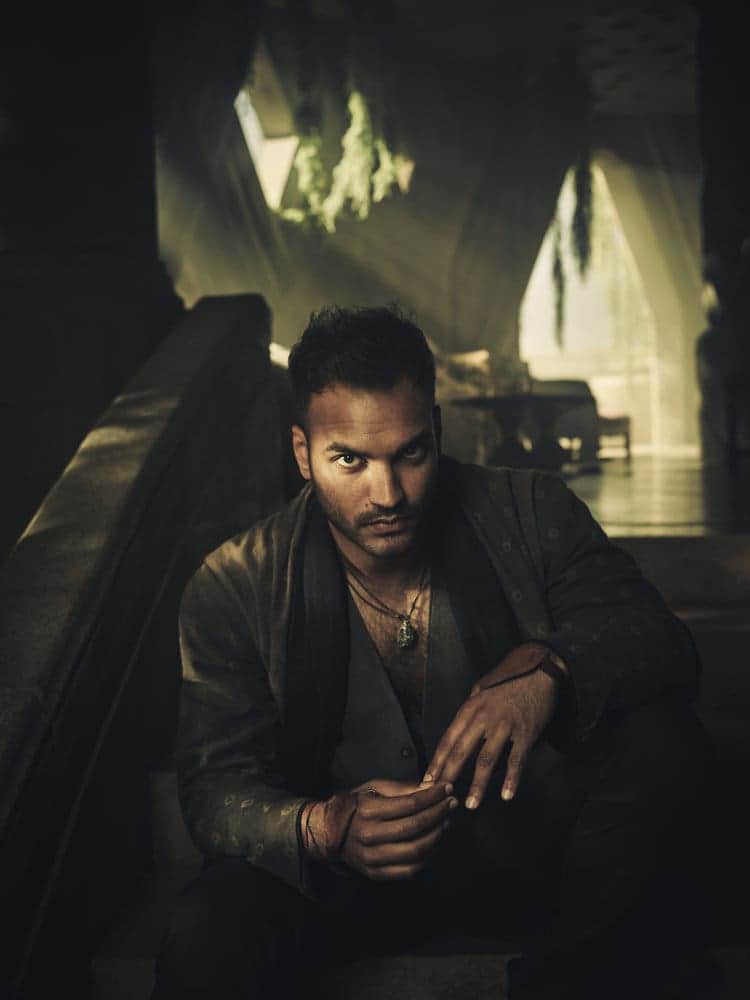 How far the characters of Syfy’s THE MAGICIANS have come. They began their long, arduous journey of self-discovery and acquiring the magical skills and tools they would need to not only navigate life, but also to potentially save an entire magical realm of Fillory from extinction.  In Season 2, things do not get any easier or less conflicted, in fact, the heightened danger only exacerbates and expands.  To find out a bit more about Penny’s personal journey and struggles he confronts, we had the opportunity to talk with star Arjun Gupta, who revealed what is happening in Season 2.

Your character Penny, looked like he was in a pretty dire situation with the loss of his hands.  I’m sure that’s a major storyline going forward next season, but how would you describe his journey coming into Season 2?
ARJUN:  I think of the undercurrent of the whole thing — I think the hands kind of become the way through which to tell the story — of what is Penny’s relationship to magic. You have someone who is very reluctantly at Brakebills, felt reluctant to be a Traveler, reluctant to be a magician period. What happens once that is taken away? What is this person do? What does he choose to do? What does he forced to do? That’s a fun … That kind of becomes the undercurrent question throughout Season 2 for Penny.

I wouldn’t think the fact that he didn’t have hands would stop him from being a Traveler.
ARJUN: Well it’s not necessarily, but magic and traveling is actually quite a different thing. That’s just a gift that he has and the ability to magic is, can he do it? How does it affect his ability to travel? He wasn’t exactly a very good Traveler. Right, until he got those tattoos on his hand. Right? Once those tattoos get cut off, what does that mean for his ability to travel? There was, as we learned throughout the season, his accuracy wasn’t great. He couldn’t take anybody. What does that change for him? I was really curious as to how this was all going to work out. It was really fun. We did some prosthetic work. There were some surreal fittings that I’ve never experienced and has been really fun. Acting without my hands was a really fascinating exercise. I don’t want to peel back the curtain too much, but we found some unique, innovative and I think, exciting ways to work around that situation.

Did they put bags over your hands so you could try to get used to that feeling?
ARJUN:  There was some … The props department – and special love to Rosie, who came up with a creative way to kind of help me experience that and help me learn that.

It takes away your independence pretty quickly and you’re totally dependent on others to do things for you.
ARJUN:  Absolutely. Penny is not somebody who welcomes the loss of independence.

So he needs a care-taker and that might be somebody he might not want in that role.
ARJUN:  Yeah. Or maybe someone he doesn’t want to give that power to.

Is it going to send him on a quest to get back his independence and find ways to operate magic?
ARJUN:  Yeah. Dealing with the hands is pretty much the immediate situation, but also dealing with the Beast.  The Beast is still out there. There’s a lot happening. It’s all happening. We don’t shy away from it. We start at 100 miles per hour pretty much. We don’t ease into this season at all.

As a viewer you’re going kind of through it a little bit as well because you’re invested in the characters and you want to wish good things for them. They go through these deep traumas and you’re like, “wow.”
ARJUN:  Yeah. It’s interesting the audience experience. Twitter has been really fascinating.  The live-tweeting aspect of it has been really fun to experience the … I hope everyone gets the chance to watch these episodes twice.  I hope they do because tso much happens. So much happens to these people.  For me, it’s great. Every episode is crazy. The stuff that we’re doing. Like I said, we haven’t slowed down at all this season. In fact, in some episodes we picked it up. Some of the stunts that I just got to do in the last week have been so fun.

Are you doing wire stunt work?
ARJUN:  I can’t tell you. Well actually I think I posted about it, so I can tell you. I have done some wire work, yes.
Super cool. Never experienced the harness like that.  Really fascinating things that it does to your body.

Do you have to tussell with your stunt people to say, “let me try that”?
ARJUN: Oh my gosh, Dan Shea, who I love and they’re really smart about not letting me do things because I would do everything, but they’re the best. The let me do as much as I can. They prefer that. Any good stunt coordinator prefers to have us do as much as we can because it looks more real. There are certain things that are just simply not safe to do.

Has Fillory, the way that they devised it and created it for the show, has it kind of blown your mind?
ARJUN:  The design elements of what the show is, is amazing. It’s out of control. We’re blessed with incredible designers. What they’re doing to Fillory. The locations that we’ve gotten to go to this year. They opened up the play book. We’ve opened up the opportunities of where we go to locations. We’ve opened up the kind of designs. Things are pushing the boundaries. With cameras, with the lights, what are we doing. It’s really exciting. It’s been really fun.

What’s up with Penny’s relationships? Does he want to isolate himself? Does Penny feel like because of his injury he’s no longer useful to his friends?
ARJUN:  Yeah. The relationships, the dynamics are going to keep changing. I think that for all of the characters they are bonded in ways they don’t really know what to do with. Their bonds are something they didn’t anticipate or desire to begin with, like Penny’s relationship with Quentin (Jason Ralph) is always going to be a big backbone of the show. Well, not necessarily a backbone of the show, but it’s a backbone of Penny’s storyline. It’s a thrill, what they have us doing this season.
It’s interesting. The way they have crafted that has been really fun to play and really exciting.

The show introduced the idea of Alice (Olivia Taylor Dudley) and Penny towards the end of the season, which could have been a one night thing. But we still sense there was still a friendship between them.
ARJUN:  I know that Olivia and I — we didn’t want it to simply be about Quentin. We didn’t want it to be just a purely revenge thing. I think, yes, that was a part of it for Alice. But I think they do genuinely have a connection. I think these two characters genuinely have a lot of respect for each other. You saw it after they slept together. Penny was the one that was like, “Listen, stop short-changing yourself. Stop dismissing your power. You are powerful. Own it.”  I think that that’s something powerful there and that relationship has ramifications through the season in am immense way.

You think they’re still friends?
ARJUN: That’s a question we’re all going to have to watch and find out.

To see if Penny and Team Brakebills can successfully stop both the Beast and Reynard from their hell-bent paths of terror and destruction, be sure to tune in for the premiere of THE MAGICIANS on Wednesday, January 25th on Syfy.