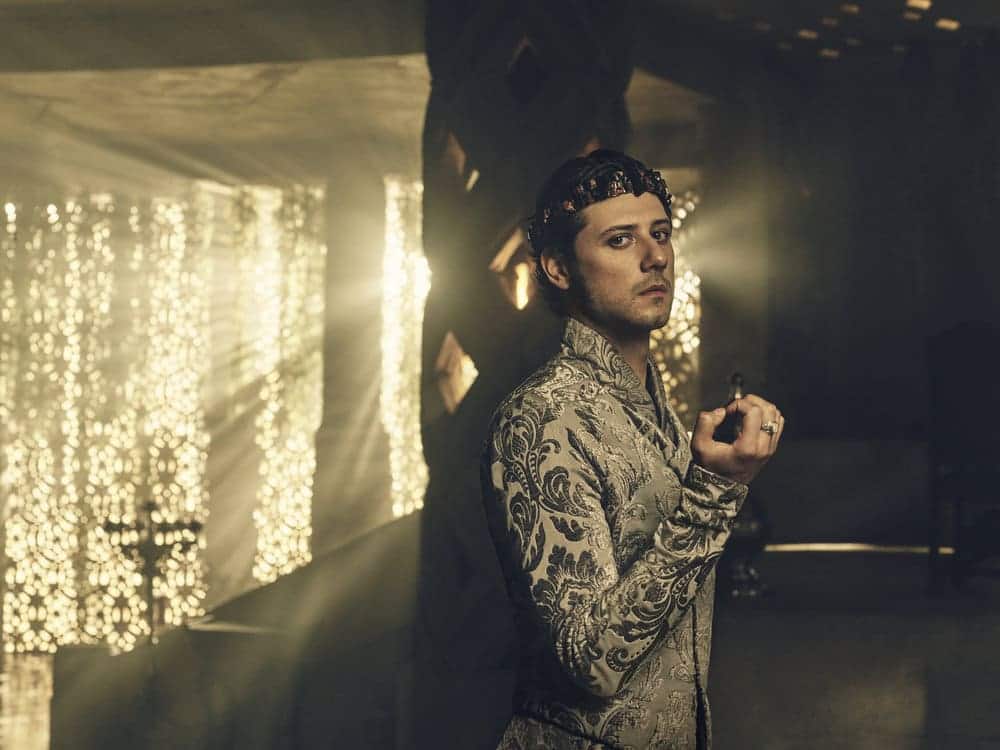 How far the characters of Syfy’s THE MAGICIANS have come. They began their long, arduous journey of self-discovery and acquiring the magical skills and tools they would need to not only navigate life, but also to potentially save an entire magical realm of Fillory from extinction.  In Season 2, things do not get any easier or less conflicted, in fact, the heightened danger only exacerbates and expands.  To find out a bit more about Eliot’s personal journey and struggles he confronts, we had the opportunity to talk with star Hale Appleman, who revealed what is happening in Season 2.

Eliot’s life changed dramatically since the first season. He’s now reigning king of a magical kingdom, which I don’t even think he ever dreamed of. It kind of just fell in to his lap.
HALE:  He sure is, yes.  It’s almost like he established himself at Brakebills as a kind of the head of his class and I like to say he’s sort of the unofficial Prince of Brakebills. There’s a air of royalty about him that he’s always possessed or that he’s potentially constructed in this new image he’s created once he found magic and found school. The King thing is a bit of a tall order. It’s a huge responsibility and he’s taken on a promise to withhold from a lot his most beloved past times including drugs, sex, et cetera, et cetera.  The freedom of going where he wants to when he wants to and I think that that’s a ridiculous proposition for a person like Eliot and it’s interesting to see him really try to take that on.

Does he want to succeed as King or is he trying to find a way out?
HALE:  I would say that he’s definitely trying to fight it or do it his own way which isn’t enough at first. I would say that he’s turning to his comfort zone. He’s trying to reimagine Fillory as Brakebills which he can’t because Fillory is a world unto itself. Brakebills is a finite little bubble that he was rescued from a horrible past when he found Brakebills and there was an end there. There was a top of a regime that he climbed to and for him to be thrust as the leader of country and an entire new world that he has literally no experience in is unthinkable, unfathomable, ridiculous.

What is he enjoying about it? Obviously it’s weighing on him, but there’s got to be something he likes about it.
HALE:  [Laughs] I don’t know. There’s the childhood dream of fantasy. Right? All of the best parts of our favorite fantasy stories which is what Fillory was to characters like Quentin (Jason Ralph) and perhaps even Eliot as children, but the reality of that place is much harsher than they imagined. There’s a lot of conflict there and I think hopefully there will be things to love about it, but I don’t know if we’re there yet.

What about his soon-to-be bride and wife?
HALE:  Well you know that’s an arranged marriage and that’s something that he really took one for the team when he offered himself up to be bound for life in a faraway kingdom with someone he doesn’t know and to swear off all other forms of sexual activity. That’s a really incredible challenge for him. I I know some fans were perhaps worried that that marriage goes against his innate sexual desires in a lot of ways, but I think it’s important to remember that it is an arranged marriage and the navigation of that also is a source of kind of internal conflict for him and that’s really interesting I think. Hopefully, people will enjoy watching him navigate that in some way. He really is not trying to give up on the life he’s created for himself before this moment. There are ways in which he has to, but he’s really going to do his best to recreate what he knew.

How does Margo (Summer Bishil) fit in to his new world? Does she have a place there or are they going to have to struggle to try to find a way to have their friendship and camaraderie?
HALE:  We’ll have to see. For sure Margo and Eliot are destined to be. They are essential to each other in some way that is in a way a stroke of fate. They are each other’s family, they are kind of each other’s first love in a way, you know. It’s complex, but there’s a sense that I feel very strongly that they will find each other.  They will keep finding each other.

How does Eliot feel about these villains that have cropped up? We’ve got the Beast (Charles Mesure), we knew about the Beast, but Reynard (Mackenzie Astin) has now entered the picture and now Eliot’s kind of the man he supposed to be dealing with all these kinds of problems.
HALE:  Right, right. Well, I would say that the Beast was a loaded issue for him when it became personal. It was sort of important when Alice (Olivia Taylor Dudley) and Quentin were at stake which was always somewhere on Eliot’s radar and Eliot cares very deeply for Quentin. That’s certainly was always a huge concern for him, but then when his boyfriend became an agent of the Beast that really took it to another level and that was a horrifying chapter of his life to have to live through in the aftermath of that was something he really couldn’t handle so he fell down a long, dark twisty path of drug abuse and some shame and all sorts of other … yes, he couldn’t deal with it. I don’t know if he feels that responsibility [to deal with the Beast and Reynard] as King. I think he feels connected to the safety of his family and friends who he holds dear. It think that Eliot is kind of an unofficial heart or like hearth of the group. He’s the one who will throw a nice dinner for his friends and bring them a drink at the end of a long day. The gesture of that is meaningful even if he would shrug off the sentimentality of it.  He had endured a personal losses before that in fact. His first encounter with magic was discovering that he was telekinetic when we willed the school bus to trample his bully/abuser. That’s the issue with the Beast and his boyfriend was another scratch on his wall of murders, so he’s definitely had at least one other before that and they’re always magically connected and he comes from a place of a great deal of pain. This kind of took the cake probably because it was a romantic involvement and not his significant and heartbreaking for him. He’s been through this kind of thing I think a bit more than a lot of the other characters so he’s already had two … He’s lived through some of these experiences and shoved them way down and tried to forget they existed and the whole denial thing that he’s so good at. Using that to his advantage to live a glorious, happy life that he’s pretending to live. I think that’s part of what makes him a really interesting character.

Is he going to come to the rescue of his friends or is he going to offer a safe sanctuary?
HALE:  You’ll have to watch and find out. I would hope that he would. I think that he has a loyal heart.

They’ve said that Fillory, of course, your magic seems accessible and it’s stronger. Does Eliot able to tap in to that and have another resource and the ability to just utilize that?
HALE:  That’s a really great question. That potential is definitely there. There’s not that much that has happened that I can say fully utilizes that experience, but I think that there will be, hopefully.

They’ve always teased us on the extent of his abilities. He, of course, thinks he’s greater than everybody and perhaps he is and sometimes they rely on him for that. I still feel like they haven’t really given him a kind of chance to be unleashed.
HALE: I would like to see that.

There’s a reason he’s chosen the King.  Somebody assumes there’s great power there.
HALE:  Absolutely and there is. I think he’s the most naturally gifted magician. I think Alice is the hardest study and I think she’s the most powerful in her studies, but I think that Eliot is … it comes to him the most naturally. I agree with you, I don’t think he’s had a real chance to show what he can truly do yet.

Where do you think Eliot’s journey’s going?
HALE:  I think it’s sort of about denial and trying to relive the past. Then I’d say the real huge them for him upcoming is about responsibility and taking on responsibility at the price of who he felt he wanted to be and having to let that go.  It’s not quite what you imagined and sometimes for the best.

Do you think Fillory is in Eliot’s best interest or would he be better back in Brakebills world?
HALE:  I would say I wouldn’t know if Fillory has Eliot’s best interest at heart, but I would say that there is an element of fate at play when we think about where Eliot belongs and why he has become King and how he has become King. There’s an element of fate at play and it’s necessary that he be King.

To see if Eliot and Team Brakebills can successfully stop both the Beast and Reynard from their hell-bent paths of terror and destruction, be sure to tune in for the premiere of THE MAGICIANS on Wednesday, January 25th on Syfy.