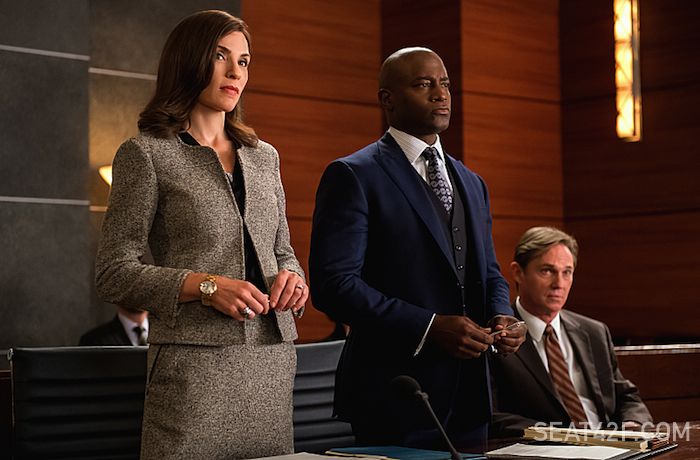 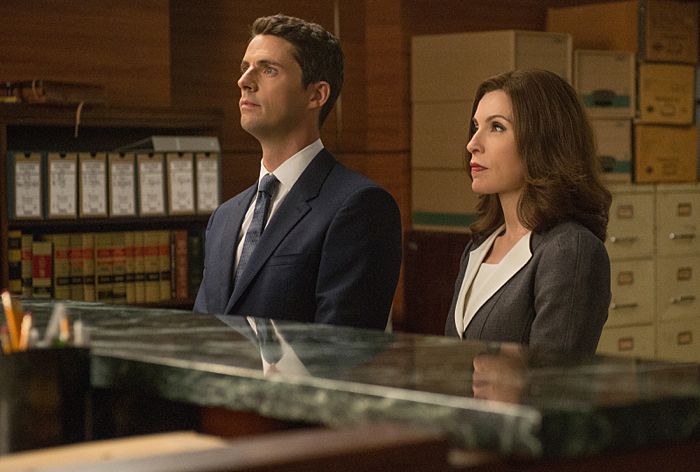 Last season, CBS’s THE GOOD WIFE left some hanging questions. Will Diane (Christine Baranski) be joining Florrick, Agos, & Associates? Will Alicia (Julianna Margulies) run for State’s Attorney? Plus, who will be in a relationship with whom next? To say last night’s season six premiere, “The Line,” addresses those is fair, but they are only a few elements in a large story that certainly hits the ground running.

As “The Line” begins, Cary (Matt Czuchry) is arrested for charges related to drug conspiracy. This is, of course, connected to the firm’s client, Lemond Bishop (Mike Colter), the biggest drug dealer in town. Viewers will assume Cary is innocent, of course, knowing that while he pushes boundaries sometimes, he wouldn’t knowingly commit such an illegal act as telling a kingpin how to transport illicit substances. But as Kalinda (Archie Panjabi) finds out from her law enforcement ex, Sophia (Kelli Giddish), there is a recording, and the words on it may imply that Cary is guilty, even If his speech is being misconstrued. Who eventually tries to pay his bail might actually worsen matters, rather than help them, as the judge will be reviewing the source of the money, and while it doesn’t directly come from Bishop, it is connected.

Ever since Bishop is introduced on THE GOOD WIFE, there is always the possibility of a story like this one coming to fruition. The writers have danced around it before, and it totally makes sense and feels right to go for it now. Bishop is not a good man, and while the lawyers deal with him partly because of money and partly because of fear, keeping him on the client roster comes with dangers that are just now being realized. Bishop cutting Cary in prison to test his loyalty only makes him seem even scarier.

What’s most nerve-racking for the fans watching this on their television sets is the utter frustration of anyone’s ability to help Cary. We know he doesn’t deserve what’s happening to him, and it certainly isn’t fair that his rights are being sidelined or outright ignored. We feel his frustration, and Alicia’s frustration that she can’t get him out of this. THE GOOD WIFE does an excellent job of telling the story in such a way to really help viewers emphasize with the emotional component.

It sucks further that the DA assigned to prosecute Cary is Finn (Matthew Goode). Finn and Alicia have formed a pretty close friendship recently, and this case forces them onto opposing sides. Finn deals with this by having Alicia removed as Cary’s attorney. This will allow Finn to pursue what he thinks is a perfectly legitimate case, and it may just keep him on somewhat friendly terms with Alicia, if she can keep in mind that he’s just doing his job. So far, she seems to be able to, but we’ll see if that lasts.

Cary’s arrest also makes Diane vulnerable. She is hoping to join Florrick Agos, and agrees to represent Cary when Alicia cannot. She tells Louis Canning (Michael J. Fox) and David Lee (Zach Grenier) that she’s retiring, but they’re smart enough not to believe her. They can now user her connection to Cary to try to convince her clients to turn on her, which may actually threaten her move, since the payroll Diane brings with her might be the only reason Cary will agree to bringing her on. It’s all quite a big mess.

THE GOOD WIFE is brilliant at balancing clusterf***s such as these, tying all of the various threads together in unexpected and compelling ways. What happens to Cary influences just about everything else, story lines already happening as well as new ones. It’s tightly written, fast-paced stuff with some truly terrific characters at the center of it.

There is a side story in “The Line,” less bonded to the Cary thread than most, in which Eli tries to convince Peter (Chris Noth) that Alicia should run for State’s Attorney, which will surely be affected by how Cary’s case plays out, though isn’t yet. Throughout the hour, Eli’s daughter, Marissa (Sarah Steele), sits near him and engages with her father. Marissa isn’t strictly necessary to the episode, but she’s very welcome because of the level of humor she brings to bear, and how her presence changes her father. Perhaps changes is the wrong word, as Eli (with newly dyed hair) is still the shark fans love. But she does get to play with him, and it makes for a more entertaining episode.

THE GOOD WIFE is an example the Big Four networks should aspire to copy and repeat, though not exactly, of course. It’s far better than the procedural junk that most crime and legal shows go for, and its television-style drama seems higher quality than the primetime soaps. It’s both entertaining and smart, meaning viewers don’t have to feel guilty about watching it. And six seasons in, it’s somehow gotten better, despite being really good before.

THE GOOD WIFE airs Sunday evenings on CBS. The air time varies each week, though, because of CBS’s inability to properly schedule football, even after many years of practice. If THE GOOD WIFE were a lesser show, I’d say ignore it, but because it is what it is, please just set your DVR for multiple hours because it’s worth it not to miss this gem. Then write or tweet CBS and tell them to get their act together.