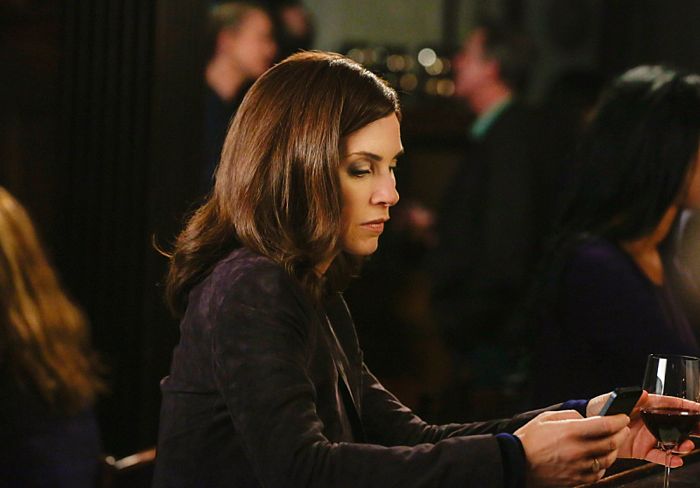 Numerous players on CBS’s THE GOOD WIFE go into “The Red Zone” this week. Alicia (Julianna Margulies) tries to do what she thinks is right and good, but quickly learns that, like Games of Thrones’ Jon Snow, she knows nothing (about campaigning or how things she does will play to the public). Cary (Matt Czuchry) considers testifying on his own behalf, since any witnesses that can help him are dead, but prep for said testifying goes horribly wrong. Kalinda (Archie Panjabi) is caught between the woman she loves, the man she loves, and a cold-hearted murderer. So, it’s just a typical day at Florrick / Agos / Lockhart.

Candidate Alicia is going to be different than Lawyer Alicia. Now that she’s made the decision to run, she’s also made the decision to change, to become a politician. She resists, of course, but she does want the office, so she can’t help but make allowances. “The Red Zone” finds her listening to Eli and Johnny (Steven Pasquale) and the focus group they conduct. She may not like it, but she is coming around to how the game is played.

Can Alicia do this and still hold onto herself? I think so. Her case against Louis Canning (Michael J. Fox), which she wins be default, proves that. It’s a way to show her keeping a grip on the woman she’s become, the woman worthy of the office.

The question is, though, how far will she go? When her opponent is Castro, one could see her making quite a few sacrifices because he’s an evil bastard and needs to go down. Now that she’s up against a much more upstanding citizen, she may be tempted to hold back. Alicia hates Prady, who did trick her, but she has to admit he’ll do a much better job as State’s Attorney than Castro, so that might give her pause at a key moment.

Cary needs a pause in “The Red Zone.” With trial fast approaching and no one left to help him, he takes Kalinda’s advice to testify for himself. But angry that Kalinda is lying to him, sleeping with her old flame, Lana (Jill Flint), Cary gets emotional when Viola Walsh (Rita Wilson) and Diane (Christine Baranski) attempt to prep him. This Cary seems entitled and arrogant, and while we the viewers who know and love him can understand his frustration and rage, a jury will not. It takes Alicia in a moment of brutal honesty to make him pull back and find his center.

I’m really worried about Cary. He is drowning. He reaches out to Kalinda for an emotional life raft, and she snatches it away. Whether because she doesn’t feel the same way or because she’s trying to protect him, the reason doesn’t matter. Cary is alone with this and things are not looking good, even once he gets his head on straight.

Funnily enough, it is Kalinda that can save him. Kalinda is also backed into a corner, being intimidated by Lemond Bishop (Mike Colter), who doesn’t like her sleeping with a fed. Kalinda knows how dangerous Lemond is, how he’s killed those that inconvenience him. Kalinda alone at the law firm could come forward to testify against Lemond and stop him once and for all. It’s losing a valuable client, whom they’ve at least temporarily lost anyway, but it’s the right thing to do, if she can manage to stay alive while doing it.

I’m not sure if Kalinda is at that point yet, but she should be. By choosing not to stick a card in Lana’s wallet, Kalinda has marked both herself and her girlfriend for death or further threat. This is the time Kalinda needs to come clean to Lana or other law enforcement officials and go into witness protection. Though, knowing Kalinda, should she decided to go on the take-Lemond-down path, she’ll want to gather more evidence first or wear a wire, which could end tragically. Panjabi is slated to depart at the end of this season of THE GOOD WIFE anyway; might the show make her exit a little sooner and a little more permanent?

“The Red Zone” is another outstanding installment of THE GOOD WIFE, jam-packed with gripping story and numerous, great, recurring guest stars. The stakes seem high, the drama feels real, and no one is in a great position, making fans drool with anticipation for the next episode. I’m impressed the show has kept this up at such a high level for over a year now, and hope it continues indefinitely.

THE GOOD WIFE airs Sundays at 9-ish ET, depending on football, on CBS.