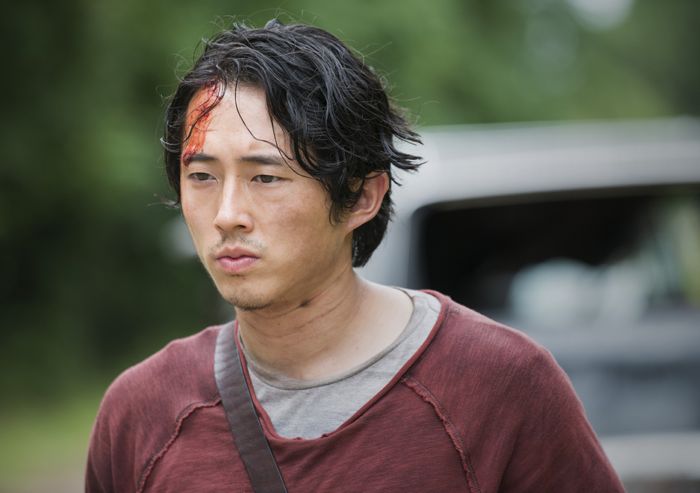 This week’s episode of AMC’s THE WALKING DEAD, “Self Help,” follows six of our survivors on the road to D.C. They don’t get very far, running into issues both man-made and Walker-inspired, but we learn a bit about a couple of the players, and a startling revelation ends the hour in a big way.

The entire reason this group splits off from the main one is Abraham Ford (Michael Cudlitz). Driven in his mission to bring Eugene (Josh McDermitt), who says he has a cure for the outbreak, to the nation’s capital, Abraham refuses to be patient and wait for the others. He doesn’t put up with any delays or detours, pushing on, even if the going is slow. This is a man who has blinders firmly in place.

One may wonder how Abraham got that way, and the initial reasoning seems to be that’s he a soldier who only knows how to take and follow orders, but that is far too simplistic an explanation. “Self Help” shows us how Abraham’s family flees from his brutality, only to die without his protection, taking Abraham to the point of suicide. He is strong enough to survive in this world, but his loved ones were not. Had Eugene not shown up with this cause when he did, Abraham would have no reason to live, everything he cares about being gone. The mission is all that is keeping him going, a shred of hope in a hopeless existence.

Sadly, this is stripped away when Eugene reveals that he is lying. Abraham reacts the only way he knows how, punching Eugene in the face. They are sort-of friends before this point, but Abraham justifiably feels betrayed. Eugene’s lies remove that thread to which Abraham is clinging, so Abraham has nothing left. Eugene could not have done anything worse to Abraham, even though Eugene saved his life.

Eugene reveals his motivation in “Self Help,” too, first in small pieces to Tara (Alanna Masterson), then to the group as a whole. He speaks of feeling helpless, knowing he couldn’t survive on his own. He had to find something invaluable to contribute, to make people want to take care of him. The lie, selfish as it might be, is his way of fighting for survival, something everyone understands. He is a desperate man, too, and his method of staying alive isn’t really that bad, compared to what others have done, especially when he confesses to those he trusts. Even the bus sabotaging, while potentially dangerous, doesn’t seem that bad in the face of everything else, especially since no one was seriously hurt.

I do think Eugene can take care of himself to a certain extent now. He finally stabs a Walker this week, stepping up in a way he has not before. He’s not the group’s strongest fighter by a long shot, but I think part of why he spills the secret is so he can begin contributing as he should. This people have been kind to him, especially the larger group, and he feels guilty for those who have died while he hid behind them. He’s connecting with them on a personal level, something that clearly doesn’t come easy to him. He’s a coward, but facing and owning up to his fears puts him on the path to becoming a stronger man.

What will the group do now? Hopefully, turn around and go back to the others. D.C. may still be their best hope of survival, and I assume that’s where they will end up, as they do in the comics, though Eugene’s confession comes later. But they all should go together. Without Eugene’s non-existent knowledge, the urgency is gone.

I also hope Abraham finds another reason to continue. Maybe his relationship with Rosita (Christian Serratos), which seems playful but sincere, not just about sex, could help? She may not be the love of his life, but he has to care about her, right?

This is the episode of THE WALKING DEAD I’ve had the least to say about in recent memory. Yet, I still feel it is a good, solid episode. It concentrates on only a few things, but it does them very well.