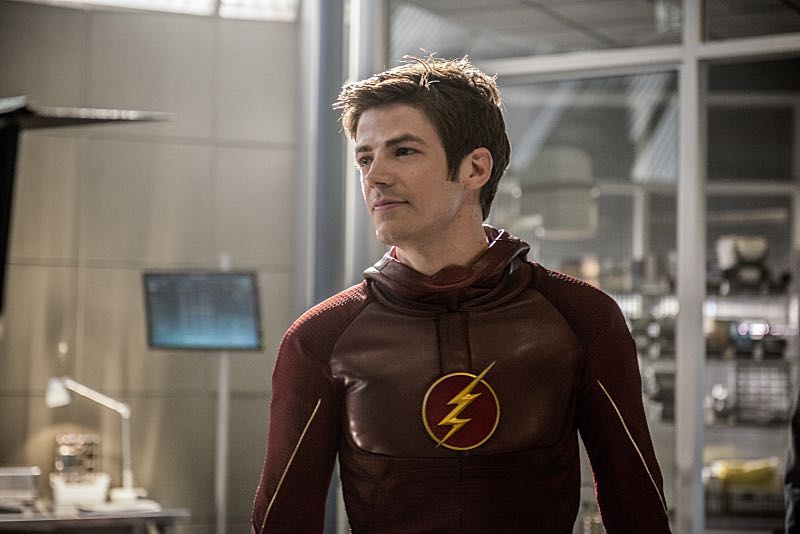 Last night’s season premiere of THE FLASH on CW picks up six months after the spring finale. The metropolis wants to honor “The Man Who Saved Central City,” meaning the titular superhero, but Barry (Grant Gustin) doesn’t feel like he’s the one who deserves the credit. After all, both Eddie (Rick Cosnett) and Ronnie (Robbie Amell) gave their lives in the fight, so Barry understandably is reluctant to receive praise. But the problem goes much further when he won’t allow anyone to help him be The Flash anymore and he encounters a villain, Atom-Smasher (wrestler Adam Copeland), whom he cannot defeat himself.

“The Man Who Saved Central City” is a great character-driven hour for Barry. His despair and urge to pull away in order to protect his loved ones is understandable, and one virtually every superhero goes through at one time or another. Thankfully, unlike, say, Arrow, Barry is much more accepting of the help others want to force upon him, and it only takes him a single hour to change his mind. Not that Iris (Candice Patton) and Joe (Jesse L. Martin) give him a choice in the matter.

Barry isn’t the only one who has split off from the group. Caitlin (Danielle Panabaker) now finds Star Labs too painful to be in, constantly reminded of Ronnie. She blames herself from not leaving town with him when he asked her to go. As such, she’s accepted a job with a different lab and hasn’t kept in contact with anyone. It only takes one visit and heart-to-heart from Barry, though, to make her feel better. After all, the whole team needs to stick together, and she’s soon back where she belongs.

These elements show us how different THE FLASH is from Arrow and other superhero ventures. It has become in fashion to have our heroes be moody loners, and in many cases, that’s fine. But it’s also refreshing to get a lighter touch sometimes, and Barry is the type of individual this fits well with. The show can be dark in sections, but a thread of optimism runs through it and is an essential part of this series.

“The Man Who Saved Central City” is pretty cool overall. I like that it waits to show us Ronnie’s death, doling out details sparingly at first, but not to the point where it gets annoying. I enjoy very much Barry’s dream sequence at the beginning where he’s stopping Captain Cold (Wentworth Miller) and Heat Wave (Dominic Purcell) with the help of his full team, making good use of recurring players. Cisco’s (Carlos Valdes) new job with the force is fun, and it’s gratifying to have Dr. Stein (Victor Garber) join the team. The idea that Barry is secretly rebuilding the city at night is neat, too, something most superheroes wouldn’t think to do.

Dr. Wells’ (Tom Cavanagh) presence hangs heavy over the season premiere. We see him in Barry’s dream, and in a video will. Both times he seems kinder, not the evil villain from the end of the season. Is THE FLASH seeking to redeem him? The video he leaves, which provides evidence that frees Henry (John Wesley Shipp) from prison, reaffirms this. I’m not opposed to such a reverse course as long as it’s handled well, giving reason to forgive him before his memory is improved upon. Will he still be around this season to keep the rebranding going, or was his name only in the opening credits for this one last hour?

Despite everything great about “The Man Who Saved Central City,” though, there are two glaring flaws that hurt the episode. One occurs when Joe, Cisco, and Iris openly discuss Barry being The Flash in the middle of the precinct. Aren’t they concerned about blowing his secret identity? Other officers have to hear them, and the last time I checked, only a small circle of people know that Barry is The Flash and it should stay that way. The second is that, right after getting out of prison, Henry leaves town with no explanation.

Henry’s excuse that he’ll get in Barry’s way of becoming who he’s meant to be is crap. Sure, he might be a distraction for a bit, but how does Henry being around impede Barry’s mission? Barry has lots of help, and none of them get in the way. Why doesn’t Barry push for further explanation? And where is Henry going? What else does he have to go to after fourteen years in jail? How is he going to start a new life elsewhere with nothing to his name?

Still, even with these missteps, THE FLASH is generally strong. It’s an entertaining show that has good story and characters. That makes it a show I look forward to each week.

THE FLASH airs Tuesdays at 8 p.m. ET on the CW.