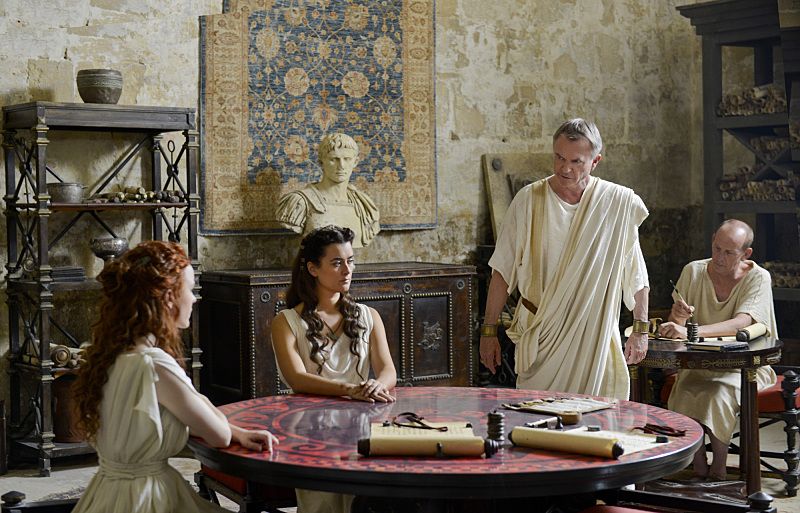 CBS presents the miniseries THE DOVEKEEPERS this week. The four-hour story will be split between two consecutive nights, and tell the based-on-truth story of several women living in the first century A.D. who end up at Masada during the famous siege. Based on the novel of the same name by Alice Hoffman and produced by Roma Downey and Mark Burnett, the goal seems to present a piece both historical and biblical.

The Dovekeepers stars Rachel Brosnahan (House of Cards) and Cote De Pablo (NCIS) as two women telling their tale to a judgmental Roman scholar (Sam Neill, Jurassic Park, Peaky Blinders). This is a pretty strong central trio, as two of the three are nearly inarguably very good actors and the third is at least decent. They are all well cast in the roles they inhabit. They are joined by an ensemble, but principally Kathryn Prescott (Finding Carter) and Diego Boneta (the upcoming Scream Queens), so it seems to be they did a pretty decent job casting this piece.

The tone reminds me very much of last year’s The Red Tent. It features strong women, the central players, who listen to their heart (and perhaps a certain other organ) in making decisions. It paints them as heroic and noble, though they engage in adultery and other unsavory acts. They pray to a god whose orders they do not obey, and live in a time where such misdeeds could garner very severe punishment. So I guess we’re supposed to admire them for sleeping with married men at a time when women could be killed or ostracized for such a thing, it being brave to buck society’s rules and morals? I don’t agree with the punishment of the day, but the crime isn’t exactly to be admired, either.

The male characters are much less developed. Several are mere eye candy, while one serves as little more than a narrator to THE DOVEKEEPERS. It’s hard to attack THE DOVEKEEPERS on this, given the number of works out there where the opposite is true, but it certainly doesn’t paint as complex and fully fleshed out a world as it could.

Honestly, THE DOVEKEEPERS is a soapy women’s film with lots of romance and plenty of obstacles preventing happy endings. This is not something I am all that into, but the Hallmark Channel and Lifetime have proved there is an audience for this type of fare, and this miniseries falls somewhere between those two’s offerings, less cheesy than either, and a hair less melodramatic.

The bible-reading crowd are also likely to enjoy it. It is very in-fashion right now to do new adaptations of religious stories or other tales from that era. This is set shortly after most of the New Testament, but finds personalities with the same superstitions and beliefs as those in that tome, being set in the same part of the world. As such, it feels like it is very much a part of this same genre, even if technically it is not, complete with dreams and visions to match the other unworldly mindsets of the era.

Yet, from a storytelling perspective, THE DOVEKEEPERS is just not that great. The pacing is slower than it needs to be, and the narrative follows a very specific point of view, likely alienating those who don’t share it. Situations are presented in a very black and white fashion, with characters that disagree with the protagonists clearly painted as being in the wrong, even if it is easy to feel they are not. Such a powerful bend works well for a target audience, but not for the public in general. THE DOVEKEEPERS is just not complex enough to hold many potential viewers’ attention.

Which is not to say it’s a total waste of time. I’ve cited a couple of groups that will enjoy it, and I expect it will have plenty of viewers. It’s not for everyone, but since the airwaves are not exactly flooded with this type of fare, those in the niche it fills are likely to be appreciative.

THE DOVEKEEPERS airs this Tuesday and Wednesday nights at 9 p.m. ET.