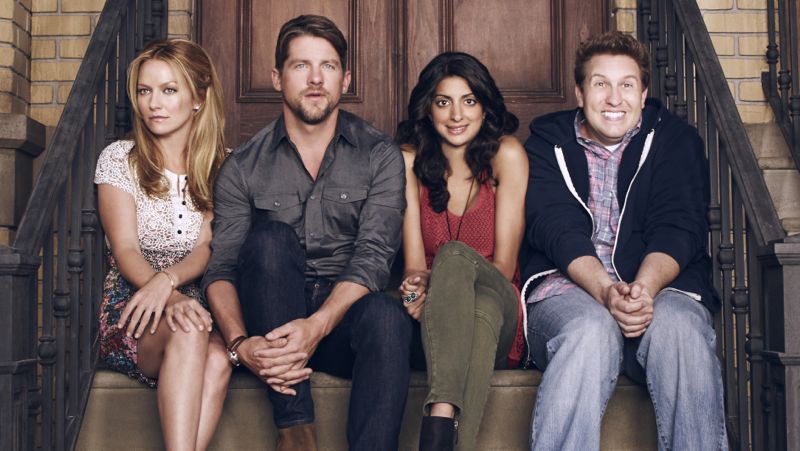 FOX’s latest sitcom, premiering this week, is called WEIRD LONERS. As you might expect, it follows four individuals who could be labeled with the descriptors in the title. They end up together by circumstance at a time when they could all really use a friend or two, and will likely become a stable group because of convenience and a common sensibility, getting themselves into wacky situations that don’t go well because of their oddness and selfish natures.

The ensemble is mostly made up of network comedy staples. Zachary Knighton (Happy Endings, FlashForward) plays Stosh, who blows up his life and career when sleeping with his boss’s fiancé. Since his condo is company-owned, too, Stosh decides to crash with his lonely, possibly unemployed cousin, Eric (Nate Torrence, Studio 60 On the Sunset Strip, Hello Ladies). Eric goes out looking for wall art and finds Zara (virtual newcomer who fits right in, Meera Rohit Kumbhani), an aimless artist. At the same time, Stosh can’t help but interfere with Eric’s hot neighbor, Caryn (Becki Newton, Ugly Betty, The Goodwin Games), who is considering marrying a boring guy (David Wain, co-creator of Childrens Hospital), the exact opposite as the type of man she is naturally inclined towards. And, because why not, Caryn asks Zara to move in with her, meaning all four now dwell in two adjoining townhomes.

As you can see, none of the four have their lives together, and all are in their mid-30s, past the time most of their peers decide to grow up, a fact highlighted in the opening of the pilot. A little arrested development is mixed with a lack of self-awareness, at least for most of the group, giving ripe ground for comedy to grow upon.

WEIRD LONERS isn’t exactly a new idea. Perhaps the characters are more emotionally stunted in this show, but it’s not that different from Happy Endings, How I Met Your Mother, Cougar Town, Friends, or a myriad of other programs built on the theme of acquaintances with a strong bond. It’s a formula that works pretty well with the right actors and writers, and despite its flaws and formulaic approach, Weird Loners certainly seems to have both of those groups working for it.

Because of the starting point of each of these characters, there is ample room for growth and development moving forward. The focus is likely to be on goofy situations and one-liners, but all four of the players also bring emotional depth and complexity to their roles, making them seem like three-dimensional individuals. People such as they are sure to find ways to better themselves over time, their coming together providing the resources all of them are lacking at the start.

Will that be enough for Weird Loners to succeed? I don’t know. The most recent good example of this, Happy Endings, got a mere three seasons. It may be that this recipe has been prepared so often that viewers are tired of it, and not looking for another helping. I could easily see it being a one-and-done late season also-ran. But I really like the cast, all of whom deserve to be on TV on a regular basis, so there’s always the chance that enough other people will appreciate it, as I have done, and give it the numbers to stay on the air.

If you’re not sure if you should check out WEIRD LONERS, I do recommend it. While not being particularly original, it succeeds at being funny. The pacing is good, the laughs are frequent enough, and the personalities are engaging, if not likeable. The characters aren’t completely realistic, but they do feel authentic. If nothing else, it is an entertaining half hour without the plot holes or quick, easy gags that many shows succumb to.