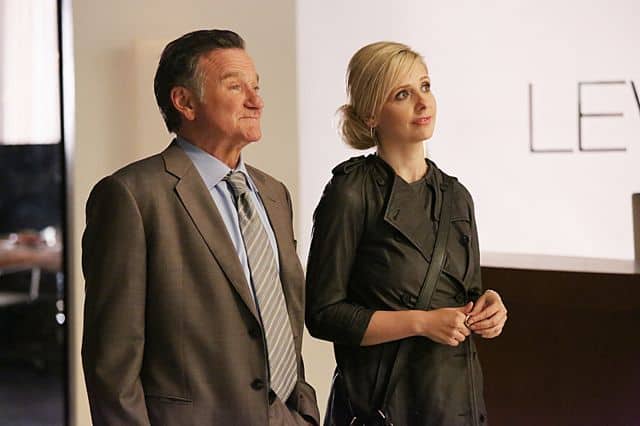 THE CRAZY ONES is the new CBS sitcom starring Robin Williams and Sarah Michelle Gellar. Given the caliber of talent on the project, as well as the fact that Williams tends to go big or go home, it seems like the project will either be absolutely terrible, or terribly terrific. After viewing the “Pilot,” I am leaning towards the latter.

Williams (Good Will Hunting, Night at the Museum) plays Simon Roberts, an advertising executive who runs his own firm along with his daughter, Sydney Roberts (Gellar, Buffy the Vampire Slayer). He is going off the rails, losing his edge, but still prone to jumping off a cliff without a net, taking the big risks that made him successful. She, on the other hand, is sensible, and often able to clean up her father’s messes, but soon sees that sometimes his method is the one that’s needed.

The characters kind of are THE CRAZY ONES compared to everyone else, but that doesn’t make this show just a zany version of Mad Men. Instead, the title refers to an old Apple commercial, in which brilliant minds are highlighted as having been considered crazy by their peers. Are Simon and Sydney creative and smart enough to be included in this group? Perhaps not, but it’s who they aspire to be, and influences their attitudes towards work and life, informing on their personalities.

Williams is allowed to do what he does best, launching from manic bit to manic bit, swiftly rolling through his impression index. However, he isn’t doing it only to be silly. It’s a symptom of the insecurity he feels and the control he is losing. It actually exposes a layer of vulnerability that nicely shows through, and makes the character not only funny, but highly sympathetic.

We do feel Sydney’s frustration with her father, worrying he is losing his marbles or his touch almost as much as he is, but also putting on a brave face. She covers for him when she has to, speaks her mind in private when she can, and basically tries to roll with his punches, respecting who he is and what he has accomplished, while still supporting him in her own way. It’s a great complement to the other role.

Gellar and Williams have an unexpectedly natural chemistry. Their every line radiates a shared history, both loving and bumpy. They seem very familiar with one another, and while they are quite a bit different in temperament, there is still a family resemblance that bleeds through in the best, subtle ways.

Interestingly, THE CRAZY ONES feels more like a drama or cable half hour than your typical network sitcom. This may be the darker style, largely avoiding the slapstick except when it’s couched in deep feeling. There’s a serious undercurrent. Unfortunately, this may make it a little less accessible to some viewers, though this makes it a better series.

Williams and Gellar are buoyed by a strong supporting cast. James Wolk (Mad Men) stands out as Zach Cropper, a buddy to Simon, perhaps being similar to Simon in his heyday. Zach is smooth and magnetic, something needed in the world of advertising, charming most and actually backing that up with a good work ethic. Wolk is sure to become a fan-favorite here, the way he has in other efforts. There’s also Hamish Linklater (The Newsroom) as a grumpy guy who works closely with Sydney and Amanda Setton (The Mindy Project) as an enthusiastic, though perhaps not overly bright, assistant.

Were the “Pilot” left up to only this ensemble, I think I would have found it even more enjoyable than I did. Unfortunately, the story soon veers into wooing Kelly Clarkson (herself) for a McDonald’s commercial. This is where things falter, as Kelly does not come across as a likable individual and engages in odd activities that don’t quite match the other scenes. I’m not sure it’s Kelly fault, but her part of the half hour just doesn’t rise up to the rest of it, and isn’t in sync.

Of course, this is only a “Pilot.” If THE CRAZY ONES can build upon its positive elements, which are definitely plenty, it could end up being a serious contender on the fall schedule. Hopefully, that’s what will happen.

THE CRAZY ONES premieres Thursday, September 26th and 9 p.m. ET.