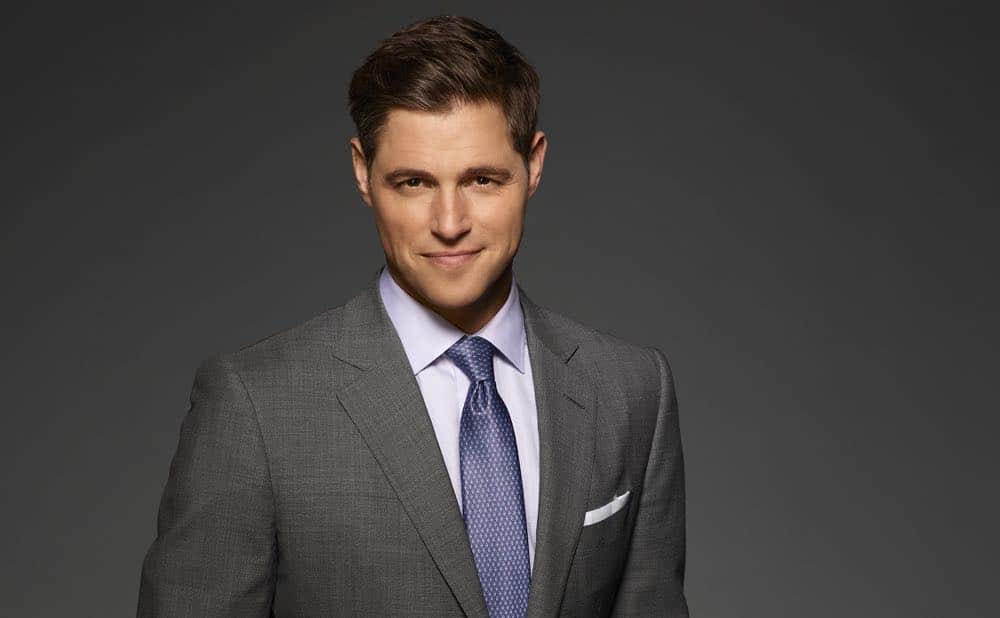 With a an eye for scripts that speak to the soul and challenge the mind, Sam Page has carved out a strong career. Perhaps it is because Sam has recently portrayed characters who recognize that unique and amazing women surround us in all walks of life, or it is simply because he carefully chooses roles that empower women on screen, it is a joy watching Sam bring his talent too a variety of roles on screen. In an exclusive interview, Sam reflects on two of his recent roles: one as an observant prince in a Hallmark Channel film and the other as a corporate lawyer in Freeform’s scintillating and searing drama series THE BOLD TYPE.

You have been busy working on THE BOLD TYPE and a couple of movies with Hallmark. Maybe you can talk about what it’s been like for you this last year working on THE BOLD TYPE and with Hallmark?
SAM: It’s been really wonderful. I started last year doing a shoot in Chicago, “The Perfect Christmas Gift.” That was in February and then found out that Hallmark bought the movie because it wasn’t a Hallmark movie when I worked on it. Then we went into production on THE BOLD TYPE, and I didn’t stop THE BOLD TYPE until July, and then I took a couple months off to spend with my family, and then I did “Royal New Year’s Eve.” It’s been a great year working with really wonderful people and I’m getting a good variety of stuff in and traveling. It was fantastic, I loved it!

The most recent one to air was the New Year’s film, “Royal New Year’s Eve.” What it was like working with Jessy Schram on that project?
SAM: Working with Jessy is a lot of fun. We laugh a lot. She’s so smart and so talented and so present and open. Like when we were sitting around the set we were having such a good time, the director told us later, “I don’t know what you guys are talking about. I just told the camera to roll on you guys while you were just sitting there waiting for us to start, because you guys had such good chemistry. You were just having fun together, and if we could just have b-roll of that, we could use that — we really we could use that a lot.” Jessy’s just incredibly, incredibly talented. She could do anything. Every single take that she did was A-plus. The only problem was just keeping up with her!

Every time you guys were together speaking on screen, it was interesting to listen to as it wasn’t your quite typical dialogue or accent.
SAM: Yes, I’ve never done an accent before. A lot of times, I would just say, “Hey, can I change this word to something similar because it’s really hard to say with an English accent?” I had a wonderful coach on set that they provided for me that would we drill me every time between every take. We were drilling on the lines that we were shooting and then between scenes, running around rehearsing, rehearsing, rehearsing just with the coach. But Jessy and everyone else, they didn’t need to rehearse, they’re just pros. It was fun. It was so fun at the end of the day to be totally exhausted by having to be so focused on the accent all day, you really feel like you’ve accomplished a lot more.

How did you know that THE BOLD TYPE was a project that you wanted to be a part of?
SAM: THE BOLD TYPE — I loved right away. I read it and I had just come off working on an HBO show, it was really high profile, but it ended up getting shut down and never got to see the light of day. It was amazing, wonderful experience, but it got killed by episode seven. They just buried it. So when THE BOLD TYPE came up, my agent said, “Listen, they really want to see you for this. But I don’t know if you are interested in doing a series on Freeform right now.” But I had worked for Freeform before and they were always been really good to me and it was always been a really good experience. So I read the script and I thought, “Yeah, this looks great. This is the future. They can tell a lot of very pertinent stories about what’s going on and I’d love to be a part of it.”

Did it give you pause once you realized that the character you portray on THE BOLD TYPE is part of the most controversial storyline because he is in a power position and having a relationship with somebody at a lower level in the same company?
SAM: Well, I would not have been interested in the role if they were just kind of that. I wanted that to be the problem of their relationship. They are gonna be star-crossed lovers. They really do care about each other and they really do want to be with each other, and how is gonna be the big conflict in their situation.

Have you been told about what kind of storyline your character will have for Season 2?
SAM: I’m going into the writer’s room next week. But it’s like, I don’t want to be told. I just want to get the scripts and find out that way. Because that’s always fun. It’s like opening a present.

What surprised you about the first season of the show?
SAM: Honestly, what surprised me is that there wasn’t as much stuff between Meghann [Fahy] and I. I understood that was going to be our major storyline. Then, all the sudden, it wasn’t happening and most of our scenes together were phone calls and I’m like, “what the hell is happening? We have good scenes when we have good scenes. Give us more good scenes.” But I’ve been told that will be remedied in Season 2. The audience will get to know [Richard] more. They had to cover a lot of ground with the girls in Season 1 — and rightfully so, they’re so talented. Those girls are amazing — all three aces.

Katie (Stevens), Aisha (Dee) and Meghann (Fahy) also seem like they’re crack-ups and like they’d be a lot of fun to work with.
SAM: [Laughs] They are nice and fun to hang out with. I love working with them!