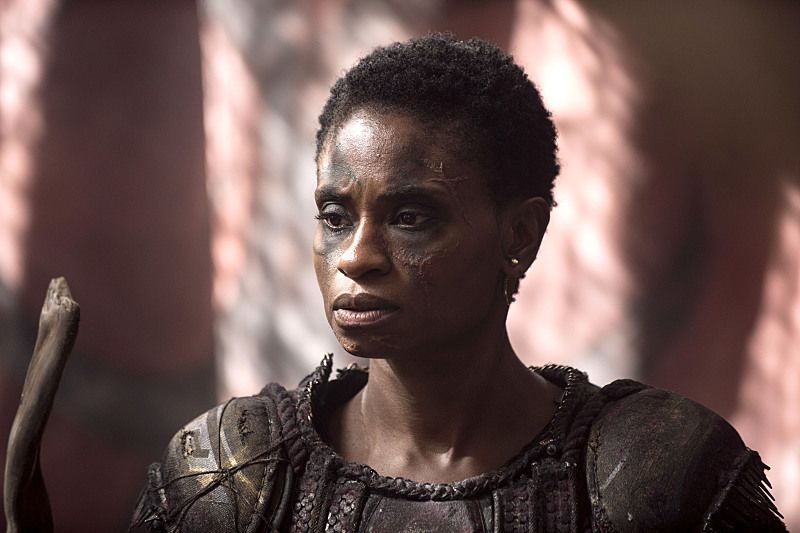 In the CW’s apocalyptic thriller THE 100, mankind has not fared well in the 97 years following a nuclear holocaust.  A portion fled into space and have only recently returned when their oxygen supply became perilously low, and those that stayed on Earth have been fractiously divided in clans that fight for the precious resources and the right to exist.  After the Season 2 finale, which saw the eradication of the Mountain Men, what remains are 12 clans of Grounders, which have a very tenuous alliance that threatens to collapse at any moment.  Temporarily aligned in order to secure the rescue of their people from Mount Weather, as Season 3 opens, that alliance among the Grounder clans is on the verge of breaking apart — especially when the Ice Nation clan moves to challenge Lexa’s authority.

Known for her fierce and loyal heart, Indra (Adina Porter) is the backbone of Lexa’s military.  But in the shifting sands of political alliances has forced Indra into a position she never thought she would ever be in:  wondering just whose side she is fighting for and if it is the right one?

Season 2 of THE 100 was pretty kickass.  It was a breath-taking, thrill-ride.
ADINA:  Thank you!  I think in Season 3 that we’re going to continue to kickass.  There will be a lot of different surprises.  It’s quite a ride.  You are going to see more of the world.  You are going to see more of the Ground culture and why they are who they are.  The variety of cultures.  And understand why being a fierce female warrior is not unusual in the Ground culture.  It’s very common.

It is great seeing women portrayed as authority figures and in dominant leadership positions, and being so widely accepted and known as such.
ADINA:  As an actor, I very much appreciate it.  It has been my experience that in every role that I have done, it’s either impacted into something that is happening already in my life or it has become a catalyst or hint to go towards whatever it is that this role is asking of me — and I very much appreciate cultivating my inner-badass.  I’ve developed a little bit of a strut that definitely is Indra and has become a bit Adina — and I’m not apologizing for it! [Laughs]

So in this upcoming season, we are a bit more immersed in Grounder culture and their politics.  Lexa (Alycia Debnam-Carey) makes some very controversial decisions.  Is Indra going to be completely behind all that?
ADINA:  Indra has always, and is always, been a very loyal subordinate to Lexa and to all of her commanders.  In Season 3, you are going to see — well, you know Indra, the warrior — you are going to see a bit more of Indra, the person, the human, and the woman.  She begins to question a little bit decisions that have been made.  She has always wanted her people to survive and thrive, but you’re going to see that Indra is going to become more fleshed out and, therefore, you will see her insecurities and vulnerabilities and her questioning more.

We also see the predominance of the Ice Nation people, which is a bit more terrifying than what we had heard about previously.
ADINA:  Yeah.

So there has to be some questioning involved, because when you have a threat that is that strong at your doorstep, people need to think about:  “What decisions have been made?  Can we stand behind it? And will we survive it, if we do?”
ADINA:  It has always been Grounder culture to follow and it has been predesignated to be their leader — and if you begin to question that, you can have the same type of anarchy that happens with the Sky People. So Indra is kind of torn between tradition and also perhaps because of the influence of the Sky People and starts questioning if their leaders are making the right decisions.

At the beginning of Season 3, how does Indra feel about the Sky People?  I don’t even think she considers them an ally at that point.
ADINA:  She chooses to make a few alliances out of necessity, and Kane (Henry Ian Cusik) is one of those alliances.

That is an interesting dynamic.  What was it like working with Henry?
ADINA:  It was magnificent!

Kane is making interesting choices as well.  He seems to innately understand that they need an alliance with the Grounders — otherwise, they will not survive.  I would think that Indra would have the same like-mindedness in knowing that having an alliance with the Sky People and access to their technology would be mutually beneficial as well.  Is Indra willing to stand by an alliance like that?  Or is Indra going to be so proud of her own culture that she feels they can stand alone?
ADINA:  That is where the questioning comes in.  Because Indra is extremely proud of her culture and also there is so much danger that the technology has brought to her people.  I mean, that technology was a missile that blew up her village.  So she makes alliances where she has to and I think all throughout Season 3 — I mean, in Season 1 and 2, you knew who your enemies and your friends were by the clothes they wore — you don’t know that necessarily now.

It’s about “the enemy within.”
ADINA:  Yeah.  You’ve got to choose people and someone might be your friend in the morning, but a choice might happen where that person might be your enemy by the afternoon.

Why is there such a distrust of the Ice Nation people?
ADINA:  I think there is a lot of ego involved.  You are also going to see the Grounder culture that there are some beliefs and superstitions that come along with killing and surviving.  Like, you never see my back, well you see a little bit of it, but the amount of scars that Indra has on her back is how many people that she has killed.  And it is believed that you gain power from the soul that you take away.  But also, when you are killing a person with a sword, it is one-on-one and you can see how you take that power as you take their life.  However, the Sky People kill with technology in mass.  So the Grounders have to readjust their belief system and maybe even their religion and culture because of the way that the Sky People kill and the amount of people that they kill. And Indra chooses to make alliances with the Sky People because they are not going away.

Indra is savvy enough to recognize that the Sky People have tools that she might like to have access to.
ADINA:  Isn’t not just savvy, it’s about survival and because of how it can change everything.  The Grounders have knitted together a very fragile connection with all the various different Grounder tribes, and the Sky People came in and they really disrupt this very intricate web of connection.  And what worked in the past, where there were no Sky People around, can’t work anymore.  So they have to adjust.  They have to change.

Another interesting thing was:  why didn’t Indra want to go after and kill Clarke (Eliza Taylor), and take Clarke’s power for herself?
ADINA:  Because Indra respects her culture and respects her place.  She is not the Commander.  Lexa is the Commander. So she believes in that tradition and will respect her Commander’s wishes — until it gets to a point where she can’t. Until then, she is going to respect the wishes of her culture and her Commander.

To see what terrible cross Indra bears and how she is caught in the crossfire of the Grounder politics, be sure to tune in for the premiere of THE 100 on Thursday, January 21st at 9:00 p.m. on the CW.