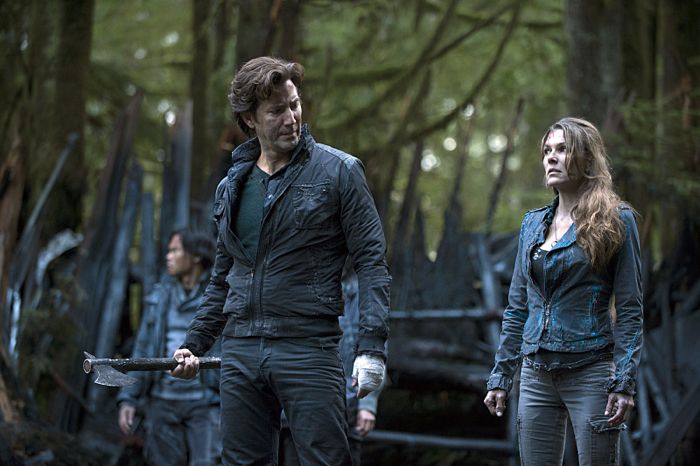 After that brutal cliffhanger at the end of Season 1 for THE 100, fans are going to be biting their nails in anticipation of the Season 2 premiere.  For one, the series’ heroine Clarke (Eliza Taylor) was last seen waking up in a white, sterile medical facility – assumingly captured by persons unknown from Mount Weather.  Also still unknown were the final fates of Bellamy (Bob Morley) and Finn (Thomas McDonell), who for all appearances were charbroiled in the blast that was intended to barbeque the attacking Grounders and Reapers.  So there is a lot to worry about as Season 2 returns.  But rest assured, the writers of THE 100 have come up with some spectacular, if not downright creepy, twists and surprises.

Having previewed the Season 2 premiere, here are ten teasers of what fans can look forward to when THE 100 returns.

Unexpected Ships
Forget the Bellarke (Clarke and Bellamy) and Flarke (Finn and Clarke) ships, this season is all about two new ships on the horizon.  Just when you thought the show was done with pairing the least likely people together, they then throw another ship or two into the mix – and I am not talking about Abby (Paige Turco) and Kane (Henry Ian Cusick) — though I’m kind of on board with that one too.  Look for a new lady-love for Jasper (Devon Bostick) and perhaps one for resident bad-boy Murphy (Richard Harmon).

Rising From the Ashes
That’s right, Murphy is back.  No matter how many times he was tortured, strung up or generally wished dead, that bad-seed is back with a vengeance.  But who doesn’t love a bad boy who is trying to be good?  Well, maybe Murphy is not really trying that hard to wear that ill-fitting white hat.  But surely I cannot be the only one to fall under Murphy’s spell as the writers for THE 100 seem to have given him some of the best lines in Season 2.  Prime example, Murphy:  “Don’t shoot.”  (Spoiler): “Why not? You shot me.”  Murphy:  “Yeah, I would have shot me too.”  Another great exchange, (Spoiler): “What are you doing here?” Murphy: “Dying. Same as you.”  (Spoiler): “Why are you helping me?”  Murphy: “I don’t want to die alone.” Two more fun Murphy quotes:  “So do I get a gun now?” and “And you thought I was the crazy one.” Trust me, you will be cracking up as Murphy delivers these lines.  The humor many not be intended, but the delivery makes you smile and maybe just swoon a little. (Totally didn’t expect to be Team Murphy in Season 2!)

Guess Who Is Coming To Dinner
Let’s just say that Clarke gets a very special invitation and naturally things do not go as expected.  Clarke may have only been on Earth for a month or so, but she has learned one thing fast: never trust anyone offering free food.  There may be strings attached or it just might not be the sort of food you thought you were eating.  Worse yet, what if your host thinks you should be the entre of the night?  Okay, maybe the Mount Weather folks do not share the cannibalistic tendencies of the Reapers, but are they any less safe to have dinner with?

Reunited and It Feels So Good
Reunions are always wonderful and heart-warming, except when it is not with those you really want to see.  Just like the fans, Clarke only has one thing on her mind – or rather make that two things:  Bellamy and Finn — and no one is getting in her way of finding out what happened to the two men in her life.  So pity anyone who does gets in Clarke’s way.  She has learned a trick or two about survival, and the pretty face is mighty deceiving.  Just how quickly will Clarke be reunited with the missing 48 or even the Ark survivors?  Not soon enough to suit Clarke.

Badass Women
Following the lead taken in Season 1, Season 2 looks to the female characters to be more badass than their male counterparts.  With the male characters either missing or unwilling to take a stand, it is left up to the women to take on the role of hero, leader and savior.  Fortunately, Clarke, Raven (Lindsey Morgan), Octavia (Marie Avgeropoulos), Anya (Dichen Lachman), and Abby are up to the task.  Whatever the challenge is before them, these incredible women will kick down doors, take off heads, or generally destroy anything in their path that threatens the ones they love.  And each of them is given their moment to shine, no matter how battle-weary or broken they may be.

Unexpected Allies
There is a popular saying, “the enemy of my enemy is my friend.”  THE 100 employs this proverb and puts it to good use every chance it gets.  The tricky thing is to figure out which enemy might serve as an ally against a common enemy – choose wrongly and suddenly you are in a worse position than before.  So testing bonds of friendship, the loyalty of allies, and finding ways to manipulate or win over an enemy is a huge part of what our heroes must do to survive.  As demonstrated in Season 1, each day on Earth is a battle, with new battle lines and new enemies.  So making friends and gaining allies is never as easy as expected.  But a wary enemy still might be just what you need in a pinch.

Last Resort
When last seen, Chancellor Jaha (Isaiah Washington) was toasting the success of crashing the Ark down on Earth and counting down the hours to his own demise as the life-support systems failed one by one on the space station.  But when faced with an even more terrifying prospect than dying alone in space, Jaha rises to the occasion and searches for one last way to save himself.  Just what compels him to make one last stand as survival? Listen carefully as episode 201 ends.  That sound will either drive Jaha insane, beyond the limits of his already fractured psyche, or will be his salvation.

Who Is Afraid of the Dark?
After discovering that there are not only Grounders roaming around and there are the equally vicious Reapers scuttling about in the woods, there is much to be feared that is not seen under the cover of darkness.  So now that the Mount Weather folks have proven to be just as likely to strike when least expected, the question becomes:  who should the Ark survivors truly fear?   Who is really hiding out in the dark?  And what if it is another group that we have not met yet?  Only one thing is certain: there is something or someone out there – and it is not likely a friendly force ready to welcome the Ark survivors with open arms.

Rules To Live By
With so many opposing forces literally ready to strike them down before their next breath, just what place do the rules have in everyone’s lives?  Mount Weather, the Grounders, the Reapers and the Ark survivors all have their own rules that they insist everyone live by.  But is there a place for rules when the world as they know it has changed dramatically?  Poor Kane is beside himself as he tries to reassert Ark law now that everyone is on Earth.  The same goes for those militant Mount Weather people.  They have their own rules that must be obeyed just as religiously.  Plus, we have only seen the surface of how brutal the Grounder rules are.  Surely, they have a few they would like to enforce if given the chance as well.  So beware the rules and worry for those who break them.  Justice will be swift and merciless.

The Radiation Secret
Remember all the way back to the first episode of Season 1, when a hundred kids condemned to die were sent to Earth to find out if it was habitable after 97 years?  To find out of the radiation levels had dissipated enough to make it safe for humans to return to Earth from the dying Ark?  Well, that storyline is picked up and becomes a vital piece to the global puzzle in Season 2.  There will be a good explanation as to why Earth was no longer toxic to the Ark survivors or to the Grounders and Reapers.  It also offers a big clue as to what the Mount Weather folks are doing in their deep-beneath the earth bunker.  The debate as to whether radiation is “friend or foe” falls into the spotlight and it will determine the fates of them all.

With those teasers in mind, be sure to tune in for the Season 2 premiere of THE 100 on Wednesday, October 22nd at 9:00 p.m. on the CW.  (And watch out for episode 203, that episode tosses out a few proverbial hand grenades that explode in ways no one is anticipating.)