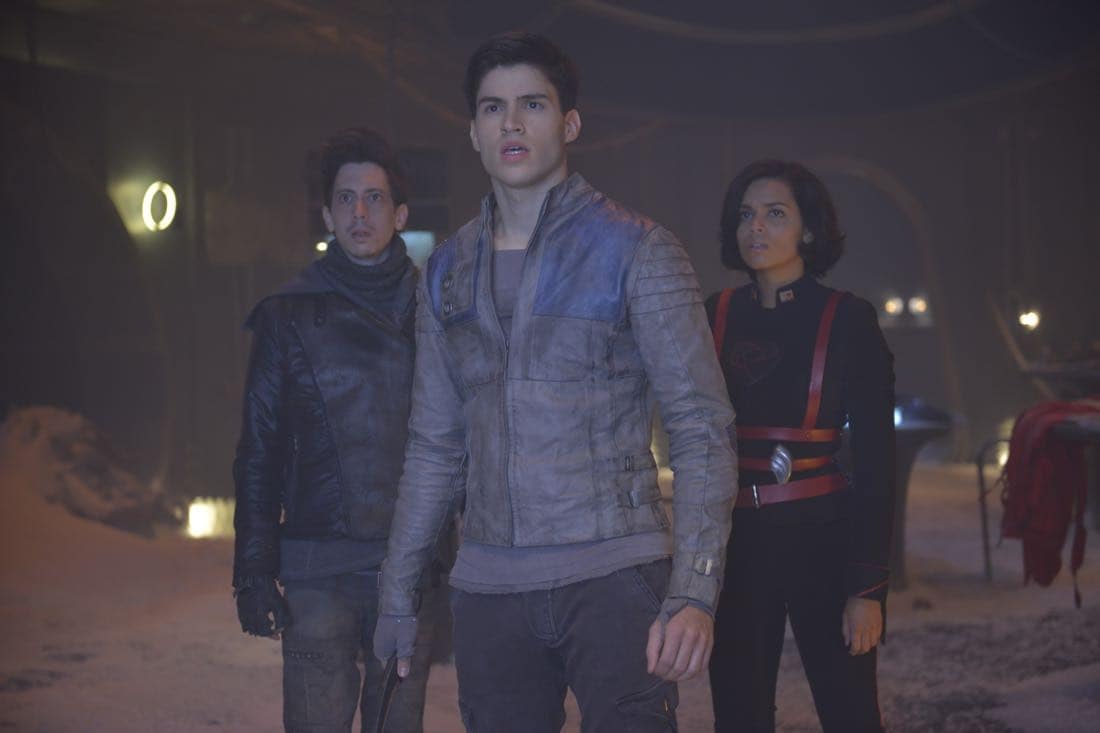 “SYFY is partnering with the biggest names in the business to tell the boldest stories in the sci-fi world, and I can’t think of any bigger and bolder than KRYPTON, HAPPY! and NIGHTFLYERS,” said Chris McCumber, President, Entertainment Networks, NBCUniversal Cable Entertainment.

Set two generations before the destruction of the legendary Man of Steel’s home planet, KRYPTON follows Superman’s grandfather (Cameron Cuffe, “The Halcyon”) — whose House of El was ostracized and shamed — as he fights to redeem his family’s honor and save his beloved world from chaos. Based on DC characters, KRYPTON is from Warner Horizon Scripted Television and is executive produced by David S. Goyer (“Man of Steel,” “Batman v Superman: Dawn of Justice,” “The Dark Knight” trilogy) through his Phantom Four banner. Damian Kindler (“Sleepy Hollow”) will serve as executive producer and showrunner.

The pilot teleplay was written by Goyer and Kindler, from a story by Ian Goldberg (“Once Upon a Time,” “Terminator: The Sarah Connor Chronicles”) & Goyer, with Colm McCarthy (“She Who Brings Gifts,” “Peaky Blinders”) serving as director and co-executive producer. KRYPTON is based on characters created by Jerry Siegel and Joe Shuster, published by DC.

SYFY and Universal Cable Productions are developing a supernatural thriller based on author George R.R. Martin’s (“Game of Thrones”) epic novel NIGHTFLYERS. Set in the future on the eve of Earth’s destruction, a crew of explorers journey on the most advanced ship in the galaxy, The Nightflyer, to intercept a mysterious alien spacecraft that might hold the key to their survival. As the crew nears their destination, they discover that the ship’s artificial intelligence and never-seen captain may be steering them into deadly and unspeakable horrors deep in the dark reaches of space.

NIGHTFLYERS joins previously announced high-profile projects in development at SYFY including BRAVE NEW WORLD, a scripted series based on one of the most influential genre novels of all time, with Steven Spielberg’s Amblin Television; HYPERION, based on Dan Simmons’ Hugo Award-winning bestselling novel, which is being developed with Oscar®-nominated producer Bradley Cooper (“American Sniper”), Oscar-winning producer Graham King (“The Departed,” “Argo”) and Todd Phillips (“The Hangover,” “Old School”); and STRANGER IN A STRANGE LAND, based on the groundbreaking science fiction novel by Robert Heinlein. BRAVE NEW WORLD and HYPERION are from Universal Cable Productions, while STRANGER IN A STRANGE LAND is a co-production between Paramount Television and Universal Cable Productions.

KRYPTON and HAPPY! will join a rich 2017-18 lineup of original scripted series on SYFY, including sci-fi drama THE EXPANSE and fantasy series THE MAGICIANS, both greenlit for third seasons for 2018; time travel thriller 12 MONKEYS, greenlit for third and fourth seasons for 2017 and 2018; KILLJOYS, which returns for its third season in Summer 2017; and the CHANNEL ZERO horror anthology, which will return in October 2017 for its second installment.