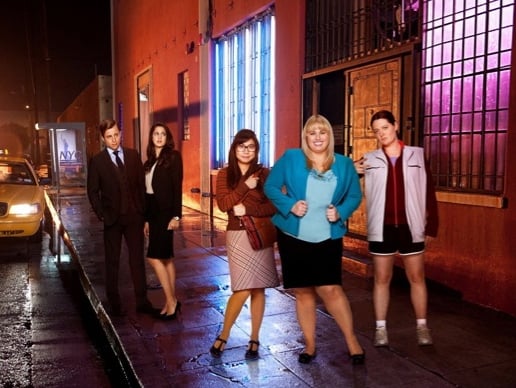 Contrary to what you may have heard, ABC’s SUPER FUN NIGHT is not the worst new sitcom this fall. That dubious honor belongs to Back In the Game. I would rate SUPER FUN NIGHT as third worst, after Back in the Game and Dads. Unfortunately, given its already tarnished reputation, that does not bode well for it.

The reason SUPER FUN NIGHT is entering the fall premiere season with one hand tied behind its back is that critics panned the “Pilot” when it was released to them earlier this summer. ABC decided to combat that by airing the second episode, “Anything for Love,” as the premiere this week. In preparing for this review, I watched only “Anything for Love,” not the “Pilot.”

When starting with episode two, there is clearly a piece missing. We are dropped into the story without being introduced to the characters, save the lead, Kimmie Boubier (Rebel Wilson, Bridesmaids), whom is pretty easy to get a read on. This hurts most in Kimmie’s relationships with her co-workers, especially Richard (Kevin Bishop, Irina Palm), the boss’s son, whom she likes, because it takes a few scenes with Richard to start to get a read on what their relationship is.  We also aren’t shown the origin of the premise, why Kimmie wants to go out for a SUPER FUN NIGHT in the first place, though it does seem kind of obvious.

Given that it seems the plot would have made more sense if the first episode had been watching before “Anything for Love,” the switch smacks of desperation. Now, if the second episode were a lot funnier than the first, knowing that lots of people already proclaimed the first as terrible, and not wanting to risk losing those first-week viewers because of it, then the move would be a good one. After all, with the bad buzz already building, it is time to get desperate. Sadly, “Anything for Love” is not funny.

Kimmie is surrounded by a bunch of caricatures. Kendall (Kate Jenkinson, The Wedge) is the stereotype villain co-worker, jealous of Kimmie for the things Kimmie doesn’t even notice about herself. Even though Kendall appears to have everything going for her, she tries to steal Kimmie’s spotlight, too. And Kimmie’s friends, Helen-Alice (Liza Lapira, Don’t Trust the B—- in Apartment 23) and Marika (Lauren Ash, Lars and the Real Girl), and virtually indistinguishable from one another in this episode, just stock pals who try to cheer Kimie up.

This means that SUPER FUN NIGHT rests completely on Kimmie’s shoulders, and it’s not funny because she’s not funny. The character has been created to be as pathetic as possible, and it’s not fun to watch her be embarrassed. One feels bad for her and wants to help her, not giggle when her dress is pulled off by an elevator and she tries in vain to laugh it off. It’s easy enough to tell she doesn’t find the moment amusing in the slightest, which makes us uncomfortable.

I think the failure is Wilson’s fault, and here’s why. Kimmie is the one character who connects emotionally to the viewers, which makes it impossible to laugh at her misfortune, knowing the pain it causes her, which we can read on Wilson’s expressive face. Were she to play the part of more silly, the show might stand a chance. Not that I’m really advocating for less character development, so the complaint is that Wilson is too good for this material, and doesn’t lower herself to the goofiness of the story, even as she fully commits to the broad, physical comedy.

A scene in “Anything for Love” has Kimmie battling with Kendall to sing at a piano bar, and you will genuinely be frustrated for Kimmie. When she goes big during the song, gaining her confidence, she seems desperate, as she is, and it robs the moment from being entertaining. Were Kimmie only being funny or moving, it might be OK, but by attempting to combine both, neither work. If these bits, the ones in which Kimmie makes us feel, don’t succeed because they try to be funny and fail, the show is doomed just because of its makeup.

Wilson has been stripped of her British accent, which doesn’t seem necessary, given that Richard gets to keep his, and Wilson’s friend from England, Matt Lucas (Little Britain), makes a guest appearance. She does a fine American voice, but it’s still a little weird. I guess the network or someone along the totem pole thought the lead wouldn’t be as relatable to American audiences if they knew she was from another country. It’s a little depressing those that control the show think this, and even more depressing if there’s any truth to the assumption.

With a flawed premise and flat characters, SUPER FUN NIGHT just doesn’t stand a chance. Too bad, as I know Wilson can be funny, and look forward to her next, hopefully successful, vehicle.